After one band cancels, three bands more than make up for it. 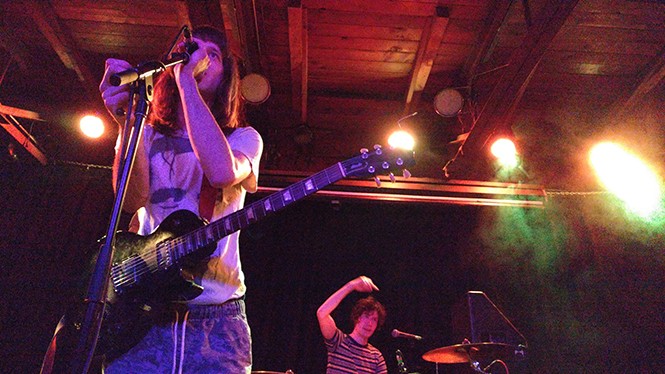 I've spent the last year trying to see The Nods. Tonight, I finally made it. I'm even early. Anticipation tempers the tension accompanying a looming late-night deadline. Then Mike Sartain hands me my first beer, along with some news: "They canceled. One of them is sick." It just so happens that the story due in the morning was gonna be all about requital re: The Nods. (Not that they knew this—and no hard feelings. Hope you feel better soon, Rocky.)

Luckily, I still get to see Muzzle Tung and 90s Television. I'd narrowly missed them both on other bills. More significantly, I missed Koala Temple altogether in my time away from the scene. This one-off reunion gig might be the first and only time I'll ever see them. There is a certain romance to the notion, almost like it's a predestined one-night stand.

As Muzzle Tung singer-bassist Geoffrey Leonard starts a yelping mic-check, a friend shows up and we proceed to imbibe. A waxing buzz suits the band's fuzzy, febrile post-punk songs, which feel like futuristic beat poetry that you can either dance to or stand and contemplate like gallery art. Distractions, however, abound as our group expands. Further contemplation is required and planned.

On the patio between sets, suitably lubed by libations, new acquaintances talk like old friends, and stress wanes. Back inside, the stage is dressed in colorful plush and props: a Fraggle, a baby mask, an E.T. whose raised finger looks more defiant than healing, a Christmas tree, a jack-o'-lantern, a giant two-dimensional Easter egg. And a Tyco Hot Lixx Guitar! It's weird. I love weird, and I really love all four of 90s Television's albums, so full of catchy, well-smithed songs that check some of my favorite musical flavors: power pop, dream pop, psych and surf.

Sucked in, I'm a drunken fanboy trying to snap decent pictures without spilling my drink or missing the real-life 360-degree action around me. References swirl in my dizzy head (Donovan, The Hate Bombs, Spacemen 3). Singer-guitarist Josh Brown, rockin' a Robin Trower T-shirt, hypes the headlining band—somewhat cheekily, considering he and bassist Craig Michael Murray are two-thirds of Koala Temple. He says something about City Weekly declaring this the most important night of the year. Someone in the crowd shouts, "You're doin' fine!" The band proceeds to rocket through the rest of their set, including a delightful and bitchin' Tyco toy solo by Victor Blandon.

This is why we go to rock shows: to escape.

Once more to the patio and back. The stage is clear of all but instruments, gear and cups. Koala Temple will rely solely upon their music, which is as fuzzy and epic as their name would imply, plus lights and fog. Murray, now playing guitar and singing, looks like the lost ginger Beatle and one of the dudes from Angel (both clear influences). Brown now wields the Thunderbird bass Murray used in the last set. Drummer Taylor Clark pounds the skins behind them, and each new song brings more energy and intensity. Murray and Brown get active, whipping their hair, playing on their knees and giving birthday hugs to fans. Clark and Murray trade places to perform the former's song, "Probably Sick."

As the energy builds, so does the pressure of beer on my bladder. Instead of returning to the front row, I watch from the back. Murray is spending more time on the floor and engaging with fans. A sax player, then Blando and his toy axe, make cameos. Behind the crowd, gathered as tightly to the stage as when the set began, happy fans run to and from the bar, happy to have thwarted last call and eager to get back to the show.

Speaking of getting back, I'm mindful of my responsibilities. On my way out, I recall a moment where Murray expressed gratitude for the crowd's interest, "especially on a Wednesday night. Thanks, guys."