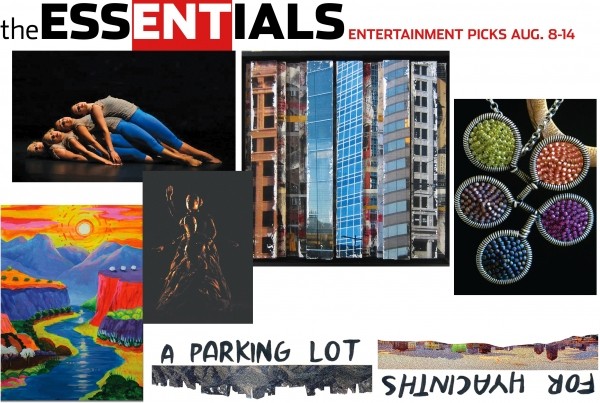 salt 8: Shigeyuki Kihara
Utah Museum of Fine Arts curator Whitney Tassie was surely aware of the difficulties likely to emerge in an ambitious project featuring an artist whose work speaks a different aesthetic language.
The artist is Shigeyuki Kihara, and the UMFA show is the eighth installment of the exciting salt series. Tassie has handled the prodigious project brilliantly, creating an exhibition authentic to the nature of this ambiguous Samoan-born artist, effectively emphasizing meaningful aspects of a complex and nuanced persona.

The primary installation is video; two screens each play a hauntingly rhythmic dance in silence (a screen capture is pictured). The dances originate from indigenous tradition, but Kihara has interpreted them in a manner that can be described as mesmerizing, hypnotic and trance-like. With the camera’s aperture left open to different degrees at different times for desired effect, the body of the artist can be seen flowing through space—leaving its trace on time, and creating a visible presence of temporality even as the face remains, for the most part, hidden.

The artist’s photography has been incorporated with the museum’s works of antiquity in the adjoining Pacific Island gallery, where the foreign photographs seem to be at home. Kihara uses a subjective voice within her art to express the devastation of tsunamis, convey injustices of a people, and to embrace spiritual truths. (Ehren Clark)
salt 8: Shigeyuki Kihara @ Utah Museum of Fine Arts, 410 Campus Center Drive, 801-581-7332, through Jan. 5, $5-$7. UMFA.Utah.edu

Jane Wright @ Caffe Niche
According to artist Jane Wright, qualities in color to effect change on a viewer “can be mild or can be very dramatic, but always very real.” Wright is resolutely interested in the practical relationship between emotion and color, as suggested by “Neon River” (pictured). “Art by its nature responds to my moods, and this can alter the moods of others in a way that is very powerful,” she says. There is a utility to this power to change lives that drives Wright’s impulse: “Color emotively touches deeply within the one who suffers, and they respond in ways that eases their pain as nothing else can.”

Wright’s primary motivator, in addition to her art, is a passionate commitment to advocate for the mentally ill. All the proceeds from her current show at Caffe Niche will go directly to NAMI, the National Alliance for the Mentally Ill, with which she is active in many capacities. Her art is adventurous, and her courage is immense. The world needs more Jane Wrights. (Ehren Clark)
Jane Wright @ Caffe Niche, 779 E. 300 South, 801-433-3380, through Aug. 28, free. CaffeNiche.com

Craft Lake City
SLUG Magazine’s annual Craft Lake City belies its name by being rooted more in the punk DIY culture than traditional homespun crafting. According to Angela Brown, creator of the festival and editor of SLUG, one of her main goals from the beginning has been to change the way people think about crafts, literally trying to re-define the term. To that end, in 2012, the festival added a science and technology component, incorporating tinkering and invention.

This year, to add some more hands-on fun, there’s a Sumo Bot Competition where people will build their own robots to challenge others in categories such as Humanoid R/C, Lego Sumo and Mini Sumo.
As far as culinary arts, there will be plenty of local vendors, food trucks and veggie-dog carts preparing fresh fare. But the craft food category—for culinary artisans who solely sell small batches of prepackaged edibles—is where most of the interesting eats can be found, from exotic chocolates and pickled garden items to hand-roasted coffee beans and cool handcrafted popsicles.

Bringing these various artisans (jewelry by MÃ¯a, of 2 Dots Over the I, is pictured) into one space to interact and enjoy the fruits of specialists’ beloved labors is one of the founding principles of the festival. Add two days of music and general subculture merriment, and people should begin to recognize that the crafty likes of Portland, Ore., and Brooklyn have nothing on this high-desert Craft Lake City. (Jacob Stringer)
Craft Lake City @ Gallivan Center, 239 S. Main, 801-487-9221, Aug. 9, 5-10 p.m. & Aug. 10, noon-10 p.m., free, workshop fees vary. CraftLakeCity.com

Justin Wheatley: Salt Lake City: Chain Link & Welcome Mats
Two-chambered art galleries invite contemplation of the relationship between the artists paired up each month. In addition to the complementary visual balance of painter/mixed-media artist Justin Wheatley and ceramicist Aaron Ashcraft, both artists’ collections at this month’s Art Barn opening are about relationships.

As a relative newcomer, having lived here seven years, perhaps Wheatley can offer some insights on the city that longtime residents might not have, or have overlooked. His works, utilizing elements of photography, painting and collage, create a sense of urban bustle without depicting people directly—rather, their signs of life, whether street signs, architecture or signs of commercial activity. This new work explores secrets of citizens from both the east and west sides of Salt Lake City.

Ashcraft’s Conversations series utilizes textures from the natural world, like wood, drawn on clay. His ceramics, most recently shown earlier this year at Art Access in his Biomimicry exhibit, raise questions of what is “natural,” and our relationship to the natural world.

The conversations between segments of society, urban and rural environments, and these two artists are expanded to include the viewer, and that’s what is most inviting about this show. (Brian Staker)
Justin Wheatley: Salt Lake City: Chain Link & Welcome Mats @ Art Barn, 54 Finch Lane, 801-596-5000, Aug. 9-Sept. 27; opening reception Aug. 9, 6-8 p.m., free. SLCgov.com/arts

Deseret Experimental Opera Company: A Parking Lot for Hyacinths
“Opera” is such a loaded word in contemporary arts. Potential viewers find themselves convinced in advance that they know what to expect, and that the combination of big theatrical emotion and soaring voices is something from another era. As beautiful as it can be, it’s a different world.

Jesse Quebbeman-Turley and the newly formed Deseret Experimental Opera Company are looking to take those preconceptions about opera and transport viewers to an entirely new kind of different world. Yes, it tells a story; yes, it does so with orchestral music and soaring voices; yes, the themes may be somewhat magical and allegorical. But A Parking Lot for Hyacinths is also something … else.

In this one-of-a-kind tale from a libretto by Luke Swenson, a student and would-be musician named James dreams of a figure who bestows upon him silver acorns, which are still with him when he awakes. Seeing in his vision a need to reconnect humanity with nature, James travels to southern Utah, and begins a strange journey of discovery.

Carousel was the second joint effort of the iconic duo, and is considered by many to be one of the finest, if not the finest, musical-theater pieces of the 20th century. It’s a fantastic tale of love, sin and redemption that broke ground on Broadway, making way for darker themes and edgier subject matter. If it hadn’t been for the strength of the writing team, it’s unlikely that producers of the day would have touched it.
Utah Rep is the resident company of the beautiful historic Murray Theater. Check out the architectural masterpiece while enjoying canonical musical theater. (Rob Tennant)
Utah Repertory Theater Company: Carousel @ Murray Theater, 4959 S. State, Friday-Saturday, Aug. 9-24, 7:30 p.m.; matinees Aug. 17 & 24, $15-$18 in advance, $17-$20 at the door, $10 family matinees. UtahRep.org

Utah Opera in the Open Air
Do you remember when you were a kid and your mom told you to use your “inside voice”? Well, the Utah Opera promises to do the exact opposite. In fact, they have pledged on every advertisement to have “brought their outside voices” for this jaw-dropping, vocal-cord-stretching, open-air concert under the stars.

In this evening of choral splendor, you’ll hear the basses, tenors, altos and sopranos of the Utah Opera combined with the solo acts of Celena Shafer, Daniel Belcher, Leah Wool and Chad Shelton in the crisp mountain air of Deer Valley—just a 45-minute drive from Salt Lake City. The company will showcase songs from Carmen, The Pirates of Penzance and La Traviata, among others, under the direction of conductor extraordinaire Jerry Steichen.

St. George Dance Company
Summer Robertson and her St. George Dance Company, along with guest choreographers, will present an evening of original pieces two nights this weekend at Sugar Space. From a dance inspired by a video game to a solo work exploring how a child might move past the pain of playground insults and taunts, the performance showcases a wide variety of themes and local flavor.

The company—formally called Summer & Co.—was reformed in 2008, when Robertson moved back to her hometown of St. George. Robertson’s journey through the dance world has taken her from Utah to North Carolina to New York City, where she lived and worked as a choreographer, and back home again. Melding years of technique and experience with inspiration from her home state, Robertson and the St. George Dance Company promise to bring unique contemporary dance to the Utah scene, while drawing attention to St. George as a place to find beauty in more than just red rocks. (Katherine Pioli)
St. George Dance Company @ Sugar Space, 616 Wilmington Ave. (2190 South), 888-300-7898, Aug. 9-10, 8 p.m., $10-$12. TheSugarSpace.com

Ballet West: Beer & Ballet
One might assume that the appropriate beverage to pair with the traditional performance art of ballet might be a fine wine. But when you have such fine locally brewed beer readily at hand, it seems fitting that Ballet West chose to go with the more hoppy concoction for its latest fundraising event.

Ballet & Beer is an evening soiree, co-hosted by Epic Brewing and Blue Iguana, where guest can wander about the Rose Wagner Performing Arts Center with glass in hand. While sipping award-winning ales and lagers, they will be entertained by a private performance consisting of newly choreographed works by Ballet West artists, as well as the acoustic-guitar musical stylings of Sammy Brue, a 12-year-old “troubadour in training.” There will also be drawings throughout the night for goods donated by local retailers. But the best excuse to get out and drink is that all the proceeds go to support the many educational and artistic programs of the dance company. (Jacob Stringer)
Ballet West: Beer & Ballet @ Rose Wagner Center, 138 W. 300 South, Aug. 10, 5:30 p.m., $35. BalletWest.org