Usually, the beginning of the Salt Lake Bees baseball season marks the end of a long Utah winter and hope for warmer days ahead. Even though we pretty much skipped winter in Salt Lake City this year, this is still a time to celebrate, as the Bees open their 21st season this week, and we enjoy the return of the national pastime at Smith's Ballpark. The Bees—the Pacific Coast League AAA affiliate of the Los Angeles Angels of Anaheim—opened the season on the road in Sacramento on April 9. The home opener on April 17 is the first of 72 home games running through Sept. 3. Fireworks will follow the opener and will also be shot off on July 4, July 24 and several other nights. Special events scheduled for this season include Beard Appreciation Night (April 24), Mother's Day Brunch (May 10), a Bobblehead Giveaway (June 6) and a Throwback Night on Aug. 1, paying tribute to the Salt Lake Gulls, who played from 1975-1984 at Derks Field (where Smith's Ballpark now sits). There also will be various weeknight deals throughout the season. Get $1 hot dogs on Wednesdays, or grab three friends on Mondays and get four tickets plus hot dogs for $20 by saying you are "family." Whether we're coming out of a rough winter or no winter, the return of the Bees heralds warm nights at the ballpark, which is always cause for celebration. (Geoff Griffin) Salt Lake Bees vs. Sacramento River Cats @ Smith's Ballpark, 77 W. 1300 South, April 17, 6:35 p.m., $10-$27,SLBees.com 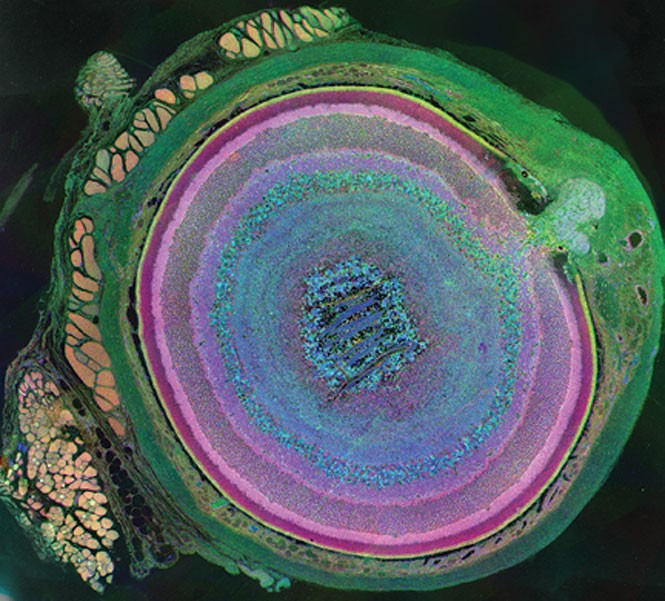 
Art Access—the gallery and the affiliated nonprofit arts organization—helps the disabled and disadvantaged realize their artistic visions. When vision itself is affected by a disability, the artwork on produced by those who seek to treat the disability as well as those experiencing the disability can be especially enlightening. The University of Utah's Moran Eye Center is collaborating with the gallery on an exhibit called Visions, featuring retinal photographs by a number of photographers, and fused-glass sculptures by Sarinda Jones, inspired by retinal art. Professor Bryan Jones is a retinal neuroscientist at the Moran, working on cutting-edge research into the neurology of vision, and his fascination with vision led him into photography. His photographic work, for example, "Metabolomic Eye" (detail pictured) has been featured on NPR's Science Friday as well as in National Geographic, The Smithsonian, Wired and many other noteworthy publications. His photographic eye is as likely to be drawn to neurons under a microscope as impromptu portraits of colleagues, vistas snapped during travels, the shape of twilit trees on a walk or shattered shop windows—but it's all from a refreshing viewpoint. As is true of all the artists in this exhibit, it reminds us our vision isn't something to take for granted. Participating artists include James Anderson, Michele Banks, Nico Cuenca, Jim Gillman, Bryan Jones, Helga Kolb, Gabe Luna, Paula Morris, Hope Morrison, Scott Peterson, Rebecca Pfeiffer, Stuart Stansbury and Peter Westonscow. The exhibit runs concurrently with the show in theorganization's Access II Gallery including artists who have varying ranges of vision, and even a painting designed to be touched rather than viewed. (Brian Staker) Visions @ Art Access Gallery, 230 S. 500 West, No. 125, 801-328-0703, April 17-May 6, AccessArt.org. 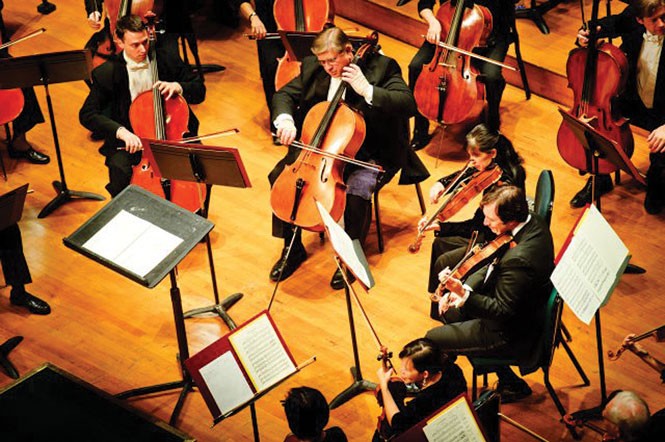 
Jupiter, the Roman counterpart of Zeus, was chief god of the Pantheon, ruler of the sky and hurler of lightning bolts. Wolfgang Amadeus Mozart's Symphony No. 41—nicknamed "Jupiter" when it played in London in the early 1800s for its grandiosity and energy—captures the jovial humor, larger-than-life story and personality of the mythological figure. Throughout all of the movements, different themes emerge: playful but full of grandeur, noble and hearty, intense and anxious (atypical of the Classical period). The final movement of the symphony is as emotionally dramatic as the sky that Jupiter ruled, ranging from powerful and classical, to distressed, with the timpani sounding like thunder. For bonus points, listen for the four-note phrase that becomes a fugue in the fourth movement. This work was among Mozart's last; he wrote his final three symphonies when he was desperate and poor, over three months. His tumultuous personal life is hardly reflected in the brilliant and bright symphony. One hour before the performance, Toby Tolokan, vice president of artistic planning for the Utah Symphony, will hold a free discussion about the evening's pieces for all ticket-holders. The symphony will perform two additional pieces by Mozart as part of this program: Symphony in D after Serenade "Posthorn," and Concerto No. 21 in C major for Piano and Orchestra. (Tiffany Frandsen) Utah Symphony: Mozart's Symphony No. 41 in C major, "Jupiter" @ Abravanel Hall, 123 W. South Temple, 801-355-2787, April 17-18, 8 p.m., $18-$69, UtahSymphony.org

An Evening with Neil Gaiman


When a writer becomes a brand name, it's often because of becoming a powerhouse in a specific medium or sub-genre. Far rarer are cases like that of Neil Gaiman, who has become a superstar for a body of work that runs from comic books to television, from adult novels to children's books, from The New York Times best-seller list to The Simpsons. After an early career as a journalist and book critic, Gaiman broke into the pop-culture world with his work in graphic novels and comic books of the 1980s and early '90s, including Marvelman, Violent Cases and an Eisner Award-winning run on Sandman. As he made the transition to novels and works for children, he still maintained his eye for the fantastical, creating works like Stardust and Coraline which were subsequently adapted as feature films, the 2005 feature film MirrorMask, the creepy kid-lit tale The Graveyard Book and even writing for the long-running BBC series Doctor Who. Yet while Gaiman is unquestionably a writer first and foremost, that doesn't mean his public appearances are merely readings from his published work. His speaking engagements have often shown a unique side of the writer, like his inspiring keynote graduation address at Philadelphia's University of the Arts in 2012. Take advantage of an opportunity to listen to this talented storyteller tell different kinds of stories than the ones you might usually associate with him. Considering the widely varying kinds of stories he's already told, that's saying something. (Scott Renshaw) An Evening With Neil Gaiman @ Eccles Center, 1750 Kearns Blvd., Park City, 435-655-3114, April 18, 7:30 p.m., $20-$69, ParkCityShows.com


In a publishing career that only spans just over a decade, David Levithan has already contributed to several books that provide unique perspectives on the young-adult experience. Sometimes that comes from collaborations—like Nick & Norah's Infinite Playlist with Rachel Cohn or Will Grayson, Will Grayson with John Green—and sometimes it's in solo projects like the fascinating fantasy Every Day, about a teenager who awakens every day to find his/her consciousness occupying a different body. Levithan's latest book, Hold Me Closer: The Tiny Cooper Story, approaches the emotional complexity of teenagerdom from another unusual perspective: It's a "musical novel." More specifically, it's something of a spin-off from Will Grayson, Will Grayson, expanding on the autobiographical musical that one of the novel's supporting characters, gay teen Tiny Cooper, was creating. Take this chance to hear a distinctive voice in young-adult fiction—and maybe even, given the subject matter, the singing voice. (Scott Renshaw) David Levithan: Hold Me Closer: The Tiny Cooper Story @ The King's English Bookshop, 1511 S. 1500 East, 801-484-9100, April 21, 7 p.m., free, KingsEnglish.com