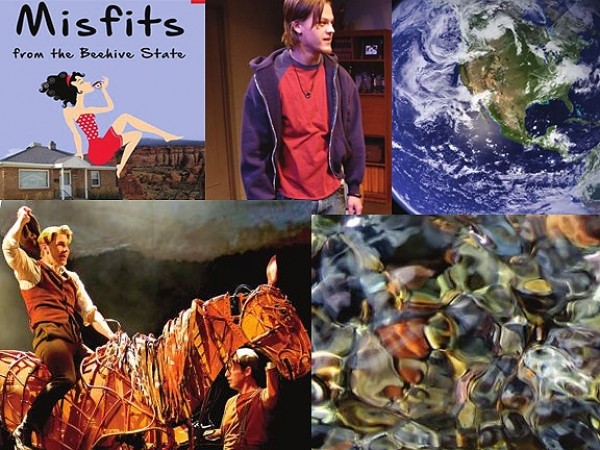 
Utah expatriate Kristin Ann King may now live in Seattle, but her fascinating short-story collection Misfits from the Beehive State shows that she still has a firm finger on the peculiar qualities of the people here in Utah. The 10 stories offer snapshots of people facing the expectations and disappointments of their lives, and watching as they manifest themselves in bizarre—even supernatural—ways. While the stories are all based in or around Utah, King digs into characters who come from a variety of different backgrounds, yet are all affected somehow by a culture that places importance on maintaining an outward appearance of perfection. In “Grandmother Henrietta’s Curse,” a young woman believes that her Lutheran grandmother is taking vengeance from beyond the grave for an LDS proxy baptism she vehemently opposed. “Swallow the Clock” finds a married woman facing a heartbreaking choice while a strange man appears everywhere she goes. And in the magnificently chilling opener “The Wings,” a housewife’s mysterious yearnings manifest themselves in visions of an angel outside her bedroom window. King gives these fantastical elements a matter-of-fact quality that turns them less into horror stories than surreal visions of a Utah where communication with the unseen and not-of-this-world is woven into the psychological landscape. Yet she also finds an urgent realism in the crises faced by her protagonists—mostly women—as they try to navigate through situations where their truest selves have to remain hidden. Join King this week for a reading and signing event, and get an introduction to these intriguing misfits. (Scott Renshaw)
Kristin Ann King: Misfits From the Beehive State @ Weller Book Works, 607 Trolley Square, 600 S 700 East, 801-328-2586, April 17, 6 p.m., free. WellerBookWorks.com

Doug Benson
Comedian Doug Benson loves weed. He starred in the documentary movie Super High Me, he wrote and toured the Off-Broadway hit The Marijuana-Logues (not to mention the book that followed, The Marijuana-Logues: Everything About Pot That We Could Remember). He’s even been named High Time Magazine’s Stoner of the Year. But for being a self-described pothead, Benson sure is productive. He has several podcasts (Doug Loves Movies and Get Doug With High), and does regular television stints and seemingly nonstop comedy tours. The secret? Consuming inebriating substances might just run in the family. Benson does a bit where he sits down to have a few drinks with his 85-year-old grandfather. At some point, he turns to his grandpa and says that he probably should stop, because he thinks he might be drunk. His grandfather casually replies, “You’re not too drunk until you have to grab the grass to keep from falling off the earth.” (Jacob Stringer)
Doug Benson @ Wiseguys West Valley, 2194 W. 3500 South, 801-463-2909, April 17, 7:30 p.m., 18+, $20. WiseguysComedy.com

Allyn S. Hart: Seeing Through Water
There has been one constant in Allyn S. Hart’s eventful, unconventional life: her multi-disciplined dedication to making art. The variable for Hart has been her choice in media; she usually opts for an artistic view of the natural world through a unique lens true to her sensibilities. “The choices about what to keep, how to best arrange and display what I want to reveal, shapes the final photograph,” Hart says in her artist’s statement for Seeing Through Water. She’s referring to a photographic method whereby she can have an ongoing relationship with nature while digital photography grants her a rapid-fire shooting process; she can enjoy the outdoor experience and leave the curating until later. Hart is currently exploring water as her subject, making use of reflection, light and shadow, contrasts, color, top surfaces and underlying surfaces. From these elements, she works wonders with Photoshop, allowing the beauty of water to resonate with glorious results. (Ehren Clark)
Allyn S. Hart: Seeing Through Water @ The Gallery at Library Square, 210 E. 400 South, 801-524-8200, through April 25, free. SLCPL.org

Utah Symphony: Mahler’s Symphony No. 5
After Gustav Mahler’s Symphony No. 5 premiered in 1904, he’s alleged to have lamented, “Nobody understood it. I wish I could conduct the first performance 50 years after my death.” Mahler died in 1911, and more than 50 years later, in the 1960s, Maurice Abravanel held the baton when the Utah Symphony heightened its reputation with recordings of Mahler’s works. More than 100 years after the composer’s death—and nearly 50 years after the Abravanel recordings—the tradition continues as maestro Thierry Fischer takes the orchestra through Mahler’s Symphony No. 5. Hopefully Mahler is smiling somewhere. Mahler is the anchor for a varied evening of music that includes two works by American composer Elliott Carter, featuring percussionist Colin Currie. Pachelbel’s Canon in D is also on the program. You’ve heard it played dozens of times at just about any wedding, graduation, funeral, baptism, talent show, etc., you’ve ever been to. This is your chance to hear it performed by a professional orchestra. (Geoff Griffin)
Utah Symphony: Mahler’s Symphony No. 5 @ Abravanel Hall, 123 W. South Temple, 801-355-2787, April 18-19, 8 p.m., $18-$69. ArtTix.org

Salt Lake Acting Company: 4000 Miles
Vera (Joyce Cohen) and her grandson Leo (Austin Grant)—the central characters of Amy Herzog’s 4000 Miles—have trouble communicating as soon as Leo enters Vera’s Manhattan apartment in the opening scene. He can’t understand her because she’s not wearing her false teeth; she can’t understand him because of her hearing problems. And it’s a terrifically efficient way of setting up a story about communication that should be easy turning out to be surprisingly hard. Vera and Leo seem like they’re philosophically simpatico; she’s an old-school Marxist, and he’s a new-model progressive who’s been riding his bike cross-country. Yet Herzog’s wonderful text finds these two people wrestling with the problems that haunt them—a recent tragedy for Leo, age-related health issues for Vera—and are unable to process them with the people in their lives who should be there to help, even when “family” is defined by much more than blood relation. Salt Lake Acting Company’s production is anchored by wonderful chemistry between Cohen and Grant, capturing a familiarity that’s still complicated by their new living arrangement. Cohen in particular is a delight, embodying the frustrations of a senior whose every sentence seems to include “whaddaya call it?,” while also bringing subtle physical humor to moments like an incredulous eye roll at Leo’s late sleeping. Wonderfully memorable supporting turns by Lily Hye Soo Dixon and Shelby Andersen flesh out a simple, human story that never over-reaches in trying to understand the emotional distance that can keep people from loving one another. (Scott Renshaw)
4000 Miles @ Salt Lake Acting Company, 168 W. 500 North, 801-363-7522, through May 4, Wednesdays-Saturdays 7:30 p.m., Sundays 1 p.m. & 6 p.m., $15-$38. SaltLakeActingCompany.org

Salt Lake City Marathon
Celebrated Japanese novelist and noted long-distance runner Haruki Murakami noted that, “As with marathon runs and lengths of toilet paper, there had to be standards to measure up to.” As such, the marathon has become a standard bucket-list item for everyday athletes wanting to push themselves to the physical limit. The Salt Lake City Marathon has become such a target for many locals, as well as many international runners looking to get into more prestigious events like the ones in Boston or New York City. Not just a 26.2 mile race, though, Salt Lake City’s event also boast a half-marathon, bike tour, 5K, youth marathon and a Quality of Life Expo. As most runners know, there’s a natural high that comes from pounding the pavement mile after mile that you just can’t get anywhere else. As Murakami himself wrote, “All I do is keep on running in my own cozy, homemade void, my own nostalgic silence. And this is a pretty wonderful thing. No matter what anybody else says.” (Jacob Stringer)
Salt Lake City Marathon @ various locations; finish-line festivities at Library Square, 210 E. 400 South, April 19, $20-$130. SaltLakeCityMarathon.com

Mary Roach: Gulp
What do you get when you combine science and humor? You may think those two topics are not compatible, but think again; award-winning author Mary Roach proves that not only does the pairing exist, but also that it’s well worth the journey of discovering obscure facts that you may have wondered about but were afraid to ask. Best known for books like Stiff: The Curious Lives of Human Cadavers and Bonk (which looked at sex researchers), the author’s fans know she is not afraid to tackle taboo topics. Roach’s latest book, Gulp: Adventures on the Alimentary Canal, transports readers into the tube that reaches from our mouth to our rear, confronting burning questions like, “How much can you eat before your stomach will burst?” and “Did constipation kill Elvis?,” with her signature witty style. (Aimee Cook O’Brien)
Mary Roach: Gulp @ Salt Lake City Main Library, 210 E. 400 South, 801-524-8200, April 21, 7 pm., free. SLCPL.org

Earth Day
The very first official Earth Day was held on April 22, 1970. For all intents and purposes, that day marks the birth of the modern environmental movement. Yep, it’s only been 40-some-odd years since we’ve collectively been trying to save our planet. Although it’s officially just one day each spring, Earth Day celebrations have effectively overtaken several weekends in late April. Here in Utah, there are diverse festivities and fairs all around—like at Alta Ski Resort (April 19, Alta.com) and at the Utah Museum of Fine Arts (April 19, UMFA.Utah.edu), both happening the weekend prior to Earth Day proper. There’s even a gathering focused on sustainable building called Earthship Biotecture at the Post Theatre on the University of Utah campus (April 19, Earthship.com), and a Party for the Planet at Hogle Zoo (April 26, HogleZoo.org). Some of the first outdoor festivals of the year are also part of the fun, like The Live Green Fest (May 3, LiveGreenSLC.com). Or if you can’t wait quite that long, there’s always Earth Jam (April 26-27, Earth-Jam.org), filled with music, dance and general goddess worship, this year occurring in beautiful Liberty Park. It’s great that 40 years after the original Earth Day, there are still so many ways to celebrate it. If the founders had their way, such festivities wouldn’t be limited to April 22, or the weekends surrounding it. No, Earth Day would be each and every day. It’s a perfect reminder that it’s the little things that count the most, like consciously choosing to bike, recycle or plant a tree. (Jacob Stringer)
Earth Day @ various Utah locations, April 18-22. EarthDay.org

Broadway Across America: War Horse
Stagecraft allows for—demands, in fact—different ways to tell stories than other media may permit. Sure, Steven Spielberg can make a film version of Michael Morpurgo’s 1982 novel War Horse and re-create the real trenches of World War I Europe, following a real horse on a journey that connects many different characters touched by the war. But for Nick Stafford’s theatrical adaptation, a different approach was required—one that brought the titular equine to life as an elaborate puppet. The 2011 Tony Award-winner for Best Play follows the basic story, familiar from the novel and the film, in which a foal named Joey is bought by a poor English farmer and becomes the beloved companion of young Albert. But when Albert’s father runs out of money, he sells Joey to the cavalry in 1914, sending the horse on an odyssey across Europe. And when Albert becomes determined to find Joey, he experiences the war firsthand as well. While Morpurgo’s basic story provides a compelling portrait of the unique horrors of the Great War tamed to be understandable from a child’s perspective, this stage is certainly most fascinating for the way the Handspring Puppet Company has re-created its horse characters for the stage. As emotionally affecting as it may be to watch a variation on a “boy and his dog” story that shows connections of love in a place of war, it may be even more amazing to see an audience become emotionally connected to a man-made animal. (Scott Renshaw)
Broadway Across America: War Horse @ Capitol Theatre, 50 W. 200 South, 801-355-2787, April 22-27, Tuesday-Thursday 7:30 p.m., Friday 8 p.m., Saturday 2 p.m. & 8 p.m., Sunday 1 p.m. & 6:30 p.m., $40-$75. ArtTix.org