According to Utah Museum of Fine Arts curator Whitney Tassie, "When artist Duane Linklater first told me he wanted to engage with the UMFA's American Indian collection to create his salt 11 exhibit, I was a little apprehensive"—in part, due to a perceived trend of artists appropriating Native American objects for their own sake. Linklater has a degree in native studies in addition to a master of fine art degree and, according to Tassie, "repeatedly addresses the ongoing legacy of colonialism in his work." The customary methods of securing these antique objects are under criticism by artists such as Linklater. Additionally, such objects are often presented simply as ethnic artifacts in museum collections. Without authorship, they're treated less as works of art than as something "other," to be looked at simply for their different-ness, and not for the sake of any historical artistic quality. The process through which Linklater approaches these objects from the UMFA collection—re-creating them with a 3-D scanner to be produced in off-white plastic resin—is a process that evokes the Western objectification of Native American art. Taking an object such as Raven Mask (pictured above, right), and looking at it purely for the sake of its structural qualities, without authorship or historical context, and because it belongs to the UMFA, is akin to looking at Linklater's own "UMFA1981.016.002" (pictured above, left) simply for the sake of its formal qualities. It is an object made like any other, and its Native American context should neither be glorified nor subverted. (Ehren Clark) salt 11: Duane Linklater @ Utah Museum of Fine Arts, 410 Campus Center Drive, University of Utah, 801-581-7332, through Aug. 2, included with $9 museum admission. UMFA.Utah.edu 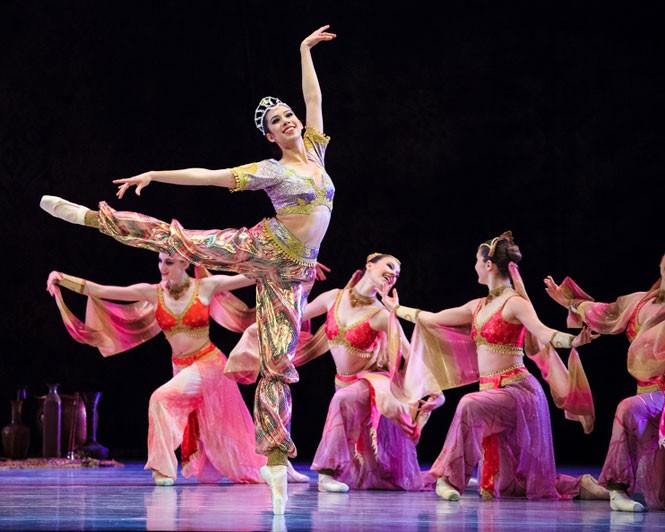 
It seems like every professional ballet company worth its salt has produced its own creative rendition of Aladdin. In 2013, Ballet West's principle ballet mistress, Pamela Robinson-Harris, along with former company soloist Peggy Dolkas, choreographed their version of the ballet for the company's popular family series. This spring, that original piece of choreography returns to the Capitol Theatre. Many are familiar with Aladdin from the popular1992 Disney animated film, but the epic One Thousand and One Nights (also known as Arabian Nights) story of Aladdin—a young orphan living on the streets, who wins the love of a princess with help from a magic lamp, a genie and three wishes—has been told since the third century. French scholar Antoine Galland translated and introduced the tale to Western audiences in the early 18th century, and it soon found its way into books and onto the stage. The cast for this family series production comes from the ranks of Ballet West II, Ballet West's professional training division, and includes students from the Ballet West Academy. But, according to Peter Christie, director of education, it's not a children's ballet. "It is a charming ballet, very appealing to families," Christie says, "with the same professional quality as any of our other performances." And, with a running time of only 80 minutes, it's a great introduction to dance for all ages. (Katherine Pioli) Ballet West II: Aladdin @ Capitol Theatre, 50 W. 200 South, 801-355-2787, April 3, 7 p.m.; April 4, 10 a.m., 2 p.m. & 7 p.m.; April 5, 2 p.m.; $15-35. ArtTix.org


Navigating the emotions and experiences of adolescence is rough, but LGBTQ teens face an additional layer of challenges, including harassment, bullying and abuse. At a time when queer students are attempting to refine the focus of their identity, they have more difficulties hurled in their paths. Out Loud was a six-week workshop in which LGBTQ students and allies worked with community artists and art professionals to investigate contemporary art through projects and presentations. It was a welcoming space for them to express their unique experiences and perspectives. The works in this exhibition are the result, and they are a testament to the artists' courage, their creative responses to cultural expectations and stereotypes and the ways in which art helps heal some of the trauma they've experienced along their journeys. The opening-night events on April 3 will include a panel discussion. (Brian Staker) Out Loud Youth Workshop Exhibition @ Utah Museum of Contemporary Art street-level corridor, 20 S. West Temple, 801-328-4201, opening reception April 3, exhibit through June 27. UtahMOCA.org.


Pantomime is similar to mime, in that both art forms eschew dialogue in favor of bodily expression. Mime, though, relies heavily on facial expression to convey emotions and tell stories, whereas straight pantomime typically involves masks that hide those natural expressions, forcing performers to utilize their entire bodies. The beloved Mummenschanz performing-arts company is classically neither, while simultaneously being both. Mostly considered, though, to be more on the "panto" side of the equation, this Swiss company performs without any musical accompaniment. They also use surreal shapes and forms—nondescript blobs and tubes—to mostly hide the performers, while imbuing those inanimate objects with human emotions and feelings. At first it feels a bit odd when, say, a giant Slinky-shaped being appears behind the raised curtain and begins to simply move around the stage. There are no huge crescendos, nothing big and bold besides the surreal image of this non-creature. But that surreal sensibility has defined Mummenschanz as a theatrical performance that feels both retro and modern. Which is fitting, because the company has been performing regularly since its inception in the 1970s. Back then, the art form was unique enough to inspire a long-running and celebrated stint on Broadway. Today, it still feels surprisingly fresh. Yes, they've updated certain routines, and newly engineered materials for the blob-like costumes have certainly helped the illusion. But ultimately, it's that original odd aesthetic (e.g., two human forms with electrical outlets for heads—one a socket, the other a plug—involved in an intricate dance) that keeps the company relevant. (Jacob Stringer) Mummenschanz @ Eccles Center for the Performing Arts, 1750 Kearns Blvd., Park City, 435-655-3114, April 4, 7:30 p.m., $20-$69. EcclesCenter.org 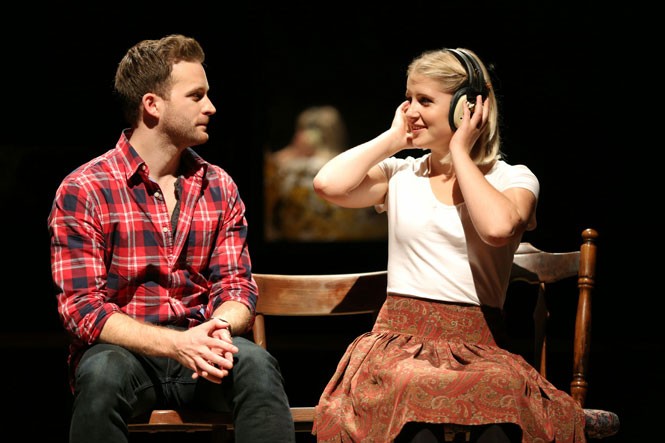 Broadway Across America: Once


Once upon a time, in a long-ago year called 2007, a little movie became an unexpected art-house hit. Written and directed by John Carney, it was a simple musical love story about a guy and a girl—he a busker and musician in Dublin, she an immigrant with her own musical talents—who meet at a time when they need each other creatively and emotionally. The result—Once—was uniquely stirring, and its beautiful anthem "Falling Slowly" went on to win the Academy Award for Best Original Song. But the little movie that could didn't stop there. In 2011, a stage musical version of Once was developed from Carney's film, and featured several new songs by the film's stars and songwriters, Glen Hansard and Markéta Irglová. It's still the same story of a Guy and a Girl and employs a minimalist production style with the musicians, who are characters in the show, also serving as the "orchestra" while remaining on stage. In addition to the film's wonderful songs like "Falling Slowly," "When Your Mind's Made Up" and "Sleeping," additional tunes fill out the plot, including "The North Strand," "The Hill" and "It Cannot Be About That." The result is a show that won eight 2012 Tony Awards, including Best Musical and Best Book. If you adore the movie, you might fall in love all over again as the story plays out live, and those magnificentsongs fill Kingsbury Hall. (Scott Renshaw) Broadway Across America: Once @ Kingsbury Hall, 1395 E. Presidents Circle, 801-581-7100, April 7-9, 7:30 p.m.; April 10, 8 p.m.; April 11, 2 p.m. & 8 p.m.; April 12, 1 p.m. & 6:30 p.m.; $35-$75. Kingsbury.Utah.edu