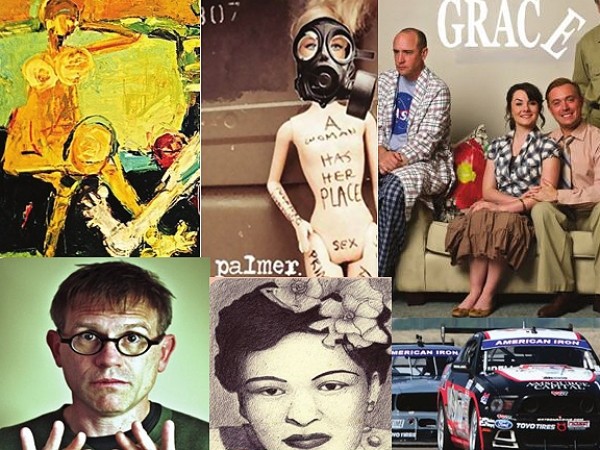 
What drives Deborah Hake Brinkerhoff’s artistic composition is pure impulse. An artist who’s lively and vibrant, she never simply paints an empty attack on canvas. Brinkerhoff first decides general choices of subject, abstraction, figuration, etc. Beyond this, impulse is what builds her compositions and what places her among the most popular painters at Phillips Gallery, where her work is currently on exhibit. What many find so appealing and stimulating about Brinkerhoff’s art is her honesty of approach. Analytical formulas can be at times a tedious interruption of the flow of substance from painter to canvas to viewer. In Brinkerhoff’s case, this relationship is accomplished with liberty and ease. She paints from sensible impulses deep within herself, and cannot possibly describe what she does so instinctively. Painting, for her, is simply an outlet for intensity, so her life can be lived peacefully. It’s true that Brinkerhoff’s large compositions are far from conventional, but it’s a wonderful aspect of her works that people of all milieus of life appreciate. The charmingly titled “Coco and Fuzzy” (pictured) is but one of Brinkerhoff’s canvases that is a simple portrait of a man and a woman. To those who do not know Brinkerhoff’s art, there is nothing simple about it, but for the many who respond to her refreshing artistic impulse, this is just one among her magical many that have arrived with perfect fluency from her heart and her hand. (Ehren Clark)
Deborah Hake Brinkerhoff @ Phillips Gallery, 444 E. 200 South, 801-364-8284, through May 9, free. Phillips-Gallery.com

The Museum of Nobody
The genesis of The Museum of Nobody was the idea that museums typically define creativity narrowly by how they measure it and who has access to it. The anonymous people behind this pop-up museum, referred to as the Bureau of Nobody, feel strongly that this attitude is far too exclusive and blindly leaves all sorts of incredible work out in the dark. So, for two nights only, The Museum of Nobody will showcase all sorts of heretofore unseen—and in many ways unappreciated—art, with the guiding manifesto that The Museum of Nobody is a “free, public exhibition and performance event that challenges prevailing ideas about worthiness and creativity that dominate art galleries, politics, businesses … the museum features creative work by local school janitors, homemade-kitchen-dark-room photographers, data-visualization computer scientists, grandmother-taught and grandmother-approved sewers, world-renowned painters and more, all side-by-side and anonymous; presented (per our artists’ request) without recognition, without profit, and without heuristic.” Basically, the idea that good art is just that, and it should be able to speak for itself. (Jacob Stringer)
The Museum of Nobody @ SLC Photo Collective, 561 W. 200 South, April 24-25, 6 p.m. with live performances at 9 p.m., free. MuseumOfNobody.com

Plastique: The Wonderful, Horrible Nature of Plastic
Plastic seems to have a life of its own. It’s ubiquitous, part of almost everything we use in the course of a day, and has replaced many natural substances in consumer goods. Yet, for all its familiarity, there is a strange alien nature about it, perhaps because of its permanence. The fact that it doesn’t degrade in landfills makes us feel like it’s mocking that which is subject to forces of nature, death and decay. Yet it still fascinates us, and this duality is the subject of Plastique: The Wonderful, Horrible Nature of Plastic, presented at Urban Arts Gallery by local nonprofit arts organization Brolly Arts. The exhibit makes use of the efforts of artists, community members and community organizations, and installation art will be constructed during outreach projects in addition to individual efforts. Artists include Brolly Arts’ director, Amy MacDonald; nonprofit youth arts group Bad Dog Arts’ directors, Victoria Lyons and Michael Moonbird, and some of their students; poet Joel Long; photographer Cat Palmer; and painters Margaret Willis and Renee Keith—more than two dozen participants in all. Plastic isn’t just a substance; it’s also become a metaphor for many different facets of contemporary life: convenience, flexibility, disposability and also the superficial. Plastique aims to not only create a dialogue, but also increase awareness of the impact of plastic on our lives, and create a project that will be replicated, like plastic itself. (Brian Staker)
Plastique: The Wonderful, Horrible Nature of Plastic @ Urban Arts Gallery, 137 S. Rio Grande St., 801-651-3937, through May 3, free. UtahArts.org

Utah Repertory Theater & Around the Globe Theatre: Grace
The New York Times’ review of a 2012 production of Craig Wright’s Grace—which starred Paul Rudd and Michael Shannon—described the play as “not a whodunit but a why-dunit.” That’s because the play opens without any mystery as to the ultimate fate of four characters: They’re all lying on the ground dead when it opens, and it’s only through a rewinding of the action that we learn how they ended up there. The events focus on an evangelical Christian named Steve, relocated with his wife to Florida as he attempts to launch a chain of Gospel-themed hotels. Among the people he encounters are a NASA scientist and a German immigrant, both of whom have seen enough tragedy that they find it hard to give themselves over to Steve’s fervent belief. But as the doubters begin to shift in their sense of God’s presence, so too does Steve. (Scott Renshaw)
Utah Repertory Theater & Around the Globe Theatre: Grace @ The Sugar Space Studio for the Arts, 616 Wilmington Ave., April 25-May 10, Fridays & Saturdays 7:30 p.m.; 2 p.m. matinees May 3 & 10;  May 4, 6 p.m., $12-$15 in advance, $14-$17 at the door. UtahRep.org

Bengt Washburn
Like many kids raised in Mormon families, comedian and Utah native Bengt Washburn eventually went out into the world and experienced the culture of different countries. But for that demographic, going on a mission (Washburn spent his in Tacoma, Wash.) is far more common than getting married to a woman in the Air Force and winding up based in Germany—where, as Washburn describes it, “I didn’t learn German, but my English-with-a-German-accent is impeccable.” Over the course of a nearly 20-year comedy career—including winning the prestigious San Francisco International Comedy Competition in 2001—Washburn has had plenty of fun at the expense of his Mormon heritage. He describes the rules for being a good Mormon as including “no drinking, no smoking, no premarital sex and, of course, the most logical one, no coffee. Because think about it: No drinking, no smoking, no sex … why stay awake? Why even bother getting out of bed, really?” And more generally: “One person doing something crazy, that’s a nut. A bunch of people doing something crazy, that’s a religion.” Those who saw Washburn during his hilarious headline sets during the 2013 Utah Arts Festival will know that his off-kilter sensibility is wonderfully self-deprecating, often focusing on his own relationships and his failure as an ideal physical specimen. And if you can’t get enough of him from this week’s performance, you can take home his new CD Bengt Over Europe. (Scott Renshaw)
Bengt Washburn @ Wiseguys West Valley, 2194 W. 3500 South, 801-463-2909, April 25 & 26, 7:30 & 9:30 p.m., $12. WiseguysComedy.com

Utah Symphony: Tchaikovsky’s Suite No. 3
There are two ways to view the upcoming Utah Symphony program: 1. It’s about Jesus; 2. It’s about Russia. On the side of the carpenter from Nazareth, you’ve got the fact that two of the three pieces on the program—Nikolai Rimsky-Korsakov’s Easter Overture and Olivier Messiaen’s L’ascension—are about Him, and after all, it is the Easter season. However, Russia can claim that two of the three pieces are by Russian composers—Rimsky-Korsakov and Tchaikovsky—and the guest conductor is Russian Andrey Boreyko. Insert your own Vladimir Putin and Jesus joke here. The headline piece is Suite No. 3 by Tchaikovsky, a composer who tried to combine traditional Russian music with the sounds of the Western European classical tradition. The result left many Russians at the time feeling like their favorite indie band had sold out to make a techno album, but history has vindicated him. Mother Russia or the Son of God. Attend the show and decide who you think should get top billing. (Geoff Griffin)
Utah Symphony: Tchaikovsky’s Suite No. 3 @ Abravanel Hall, 123 W. South Temple, 801-355-2787, April 25-26, 8 p.m., $18-$69. ArtTix.org

Dutch Days at the Tulip Festival
The word nederland literally translates as “low land” and is applicable to the tulip-loving Netherlands because more than 20 percent of the country is below sea level, with a mere 50 percent existing less than 1 meter above sea level. Talk about an entire people threatened by climate change. But the enterprising Dutch have always dealt with such hazards with deft aplomb. See their intricate networks of dikes, innovative floating houses and those iconic windmills as proof. These, among other reasons (like wooden shoes and those killer floppy headdresses) are fine reasons to celebrate all things Dutch. As part of the annual Tulip Festival each spring (featuring mroe than 250,000 flowers consisting of 100 varieties spread out over 55 acres), Thanksgiving Point likes to set a weekend aside to highlight the cultural ways of the Netherlands—like riveting games of sjoelen (Dutch shuffleboard), tasty treats such as stroopwafel and traditional polka music. Just remember that if you come in costume or wearing the color orange—like all good Dutch everywhere—there’s a discount on the entrance fee. (Jacob Stringer)
Dutch Days at the Tulip Festival @ Thanksgiving Point, 3003 North Thanksgiving Way, Lehi, 801-768-2300, April 25-26, 8 a.m.-8 p.m., $12-$15. ThanksgivingPoint.org

Miller Motorsports Park Season Opener & Car Show
Think of just about any type of vehicle with a motor you can imagine, and they’ll be racing it at Miller Motorsports Park in Tooele on Saturday. Whether it’s on the 2.2-mile West Course, the 2.18-mile East Course, the 1.1-mile infield motocross course, the off-road short course or the Miller Kart Track, some sort of car, motorcylce, off-road vehicle or kart will be circling at high speeds. And if you’d rather see cars close up, Utah Car Czar will be hosting a car show on the premises. Best of all, the whole thing is free. For most events involving motor sports, you’re used to TV and radio ads where that gravelly voiced announcer yells, “Kids seats, just five buuuuucks!” In this case, he’ll be bellowing, “Everybody gets in freeeeeeeee!” And there’s not just free admission, but also free hot dogs and drinks and free zip line rides, to boot. The event kicks off the 2014 season for MMS, which will feature many different types of racing throughout the summer and fall. June brings off-road truck racing with the Lucas Oil Off-Road Racing Series. Motorcycle riders show up in July to race on the Miller track for Bike Fest 2014. August will feature the best motocross riders in the world competing in the dirt. September brings the Utah Grand Prix, a weekend that combines NASCAR K&N Pro Series West, a training ground for the NASCAR Spring Cup, as well as Aston Martins, Porches and Corvettes taking laps as part of the Pirelli World Challenge. (Geoff Griffin)
Season Opener & Car Show @ Miller Motorsports Park, 2901 Sheep Lane, Tooele, 435-277-8000, 8 a.m.-5 p.m., free. MillerMotorsportsPark.com