In large-scale, colorful abstract paintings that are contemplative, questioning, even surprising, artist Laura Hope Mason dares the audience to look with a fresh perspective. The paintings are an exciting play of hypnotic color and mesmerizing line, offering glimpses into worlds that are ethereal and often beautifully bizarre. Organic Elements is a series influenced by nature, both at the microscopic and macroscopic levels. Aside from the visual magic that Mason creates, a compelling part of the show is that Mason does not reveal which is which—from an organic painting based on lichen, to an aerial view of lines that naturally map landforms. The difference between the two is hardly distinguishable and, "the pieces evoke the calm and serenity of nature and invite the viewer to examine their own relationship with the environment," Mason says. "Personal sensibilities determine whether extreme magnification or aerial views will be revealed to the viewer." "On the Surface" (pictured) may be an overhead view of the linear tensions in the Great Salt Lake, or it might be ripples formed in a pond in Mason's own backyard. "Traverse" may be the trails left by snails in moss on a misty morning, or it could be a flyover of tailings ponds near the airport. And "Petrified" may be a mapping of the red rocks of Moab, or it might be tracings left by tens of thousands of years in a stump of wood. These paintings are created to give viewers the freedom to determine what they represent. (Ehren Clark) Laura Hope Mason: Organic Elements @ Salt Lake City Main Library, 210 E. 400 South, fourth floor, 801-524-8200, through May 1. SLCPL.org


Just what does it take to mount an art exhibition? It seems like a question reserved for those who undertake those projects, and the rest of us just enjoy and evaluate the results. But Number 04, a local design studio and micropublishing firm, set out to research and catalog this subject the way a reference librarian might. What kind of lighting is optimal? How do you preserve works of fine art from damage while on display? What effects do different typefaces have in marketing brochures? At 1,000 pages, the resulting book continued to be the subject of fresh imagery generated by the project itself. Indeed, so much data was amassed that Actual Source became unfeasible as a physical record of Number 04's work. Instead, these data resulting from the artists' research have been abstracted from their "actual source." The results are presented in the form of works of art in a wide range of media, including graphic design, sculpture and textiles. It's as though the activities involved in putting together an exhibition are not exactly separate from the impulse to create the art itself—but the two recombine, and ideas play themselves out, not unlike in an artist's sketchbook. The opening reception on April 24 will also provide a look at three other new exhibitions: Adjunct, a collection by artists in various stages of their adjunct teaching careers; artist-in-residence Levi Jackson's Bushwhacker; and Missileblower (and the Selected Good) by Brian Charles Patterson. (Brian Staker) Number 04: Actual Source @ Utah Museum of Contemporary Art, 20 S. West Temple, 801-328-4201, April 3-May 16, opening reception April 24, 7-9 p.m. UtahMOCA.org.


Spring Season is upon us—and that doesn't just mean the tulips are blooming. Ririe-Woodbury Dance Company will be bringing two world premieres to the stage for its Spring Season production. The first performance is a one-of-a-kind commission by renowned New York choreographer and 2012 Guggenheim Fellow Netta Yerushalmy. Best known for her provocative and imaginative movements, Yerushalmy creates a performance that is sure to be unlike anything you have seen. Follow that up with world premiere No. 2, 53 Rooms. Choreographed by Ririe-Woodbury Dance Company artistic director Daniel Charon, 53 Rooms is a collaboration with the Salt Lake Electric Ensemble (SLEE), along with guest dancers from the University of Utah. This performance combines contemporary music software with modernized movement, creating imagery that explores both a personal and communal side of dance. (Aimee L. Cook) Ririe-Woodbury Dance Company: Spring Season @ Rose Wagner Center, 138 W. 300 South, 801-355-2787, April 9-11, 7:30 p.m., $20-$35. ArtTix.org


Almost Tango, the title of Ballet West's spring performance, is apropos. While it's the name of one of the featured pieces, it also hints to a link between all three works on the playbill: ballet influenced by other dance forms. It's fairly common for choreographers to find inspiration in other spheres of movement, but within traditional ballet, a little less so. Yet all three ballets on the program do just that. George Balanchine's classic Square Dance uses mostly traditional ballet movement and technique, while feeding off the repetition, form and social atmosphere of square dancing—going so far as to include a traditional caller, a role that will be played by Ballet West's artistic director Adam Sklute. Second on the program is the title piece, re-choreographed for Ballet West by resident choreographer Nicolo Fonte. With its rich cultural roots and passionate style, tango is a favorite dance form from which to pilfer. Like Balanchine, Fonte focuses on the social aspects of the dance by setting his piece in a crowded tango hall (10 male dancers paired with four female ballerinas), as opposed to the fervent push-pull of a more intimate pas de deux. Anchoring the evening is a revival of William Forsythe's In the Middle, Somewhat Elevated. Considered a masterpiece of contemporary ballet, it premiered in 1987 in Paris, and also pulls from other dance forms in a social setting—a dance club featuring a stark score by Thom Willems emulating the harsh sounds of early techno music. (Jacob Stringer) Ballet West: Almost Tango @ Rose Wagner Center, 138 W. 300 South, 801-355-2787, April 10-11, April 15-18, 7:30 p.m.; April 18-19, matinee 2 p.m., $29-$84 ArtTix.org, BalletWest.org 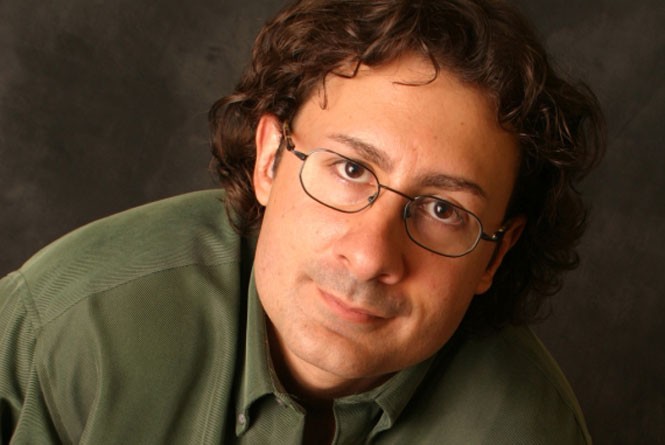 
If the name of this show didn't tip you off, the Friends of the Bob & Tom Show Comedy Tour is comprised of frequently returning standup guests (as well as longtime personalities) on the Indianapolis-based syndicated radio program that you can hear on KBER 101.1 every weekday. Most of them are rising talents, and the two hosts constantly chuckle at their jokes throughout the morning. The tour itself constantly changes its lineup of headliners every week, so any given city might get a completely unique show. For Salt Lake City, we're getting an interesting bunch who have been staples of the show at various points. Costaki Economopoulos (pictured), a 22-year standup veteran, used to be a B&T regular with his weekly "Economonologue" spot. Drew Hastings has starred in several one-man shows, and is one of the few comedians to get a standing ovation on The Tonight Show. Finally, the show features Tim Cavanagh, a parody musician who has made hundreds of songs over his career for various programs and features, and is sure to sing a jingle or two for his part of the evening. The final participant in the show's hilarity is B&T's announcer for nearly 30 years, Chuck McGee, serving as host throughout the festivities. Depending on his mood, you'll either get fantastic jokes between sets or shameless promotion of the show and its merch—so come prepared. One dollar of your ticket purchase will benefit the American Red Cross. (Gavin Sheehan) Friends of the Bob & Tom Show Comedy Tour @ The Depot, 400 W. South Temple, 801-456-2800, April 11, 7 p.m. & 9:30 p.m. $28.50. DepotSLC.com