Momentum 2015, Ralphie May, The Dreamers Project and more 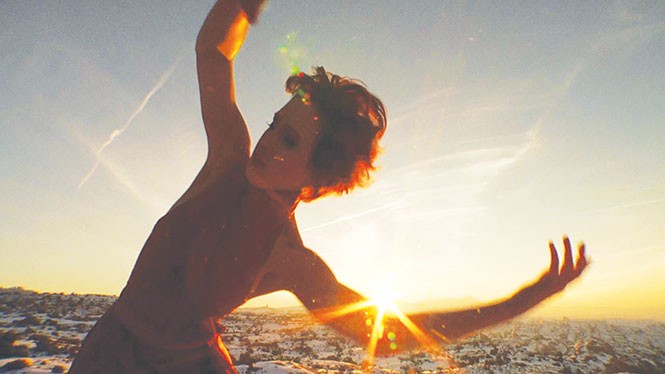 Ririe-Woodbury Dance Co.: Momentum 2015
When former Ririe-Woodbury dancers Juan Carlos Claudio and Jill Voorhees Edwards curated the company's first Momentum performance—an evening of works featuring choreography from company alumni—they thought it would be a one-time deal. Seven years later, it has become an annual favorite.
Part of what keeps Momentum a refreshing addition to the company's regular performance season is the variety of styles and expression presented in a single evening. Without an overarching theme, each choreographer's work stands alone as a unique voice. Returning alumna and Momentum producer Edwards—who, since departing from Ririe-Woodbury, has continued her work in the dance world as a teacher and founder of her own company—says that for the artists, Momentum is an invaluable opportunity to exhibit their personal artistic development in a community that still feels like home. This year, six choreographers show their creations. Four are returning contributors (Claudio, Edwards, Chia-Chi Chiang and Jillian Harris) and two are new (Lehua Estrada and current company member Bradley Beakes). Harris, in particular, takes Momentum 2015 to new creative heights with the mixed-media dance Red Earth Calling (pictured), the first dance film ever to be shown at a Momentum production. Part of an exciting and increasingly popular new wave of dance films, this piece, shot in Moab, tells the visual tale of a young man lost in the desert, slowly enchanted by the spirit of the land. Red Earth Calling is a perfect example of how alumnus works serve as important bridges to the ever-evolving world of dance. (Katherine Pioli) Ririe-Woodbury Dance Co.: Momentum 2015, @ Rose Wagner Center, 138 W. 300 South, 801-353-2787, Aug 27-28, 7:30 p.m., $20 general, $15 students. ArtTix.org

Ralphie May
One of the great stand-up comedians is taking the stage at Wiseguys. Ralphie May was voted one of the Top 10 comics to watch by Variety back in 2008, and his Southern swagger and vulgarity make even the toughest critics laugh out loud. His sold-out shows are enjoyed by audiences everywhere, and no subject is off limits; not many can switch subjects—from Dora the Explorer being a little lost Mexican girl to getting stoned with Jesus ("Who do you know that works construction and doesn't smoke a little weed once in a while?")—and not lose or offend someone in the audience along the way. May's no-nonsense approach to life might have you blushing in your seat while your face hurts from laughing as he points out society's hypocrisies, leaving no sacred cows unscathed. Born in Tennessee and raised in Arkansas, May got his start in the business at age 17 after winning a contest to open for his idol, the late Sam Kinison. With Kinison's encouragement, May went to Houston to develop his comedic routine, and has since taken the comedic world by storm. He has appeared on Comedy Central, NBC's Last Comic Standing and recently released his fourth one-hour special Too Big to Ignore. He also released a new comedy special on Netflix, Ralphie May: Unruly—an adjective that pretty much sums him up. (Aimee L. Cook)
Ralphie May @ Wiseguys Comedy Club, 2194 W. 3500 South, West Valley City, Aug. 27, 7:30 p.m.; Aug. 28-29, 7:30 & 10 p.m.; $25; 21 and over. WiseguysComedy.com

The Rose Exposed: The Dreamers Project
Every year, the performing arts companies that call the Rose Wagner Center home spend 10 hours creating music, dance and theater performances, all of which share a common theme or concept. When their 10 hours is up, they unleash their collective talents upon Salt Lake City for an evening of singular entertainment. Starting at 9 a.m., Plan-B Theatre, SB Dance, Gina Bachauer International Piano Foundation, Ririe-Woodbury Dance Co., Pygmalion Theatre Co. and Repertory Dance Theatre will each create pieces they will perform for audiences at 8 p.m. Before the evening show, attendees are welcome to visit the Rose Wagner Center to see live rehearsals of their favorite local performing-arts groups. The idea for this year's theme was inspired by an upcoming project by Art Access, a local organization that is dedicated to providing inclusive opportunities for people to create and interact with art. The Dreamers Project is a series of artistic endeavors that will delve into the stories of immigrant culture in order to help people better understand its complexity. All of the proceeds from the evening show go directly to Art Access and the Dreamers Project. As the evening's performances are developed over the course of this single day, attendees can expect six one-night-only shows that run the gamut of performing arts. The Rose Exposed offers a unique opportunity for fans of these creative companies to see what goes into creating a performance from start to finish. (Alex Springer) Rose Exposed: The Dreamers Project @ Rose Wagner Center, 138 W. 300 South, 801-355-2787, Aug. 29, open daytime rehearsals, 9 a.m.-6 p.m., free; evening show, 8 p.m., $15, ArtTix.org

Latin Ballroom Lessons With Chelsie Hightower
So you think you can't dance? Or, more to the point, you know you can't? Wouldn't it be great to pick up a few pointers from someone who has taken her skills to the national stage, and find yourself with a few Latin dance moves in your back pocket for special occasions—or for making every occasion a little more special? Utah's own Chelsie Hightower—an alum of both Dancing With the Stars and So You Think You Can Dance? as performer and choreographer—stops in for a visit this weekend at DF Dance Studio, where she will lead a two-hour program of special lessons. Beginners are welcome for the first hour, which will focus on the rumba (a style recommended for beginning dancers), while experience is recommended for refining technique on the cha-cha during the second hour. No partner is needed for the classes; simply bring your willingness to believe that, with a pro showing you how, you can dance. (Scott Renshaw) Latin Ballroom Lessons With Chelsie Hightower @ DF Dance Studio, 2978 S. State, 801-466-0490, Aug. 29, 12-2 p.m., $35 advance/$40 door. DFDanceStudio.com

Christine Seifert: Whoppers: History's Most Outrageous Lies and Liars
We all hate to be lied to. Yet we're also fascinated by what happens when other people are lied to. And in Christine Seifert's lively new book Whoppers, she explores the stories of some of the most intriguing con artists, frauds, charlatans, hucksters and pretenders who have ever pulled the wool over unsuspecting eyes. Many of the names and tales here are likely to be familiar, from the subjects of movies (Catch Me If You Can's Frank Abagnale Jr.; Quiz Show's Charles Van Doren) to those whose deceptions made 21st-century national news (like cyclist Lance Armstrong, Oprah-chided memoirist James Frey or Ponzi schemer Bernie Madoff). But Seifert also finds lesser-known stories of people whose deceptions were more admirable, like 19th-century abolitionist Mattie Griffith, who wrote a faked Autobiography of a Female Slave to raise money for re-settling her own family's freed slaves, or Deborah Sampson, who posed as a man in order to fight with the infantry in the American Revolutionary War. From forged photos of monsters and fairies to YouTube-era tricks to a successful attempt to sell someone the Eiffel Tower, Seifert provides an encyclopedia of tall tales and their tellers. Yet she also attempts to understand both what motivated these frauds and why people were willing and able to believe them. Sprinkled with fun bits of trivia, Whoppers makes brisk reading out of the many reasons we practice to deceive. And that's the truth. (Scott Renshaw) Christine Seifert: Whoppers: History's Most Outrageous Lies and Liars @ The King's English Bookshop, 1511 S. 1500 East, 801-484-9100, Sept. 1, 7 p.m., free. KingsEnglish.com