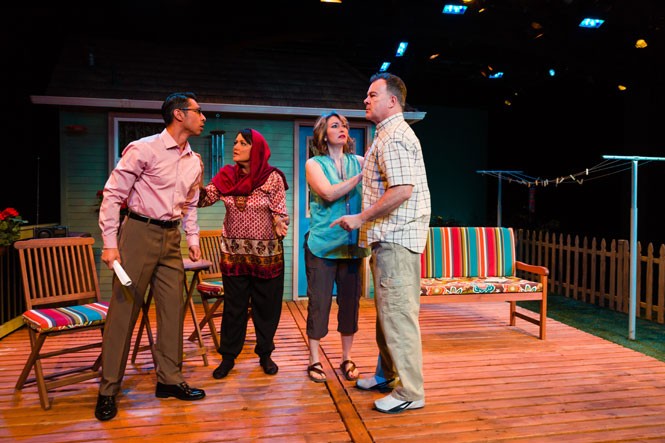 
Elaine Jarvik's new play Two Stories initially appears to be about a cloistered white journalist who has a "learning" moment when a Pakistani family moves in next door. Yet, by the end, that notion seems quite clearly to be what the play itself is critiquing. The clues to this shift build gradually and subtly. For one, it eventually becomes obvious that, while the protagonist, Jodi, is a journalist fearing for her job against the dual blade of capitalistic ruthlessness and ageism, she's also a little shaky ethically. The broad manner in which the new neighbors are staged as characters eventually reads as a reflection of how Jodi sees them—as The Other—rather than as they are. And so what looks like yet another story of privileged (if temporarily disadvantaged) white people colliding with the lives of nonwhite people ends up becoming a damning and elegantly turned satire on that very dynamic. This clicks into place late in the play when (milder spoiler than it appears) Jodi's husband Kevin is accused of a hate crime, and is in utter disbelief that he has been accused, when the script and staging explicitly show him committing a hate crime. In the end, Two Stories is a provocative and multivalent work that looks at the failure of good intentions to overcome hardwired cultural condescension and is a typically fine and well-mounted piece of stagecraft from Salt Lake Acting Company. (Review of design elements is unfortunately not possible due to technical difficulties on the night of this review) (Danny Bowes) Two Stories @ Salt Lake Acting Company, 168 W. 500 North, 801-363-7522, through March 1, $24-$38. SaltLakeActingCompany.org 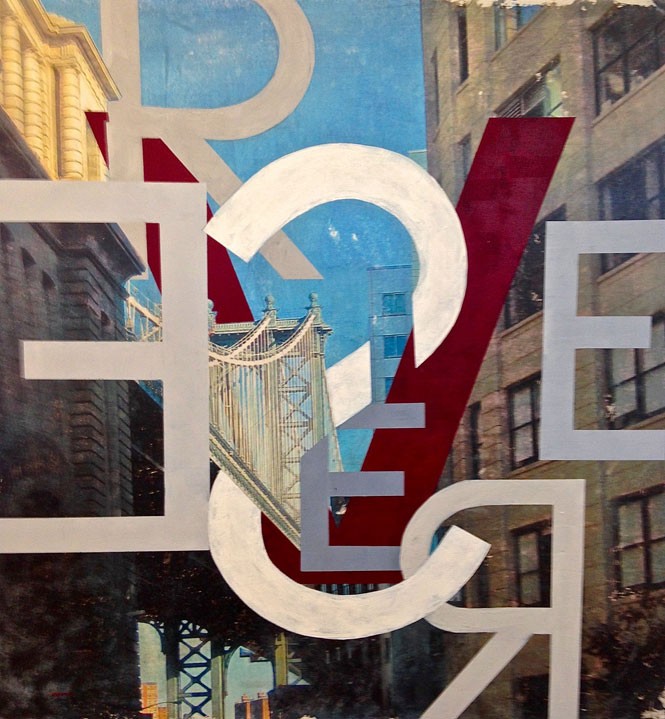 Don't Read This
From birth, a child comes to understand the world through sensory experience. Only later does the written word become learned and an automatic function for making meaning. But art can teach us new ways of seeing, and artists often use the universality of words not only to create specific meaning, but for other purposes as well. In Don't Read This, a new show at The Gallery at Library Square, the conventional usage of the word is deconstructed, as artists use the word as an artistic tool. "As an artist, if I use text, I don't use it for the meaning of the word; I use it for an aesthetic purpose," says artist Justin Wheatley. "In this show, it comes down to the aesthetic use of it, and not the words themselves. We find beauty and utility." "Words from Brandon Sanderson," a large canvas by Randall Marsh, contains a massive amount of minuscule text, written in cursive in exacting, straight lines. Yet, a viewer might not even attempt to focus on the meanings of this text but rather enjoy the simplicity of flow, precision and repetition of line, and the dimension added by the minute loops, swirls and hoops of the cursive. Wheatley's contribution to the show is "Reverse" (pictured). It, too, is a large canvas, and employs large letters as structural elements, just as much as it employs a cable bridge, buildings and sky. "When you draw from literature, you don't focus on the words, you focus on the meaning as a whole," Wheatley says—and in "Reverse," he has achieved an astonishing sense of balance. (Ehren Clark) Don't Read This @ The Gallery at Library Square, Salt Lake City Main Library, 210 E. 400 South, 801-524-8200, through March 13, free. SLCPL.org


Black History Month is often an opportunity to explore figures of scientific or social significance in American history, from George Washington Carver to Martin Luther King Jr. But it's also a chance to discover work by extraordinary African-American artists, like the great poet Langston Hughes. The Langston Hughes Project brings to Kingsbury Hall the poet's epic work Ask Your Mama: Twelve Moods for Jazz. Intended to be scored to musical cues featuring Dixieland, calypso, bebop and many more styles with African or Afro-Caribbean origin, the work was never performed in a completed form before Hughes died in 1967. This performance features a live reading by actor Malcolm Jamal-Warner (The Cosby Show), accompanied by the Ron McCurdy Quartet, plus video and still images to provide historical and contemporary context for Hughes' words. It's a chance to learn that may just feed your soul. (Scott Renshaw) The Langston Hughes Project @ Kingsbury Hall, 1395 E. Presidents Circle, 801-581-7100, Feb. 12, 7:30 p.m., $29.50-$49.50, $10 general, $5 students, KingTix.org


In the age of surveillance and the erosion of privacy, the fear of being watched—whether by "Big Brother" or some anonymous stalker in either the real or virtual world—is seemingly the new mythology. The group exhibition Panopticon (from the Greek, for "all-seeing," based on an 18th-century building designed to enable one sentry to watch all chambers) looks at observational systems—"panoptic" systems both physical and invisible—and the works delve into themes of data collection, surveillance and voyeurism. The technological and political implications investigated by these new media works impinge on contemporary questions of meaning and representation. The subtitle of the exhibition—Visibility, Data and the Monitoring Gaze—implies that fascinating things can happen when the viewer becomes the viewed or, at least, is forced to confront the sense of becoming the object of observation. As curator Rebecca Maksym notes: "How do notions of surveillance change when flesh becomes data?" We are rendered as mere information and somehow less than human, the voyeuristic objects of desire and, what's more, subjects of control—and it's discomfiting. Artists in the exhibition include Shin Seung Back and Kim Yong Hun, Erik Brunvand, Mahwish Chishty, Paolo Cirio, Heather Dewey-Hagborg (her "Invisible" is pictured), Willie Doherty, Constant Dullaart, Pablo Garcia, Adam Harvey, Leopold Kessler, Jonas Lund, Kate McQuillen, Trevor Paglen, Evan Roth and Addie Wagenknecht. Utah Museum of Contemporary Art's exhibition Church vs. State, as well as showings from Pam Bowman, Sophie Calle, Jonathan Frioux and new animated graphics from French group The Daily Task, will also open the same evening. (Brian Staker) Panopticon: Visibility, Data and the Monitoring Gaze @ Utah Museum of Contemporary Art, 20 S. West Temple, 801-328-4201, Feb. 13-July 25; opening reception Feb. 13, 6-9 p.m., free. UtahMOCA.org 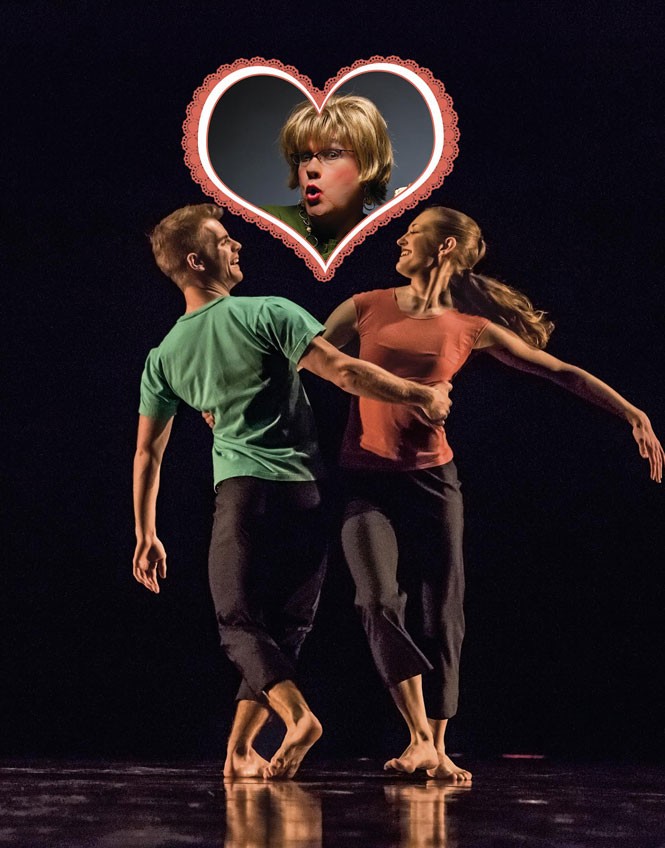 
Repertory Dance Theatre's annual Charette is a fundraiser designed to bring four choreographers into a performance space with an inquisitive audience. Each choreographer is provided with a cast of dancers, a secret ingredient (which could actually be you, if you bid enough money) and just one hour to deliver the finished goods, all in attempt to crown an "Iron Choreographer." This year, Sister Dottie S. Dixon will once again emcee and help local public figures like Fox 13's Hope Woodside and District Attorney Sim Gill navigate the judging for Charette: All You Need Is Love. In years past, the reigning champion clearly had an advantage, knowing how to play the game upon their return to the arena. Nathan Shaw, Iron Choreographer winner for 2013 and 2014, fills that role. But unlike other Charettes, this one is stacked with favorites, including three other prior Iron Choreographers: Amanda Sowerby, Meghan Durham-Wall and Nicholas Cendese. In fact, Cendese—a dancer with RDT for 11 years who now serves as an artistic associate with the company—may have an unfair advantage, as he was the actual creator of the event more than a decade ago. But as Shaw himself notes, and everyone involved with this merry fundraiser makes absolutely clear, it's all about the fun. "Keep it funny," he says. "People do not want angst-ridden modern dance. They want to be entertained. The crowd imbibes all night long. Don't kill their buzz." With this year's competition taking place on Valentine's Day, it probably wouldn't hurt to add a little romance to the mix, either. (Jacob Stringer) Repertory Dance Theatre: Charette @ Rose Wagner Center, 138 W. 300 South, 801-355-2787, Feb. 14, 7:30 p.m., $40, VIP $85. RDTUtah.org, ArtTix.org