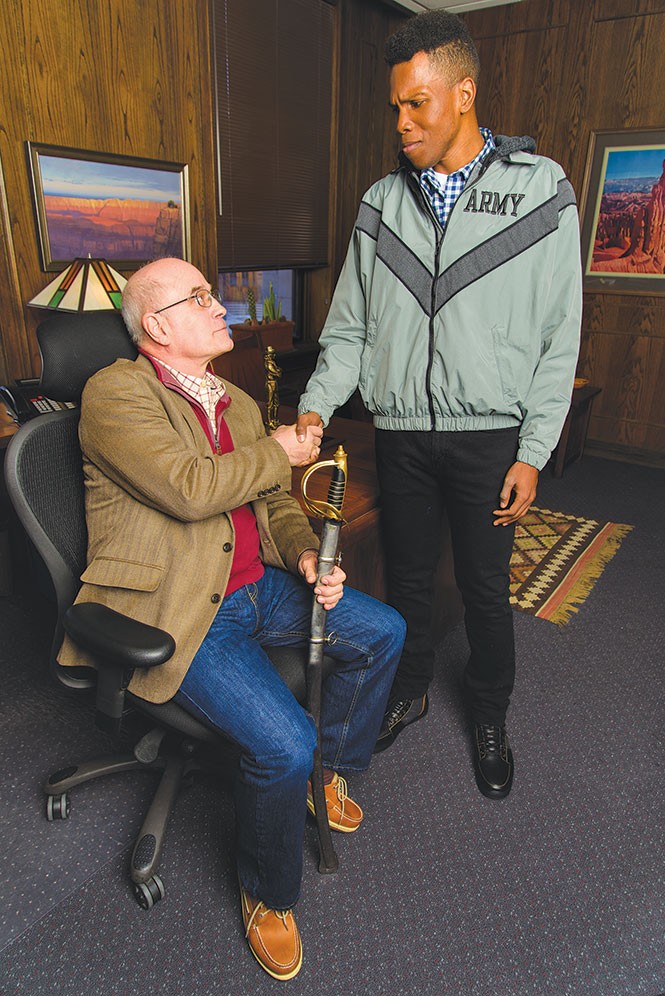 History professor Bill Dudley (Mark Zimmerman) has a special $2 bill he uses as a bookmark—something his father suspected might become worth a lot of money, but is really just a piece of paper that only has as much value as we collectively agree it has. And that becomes a potent metaphor in T.J. Brady's world-premiere play, because Dudley has a secret: He never completed his undergraduate degree.

The fallout from that secret coming to light drives the action, and Dudley's interactions with the play's three other principal characters: his wife, Jessica (Lesley Fera), who is also the university's dean of faculty; Ron (Corey Allen), Dudley's West Point-educated graduate teaching assistant, and Megan (Ephie Aardema), a high-achieving undergraduate. Brady's text becomes a fascinating exploration into what it is we claim to value when we talk about education, as well as how we integrate personal integrity with the things we claim as achievements.

Matt August's crisp direction keeps the action focused on the performances—Fera and Allen are particularly strong—while framing the stage in flags and using military trumpets as a recurring motif. That subtext makes Two Dollar Bill even richer, as Dudley's academic emphasis on military history and Ron's own experience as a decorated soldier collide in the play's ongoing examination of how anyone claims the necessary experience to speak as an authority. The result is something as satisfying as it is provocative; it makes you think about what it means to be a thinker. (Scott Renshaw)

In his New York Times obituary, artist Alwin Nikolais (1910-1993) was remembered as a "pioneer of modern dance." During his lifetime he was called, more colorfully, the "P.T. Barnum" or "Yellow Submarine" of dance. But the man preferred to call himself an "artistic polygamist." Though his foundational medium was dance, and he studied under modern greats like Martha Graham, Nikolais touched every aspect of performance when developing his works—from the movement to props, sets, sound, color and lighting. This week, Ririe-Woodbury Dance Co. presents Illusions, an evening of work by Nikolais.

The Ririe-Woodbury/Nikolais connection is strong, and those familiar with the company's past performances will certainly recognize the choreographer's name. That's because in 1999, Ririe-Woodbury had the good fortune—after the dissolution of the choreographer's own two New York companies—of becoming the "keeper of the flame" for the Nikolais' repertoire. Since then, Ririe-Woodbury has produced Nikolais' pieces locally, nationally and internationally, but this will be a rare evening fully devoted to some of the choreographer's greatest works, including Tensile Involvement (1987), Mechanical Organ (1981), Gallery (1978) and Crucible (1985). There will also be a shortened, family-friendly matinee performance.

Broadway Across America: The Producers

Mel Brooks is one of those creative talents who pushes the boundaries of art. For more than 60 years, he has shown a willingness to step up to the edge of offensiveness—from Young Frankenstein to Blazing Saddles—and make people laugh while doing it. From the big screen to the stage, his Tony-award-winning musical The Producers is making a stop at Capitol Theatre this week.

In keeping with classic Brooks productions centered largely on sarcasm and ridiculousness, The Producers is based on Brooks' 1967 film of the same name, for which Brooks won a Best Original Screenplay Oscar. Brooks wrote the music and lyrics, and Tony-Award winner Susan Stroman choreographed the musical.

The hilarious story follows has-been Broadway producer Max Bialystock (played in this touring production by David Johnson) and his reserved, anxious accountant, Leo Bloom (Richard Lafleur), as they set out to create the worst musical in history in an effort to get rich quick. The duo receives a script from an ex-Nazi about the rise of Hitler's power, as told through song and dance.

Scenes like "Springtime for Hitler" and "Keep It Gay" will have you laughing out loud, and maybe even singing along, as the musical numbers are infectious. The dance numbers are fantastically choreographed, and they use props ranging from small tanks to bratwurst. It's impossible to keep a straight face during The Producers, and the off-color humor is sure to offend all types of folks. (Aimee O'Brien)

An Evening With Melissa Block

NPR's Melissa Block is one of the longest-running journalists for the nonprofit media organization, spanning three decades, and she's coming to Salt Lake City for a live appearance to share her insights and observations.

Starting at NPR in 1985 as an editorial assistant on the flagship news program, All Things Considered, she eventually was promoted to senior producer. Reporting from the Kosovo conflict in 1999, she was lauded with an Overseas Press Club Award. While she was a correspondent in New York City, she reported on the days after the terrorist attacks on Sept. 11. Her coverage of the event helped NPR garner a Peabody Award. In 2008, Block was on assignment in Chengdu, China, when a major earthquake struck, and her work there earned several awards, including the Society of Professional Journalists' Sigma Delta Chi Award. She co-hosted ATC from 2003 through August 2015, after which she became a special correspondent for NPR. Her appearance here should be an extraordinary experience for NPR listeners, or anyone who's a fan of good journalism.

Block has been on the scene for a number of momentous historical events, and she has added a unique, in-depth perspective to NPR's coverage, pursuing long-form reporting that's becoming rare in these days of budget cuts to news organizations. Hosted by KUER 90.1 FM's Doug Fabrizio, the 90-minute program will include a question-and-answer session with the audience. (Brian Staker)

"The Big Tiny": A Drawing by Tony Smith

Local artist and University of Utah faculty member Tony Smith—not to be confused with the late internationally renowned sculptor—has produced "The Big Tiny," a pen-and-markers drawing that took an entire year to create. But in addition to including the work itself, the exhibit of the poster-size drawing at the Gallery at Library Square includes documentation on its own genesis. In addition to notes on the work, questions are raised, like, "Is it art?" or "How much is it worth?" (spelled out in oddly assembled found objects). You can even vote on your assessment of the work, on a ballot ranging from "achingly poignant" to "NOT IN MY HOUSE" to "hard to read, confusing mess."

"The Big Tiny" is an artwork simultaneously about its own creation and the entire world; the title certainly fits. The obsessively detailed accumulation of people and objects teeming under the artist's eye is like a madcap art professor's answer to Where's Waldo? (Brian Staker)