Any collection of works by a single artist aims for some kind of unity, but Sean Morello's Constellations & Supersymmetries—currently on exhibit at the Utah Museum of Contemporary Art—manages to reference art history and particle physics in an idiosyncratic manner. Curated by Adam Bateman, executive director of CUAC Gallery, these pieces emanate a postmodern style referencing art history in subtle ways, using refuse and other found materials to forge a syntax of prototypical mark-making that also comments pointedly about the detritus of modern society. Collages bristle with color and form that speaks of Morello's education at Brigham Young University and Pratt Institute as a painter. The Constellations series of collages consist of snapshots of discarded materials ["4.10.2013 (Actual Size)" is pictured]. Interestingly, the materials for each work were gathered at the same place and time; it's almost like viewing specimens from an archeological dig, but the history of a past that's barely distant at all, and has implications for the future. He draws our attention to items as near as under our feet but as fragmented as star clusters. The Supersymmetries group is based on a scientific theory that arose to augment the standard model of particle physics, modifying that model to allow the existence of phenomena like dark matter. Morello uses this description as a metaphor for the way his assemblages impose order or meaning on the disorders of capitalism, mass consumption and waste in the modern world. His artful depiction of an artless world is nothing less than uncanny. (Brian Staker) Sean Morello: Constellations & Supersymmetries @ Utah Museum of Contemporary Art, 20 S. West Temple, 801-328-4201, through Aug. 1, free (suggested $5 donation). UtahMOCA.com 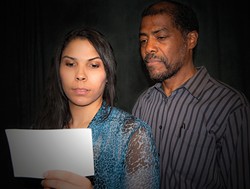 
It's not often that you find a theatrical production as comfortable with silence as Sunset Baby—yet that's one of the most compelling things going on in People Productions' regional premiere of Dominique Morisseau's play. While it digs into social issues like the ripple effects of fatherlessness and the individual costs of trying to change the world, the production finds remarkable grace notes in Richard Scharine's direction of people alone with their thoughts. That might not be intuitively obvious from the set-up, or from the conflict introduced at the outset. Kenyatta Shakur (William Ferrer), a radical social-justice activist recently released from prison, has tracked down Nina (Michaela Johansen), the daughter he hasn't seen in 20 years. He's interested in getting his hands on letters written to him by Nina's now-deceased mother, but Nina—who makes her living selling drugs with her boyfriend, Damon (Calbert Beck IV)—isn't feeling particularly charitable towards him. The confrontations between Kenyatta and Nina don't always produce the kind of fireworks they seem designed for, and it's even harder that they lack Beck, the standout member of the cast. But the text does dig into some thorny questions of relationships splintered by economics, and an emotional distance that can feel like self-preservation. Better still are the scenes in which Johansen's Nina conveys an ease in solitude that she never seems capable of when she's around another person. Often with little more than a Nina Simone song on in the background, Sunset Baby finds power in how easy it is to get comfortable being alone. (Scott Renshaw) People Productions: Sunset Baby @ Sugar Space Arts Warehouse, 132 S. 800 West, July 16-18, 7:30 p.m.; July 18-19, 3 p.m., $15. PeopleProductions.org

When Walt Disney conceived of Fantasia in 1938—a feature-length expansion of an idea that was originally intended simply as a "Silly Symphony" starring Mickey Mouse, accompanied by Paul Dukas' tone poem The Sorcerer's Apprentice—it was a risky attempt to meld the worlds of classical music and animation. And while the initial release of the film was a financial failure, in part due to the expanding war in Europe, it remains a unique part of film history. Fantasia also provides a unique opportunity for a symphony orchestra to invite a younger audience into an art form often assumed to be for old folks. As part of its annual Deer Valley summer concert series, the Utah Symphony presents a program of great works that were featured in both Disney's original Fantasia and the updated Fantasia 2000 theatrical re-release, with the live orchestra accompanying the on-screen animation. That program—which leads off with well-known movements from Ludvig van Beethoven's 5th and 6th symphonies—of course, includes Paul Dukas' The Sorcerer's Apprentice and its celebrated Mickey Mouse sequence full of marching mops; it's hard to imagine Fantasia without it. Selections will also include Amilcare Ponchielli's Dance of the Hours, Pyotr IlyichTchaikovsky's Nutcracker, Igor Stravinsky's Firebird Suite, Ottorino Respighi's Pines of Rome and Edward Elgar's Pomp and Circumstance. And as a special treat for Disney fans, there's the segment set to Claude Debussy's Clair de Lune that was cut from the original 1940 program for length. Guest conductor Richard Kaufman steps in for Fantasia's Leopold Stokowski. (Scott Renshaw) Utah Symphony: Disney's Fantasia Live in Concert @ Deer Valley Snow Park Amphitheater, 2250 Deer Valley Drive, Park City, 801-355-2787, July 17, 7:30 p.m., $10-$72. ArtTix.org

Five years in, the downtown Peruvian Festival is still going strong. Organized by the Utah Latino Arts Foundation, the Peruvian Festival is a unique opportunity for locals to experience the vibrant energy of Salt Lake City's Peruvian community. The two-day festival is packed with opportunities for adults and children to enjoy and learn more about this unique culture. Both days will feature live music, local art, cultural dancing and—perhaps most enticing of all—the Peruvian Gastronomic Fair. Those who have had the opportunity to visit local Peruvian eateries know that Peruvian cuisine is not to be missed. Authentic Peruvian chefs will be on hand to oblige those who have yet to try some refreshing ceviche or comforting lomo saltado. Between the lively performances and the soulful food, the downtown Peruvian Festival is a great, family-friendly way to experience something new. (Alex Springer) Peruvian Festival @ Salt Lake City Main Library Plaza, 210 E. 400 South, July 17, 4-9 p.m., July 18, 10 a.m.-11 p.m., $3. LatinoArtsFoundation.org

If there's one thing Utah does well, it's giving birth to counterintuitive underground scenes, like the punk scene immortalized in the movie SLC Punk. Another great counterculture scene alive and well today is the alternative press scene: comics, zines and other book arts all produced by creative, independent folks right here in the land of white bread and Jell-O. The Salt Lake City Main Library has long been a friend and ally of independent press artists. In 1997, the library started the first zine collection in the country—the collection now resides on the second floor—and, seven years ago, it started the Alt Press Festival, a place where artists and word-crafters share their voice, network with each other and inspire new creators. Since the start of Salt Lake's Alt Press Fest, employees at the city library have noticed a significant increase in the number of locally produced zines in their collection. This summer's seventh annual Alt Press Fest includes the work of more than a dozen local artists, such as Bonnie Kaye Varga Cooper, a former librarian and current paper-crafts wizard, who will be inviting passers-by to write poetry on her collection of typewriters and handing out homemade starter kits for the zine-curious. Larger collaborative writing projects will be present with works from Same Coin Press, Saltgrass Printmakers, the poetry journal Sugar House Review, and the new eco-literary journal Saltfront. Visitors to the free festival can also partake in various workshops and hands-on activities. Don't miss seeing the steamroller printmaking in action. (Katherine Pioli) Alt Press Fest @ Salt Lake City Main Library, 210 E. 400 South, 801-524-8200, July 18, 10 a.m.-6 p.m., free. SCLPL.org/AltPressFest