The fair-weather season of the year is time for plein-air painting to come to the forefront in local art exhibitions, although a mild winter can be conducive to it as well. Far from being an invitation to nature-based kitsch" plein air shows that skilled practitioners of painting nature in nature can create a communion that brings viewers closer to both art and nature. Slusser Gallery's isn't just your run-of-the-mill plein-air exhibition. One of the local masters of the small canvas, Randall Lake, offers work like "Entering Fountain Green" (pictured), a delightful cavalcade of color. The subject matter of Rita Pacheco's "Mint Green Ride"—a Volkswagen bus on a California street—offers the visual equivalent of a thirst-quenching beverage on a hot day. Anastasia Dukhanina's "Late Spring" shows just how late spring can be in a snowy mountain region. These paintings are seemingly as different from each other as any paintings could be within the same broad category. Plain-air painting is somewhat like cinema verite: artists exposed to the elements, recording what they see on the fly, but with an almost athletic competition thrown in. The most surprising thing is the stylistic and compositional versatility possible within the genre. It's ultimately not an attempt at literal accuracy of representation, but to convey a sense of the surroundings—to put the viewer in the picture, too. (Brian Staker) Plein Air Exhibition @ Slusser Gallery, 447 E. 100 South, 801-532-1956, through Aug. 2. MarkSlusser.com. 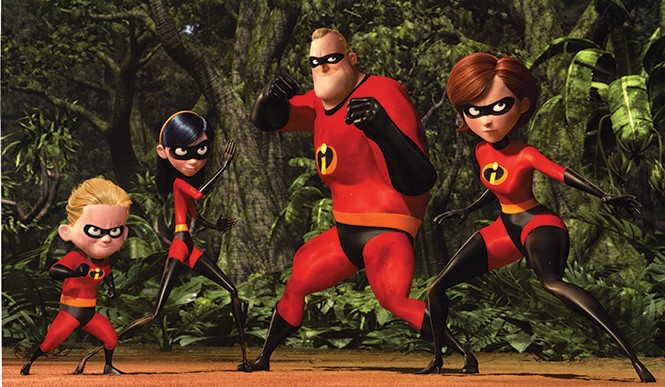 This year, libraries nationwide have adopted a superhero theme for their summer reading programs, inviting kids into the world of books through now-ubiquitous costumed pop-culture characters. Since summer is also the season for enjoying outdoor movie screenings, the Salt Lake City Main Library has taken advantage of this theme to showcase some family-friendly heroic adventures. The free monthly Super Summer Cinema Series launches this week with The Incredibles (pictured), the 2004 Disney/Pixar favorite about a super-powered family united against a dangerous villain. In July, it's the 1991 adaptation of the comic-book series The Rocketeer, with Billy Campbell as the 1930s stunt pilot who winds up with an experimental jet pack. And in August, last year's hit Marvel Studios film Guardians of the Galaxy brings a rag-tag collection of mercenaries and outlaws together to become unlikely heroes. Bring a blanket and snacks, and don't worry about weather—if conditions require it, screenings will move indoors to the library auditorium. (Scott Renshaw) Super Summer Cinema Series: The Incredibles @ Library Square east lawn, 210 E. 400 South, 801-524-8200, June 11, dusk (approx. 9 p.m.), free. SLCPL.org

The annual Ogden Arts Festival marks the official kick off of summer in the Ogden area, and it's happening this weekend. Festivalgoers will enjoy the new venue at Ogden Municipal Gardens & Amphitheater this year, as it allows for more time to enjoy all the festivities while strolling around a larger area filled with art and many juried artists booths. The Ogden Arts Festival produces an artistic environment that can be enjoyed by all ages. Take in the free "kids' ARTivities" provided by local nonprofit organizations like the Treehouse Museum as well as the eclectic musical lineup, where you can listen to some of the best local bands while you lounge on the lawn. Food vendors will make sure you don't go hungry as you peruse the arts and entertainment. A special performance by Holy Water Buffalo and Municipal Ballet Company will take place on stage on Friday night. Classified as a rock & roll ballet performance, it is sure to be mesmerizing and full of energy. Sometime throughout the festival, make your way over to the "Nurture the Creative Mind" (NCM) zone where you can get your own creative juices flowing by throwing paint, building crafts or simply coloring. You may discover a talent you didn't know you had. (Aimee L. Cook) Ogden Arts Festival @ Ogden Municipal Gardens & Amphitheater, 343 25th St., Ogden, June 12-13, noon-8 p.m. OgdenArtsFestival.com.

Back in 1977, Utah culture was enriched by a sharp influx of Southeast Asian refugees from Vietnam, Cambodia, Laos and the Hmong. According to JoAnn Wong, marketing and publicity director for the annual Utah Asian Festival, in order to build a bridge between these newly arrived minority groups and Utahns, the already-established Chinese, Japanese, Korean and Filipino communities pooled their resources for the very first multicultural festival in the state. Now in its 38th year, the Utah Asian Festival highlights food, performing arts and merchandise from all those cultures and more—like Thai, Indonesian, Tibetan, Taiwanese, Pacific Islander and Indian groups. Think tons of origami, kite-making for the kids, folk arts and dance troupes, and enough ethnic cuisine to keep you stuffed. In more recent years, fundraising for specific aid groups has also become a part of the festival. In 2011, Japanese groups collected money to help victims of the Thoku tsunami. This year, the Bhutanese community will join the festival fun for the first time, not only to emphasize its beautiful culture but also to help provide awareness about the devastation in Nepal after the two recent earthquakes. There will also be a Nepalese dance group showcasing traditional dance forms of the region in the morning on the main stage. Not limited to celebrating all things culturally traditional, the final part of the festival will include the Asia Pop Dance Party & Parade, with live music provided by DJ Jpan and DJ Luva Luva. Cosplay and fun dress are highly encouraged. (Jacob Stringer) Utah Asian Festival @ South Towne Expo Center, 9575 S. State, June 13, 10 a.m.-7 p.m., free. Facebook.com/UtahAsianFestival

Dan Wells: The Devil's Only Friend

In 2010, Utah author Dan Wells introduced John Wayne Cleaver, a teenage sociopath who became the improbable hero in a trilogy of novels—I Am Not a Serial Killer, Mr. Monster and I Don't Want to Kill You—that pitted him and his skill of profiling serial killer behavior against the terrifying threat of ancient, deadly supernatural creatures known as "the Withered." Wells returns to Cleaver's story in The Devil's Only Friend, in which the war between humans and the Withered has escalated—and may now involve a civil war between the Withered themselves. Now part of an FBI team dedicated to hunting down and destroying the Withered, John is concerned when it appears that multiple Withered are living in the same small town. Have they figured out who is targeting them, and decided to join forces to go on the offensive? Or are they congregating in part to choose sides in a massive power struggle? With the developments that changed John's life in I Don't Want to Kill You, the focus has shifted from the tension between John's awareness of his own potential for violence and the family normalcy he tries to maintain. But Wells digs deeper into the mythology of the Withered, while complicating the question of what makes someone a hero or a monster. The result is yet another terrific mix of whodunnit puzzle and shivery horror yarn, built around one of the most fascinating anti-heroes in contemporary fiction. (Scott Renshaw) Dan Wells: The Devil's Only Friend @ Weller Book Works, 607 Trolley Square, 801-328-2586, June 16, 6 p.m. Free; @ Barnes & Noble, 330 E. 1300 South, Orem, 801-229-1611, June 17, 6 p.m., Free.