Salt Lake City has the distinction of being the gayest city in America, according to the national gay and lesbian news magazine The Advocate. That may surprise some who live here, but for anyone who has watched the Utah Pride Festival grow from a small gathering in a park in 1974, to a relatively well-attended parade down State Street, to the massive four-day celebration that it is today, it's obvious that Salt Lake City is out, loud and proud. This year, there's plenty to celebrate at Pride Fest. Utah's gay community has seen blockbuster achievements, from a court ruling striking down the ban on gay marriage to an anti-discrimination bill passed by the Legislature. Reflecting these great changes is the open-ended theme of the 2015 festival: Pride is ____. "With all that has happened in the last year," says Jen Parsons-Soran, co-director for the festival, "we know that Pride means many things to many people." It certainly means a great party. Kicking things off on June 4 is thesixth annual Miss City Weekly Pride Pageant, a showcase of Utah's most beautiful and outrageous drag queens. On Friday, participants can take their voices to the streets with rallies and marches following the grand marshal reception. Saturday and Sunday feature performances by comedians, musicians (including singer Dev and the band Xelle), dancers and more. And be sure to join in Sunday morning's pride parade at 10 a.m. The route begins at the corner of 400 East and 200 South and continues west on 200 South, to the Salt Palace, where it ends. (Katherine Pioli) Utah Pride Festival 2015 @ Washington & Library squares, 451 S. State, June 4-7, 9 a.m.-11 p.m., $20 full-festival pass, $12 single-day pass, $50 grand marshal reception. UtahPrideFestival.org 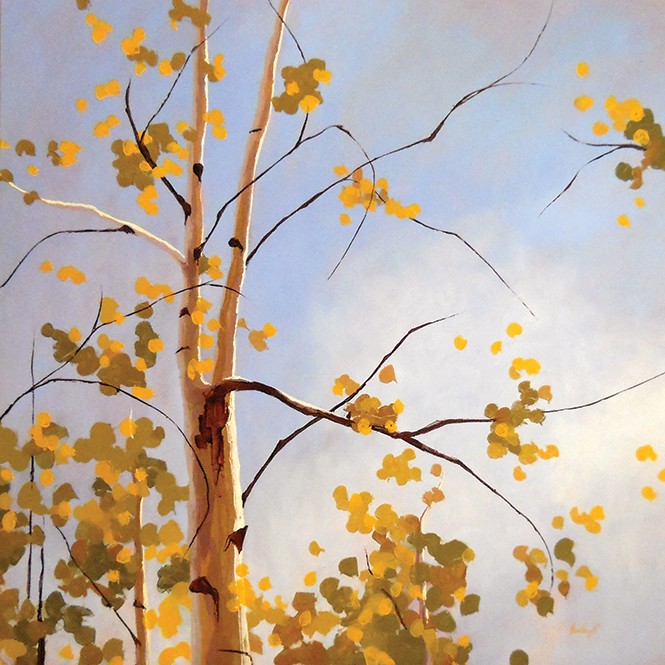 Phillips Gallery is a can't-miss on the Gallery Stroll circuit, but if you somehow didn't make it to the May opening, the gallery's current offerings remain on display until June 12. The pairing of sculptures by Francesc Burgos with Hadley Rampton's oil paintings is certainly a harbinger of springtime, with the fresh, inviting manner in which both artists present their subject matter. Burgos' sculptures like "Quill" and "Bounty" unroll their designs and shapes toward the viewer in a simple, organic motion, often mimicking the forms of natural structures, their articulated repeating motifs like veins of a leaf; the porcelain of those pieces lends itself to a clean, yet earthy, manifestation. The stoneware "Tall Vessel (Tectonic)" would even, in title as well as form, remind us of the shifting plates of the Earth itself. Yet several of Burgos' earthenware pieces, like "Derrida," emphasize the constricting nature of society in the midst of nature, including the mask that is language. Hadley Rampton's landscape oils often portray autumnal scenes, but there is a clarity and precision, as well as an expert use of light, that is as refreshing and exhilarating as spring air. Especially in a work like "Whisps of Fall" (oil on canvas, detail pictured), the composition appears so natural, the brushwork so seemingly effortless, that you almost expect hints that it's a photograph to appear in the frame. In other works, the brushstrokes are bulkier, more expressionistic, but also like the result of a germination as opposed to an artist's imposition. (Brian Staker) Francesc Burgos & Hadley Rampton @ Phillips Gallery, 444 E. 200 South, 801-364-8284, through June 12, Tuesday-Friday, 11 a.m.-6 p.m.; Saturday 11 a.m.-4 p.m. Phillips-Gallery.com

If a Utah theatrical organization is going to produce a stage adaptation of a best-selling book, they usually need to wait for a premiere in a major media market and hope the rights can trickle down eventually. But three women in the BYU theater department—director Megan Sanborn Jones, playwright Lisa Hall Hagen and dramaturge Janine Sobeck—decided to cut out the middleman and secure the rights to local author Shannon Hale's 2005 young-adult adventure Princess Academy. The production retains the story of Miri, a simple 14-year-old girl from a mountain town in the kingdom of Danland. A prophecy by the royal priest dictates that one from her town is to be the bride of the prince, so Miri and her peers are taken away to train as potential royalty. But others know the value of a future princess, and Miri will need to call upon her new knowledge and strength to save them all. (Scott Renshaw) BYU Department of Theatre: Princess Academy @ Pardoe Theatre, Harris Fine Arts Center, BYU Campus, Provo, May 29-June 13, 7:30 p.m., Saturday matinees 2 p.m., $9-$12. Arts.BYU.edu

It's not easy to mix farce and serious exploration of institutional racism without some kind of tonal matter/anti-matter explosion. Yet somehow, that's what People Productions manages in its staging of David Henry Hwang's funny and piercing Yellow Face. The Tony Award-winning playwright launches his story with himself (played by Michael Tadashi Havey) as a central character, involved in public statements against the controversial 1990 decision to cast actor Jonathan Pryce as a Eurasian character in the Broadway production of Miss Saigon. But then comes a potentially career-sabotaging mistake: He unwitting casts a white actor, Marcus G. Dahlman (Cody V. Thompson), in his own new play satirizing "yellow-face" casting, forcing him to support the fiction that "Marcus Gee" actually has Asian ancestry. Director Kerry Lee keeps up a lively pace, centered around Havey's wonderful performance as a version of Hwang that the playwright isn't afraid to make look ridiculous and petty at times. The diverse ensemble cast allows for some entertaining, theme-appropriate color-blind casting across multiple roles, including African-American actress McKenna Jense playing Jane Krakowski and Asian-American actors playing white U.S. Senators. But the real trick here is the seamless manner in which Yellow Face swings from its most over-the-top comedic scenarios—like Hwang seething over Marcus getting recognition from an Asian-American organization—to the fact-based persecution experienced by Asian-Americans whose patriotism is easily questioned. Hwang explores many things we can see when we see a yellow face, and does so in a way that's as entertaining as it is thoughtful. (Scott Renshaw) People Productions: Yellow Face @ Sugar Space Arts Warehouse, 132 S. 800 West, May 29-June 14, Friday-Saturday, 7:30 p.m.; Sunday, 3 p.m., $15. PeopleProductions.org

In Colm Tóibín's 2009 novel Brooklyn (the film adaptation of which debuted at Sundance this year), he brought readers to his own Irish hometown of Enniscorthy in County Wexford, to tell a story of a 1950s community where everyone knows one another—at times, to a fault. He returns to that world in the 1960s-set Nora Webster, once again crafting a beautiful story of a woman straining against the life everyone around her expects her to lead. Nora is recently widowed in her mid-40s as the novel opens, left to care for the two youngest of her four children and pick up the pieces of her shattered life. That includes returning out of financial necessity to the employer for whom she worked 25 years earlier and wrestling with the well-intentioned but often frustrating interactions with friends and family. Tóibín employs spare prose and a wry sense of humor in his observations about the insular Enniscorthy, and builds Nora into a wonderful, flawed character trying to deal with her own grief and anger even as she realizes she doesn't really know many of the people closest to her, including her own children. While Nora Webster may be a period piece set against some turbulent moments in Irish history, it still feels like a vital story of any woman's attempt, aside from her role as wife or mother, to find her own voice—in some cases, quite literally. Join the author for a reading and signing of his latest exceptional work. (Scott Renshaw) Colm Tóibín: Nora Webster @ The King's English Bookshop, 1511 S. 1500 East, 801-485-9100, June 8, 7 p.m., free. KingsEnglish.com