Odyssey Dance Theatre: Carmen
When a big anniversary for an arts company presents itself, such as Odyssey Dance Theatre's 20th, it provides the perfect opportunity to go big. Sometimes, it's a new commission or collaboration; other times, there can be reflection and retrospection. This contemporary dance company decided to celebrate in its own way, with a full evening-length world premiere of Carmen. Yep, that Carmen—the one best known as a 19th-century opera created by French composer Georges Bizet. But, before you think ODT—home of the annual Halloween pop-production Thriller—is going all highbrow for this party, remember that they've also re-imagined other classic works such as Romeo+Juliet, Giselle and The Nutcracker. Founder and artistic director Derryl Yeager has completely reworked this beloved opera, plugging its classic narrative into the 21st-century milieu of reality television. The story is still basically the same, but instead of a passionate tale of soldiers, cigarette girls and bullfights in Seville, ODT's Carmen involves behind-the-scenes events at a show called Just Dance, clearly modeled after the hit show So You Think You Can Dance? By utilizing the familiar narrative arc of the original—plus selected musical pieces from the classic score—this Carmen should still feel somewhat familiar. It's in the contemporary choreography, the updated setting and the inclusion of modern pop music where ODT is clearly hoping to transform a classic into a whole new piece accessible to younger audiences. Tackling such a risky endeavor is exactly what anniversaries are for. (Jacob Stringer) Odyssey Dance Theatre: Carmen @ Kingsbury Hall, 1395 Presidents Circle, University of Utah, 801-581-7100, March 5-7, 7:30 p.m., Saturday matinee 2 p.m., $20-$40. OdysseyDance.com, KingTix.com 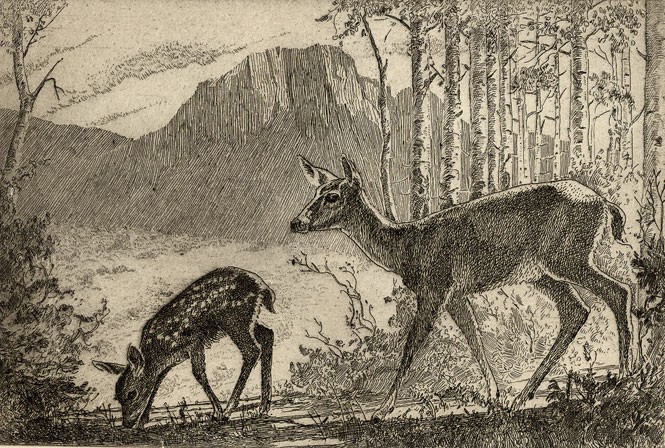 
As society becomes increasingly globalized, traditional notions of art history become less relevant. We can discover a unique relevance in Utah's own diversity and richness of culture, all of which contribute to a particular Utah art history. It's a history brimming with artists whose legacies and inspirations, connectivity and relationships, are an open door, waiting for us to enter. The pairing of two very different artists in the current Phillips Gallery show—Waldo Midgley, noted for his associations with famed New York City artists in the early part of the 20th century; and the generation-younger Francis Zimbeaux, ultimately a Modernist—demonstrates surprising similarities that are more overt than their differences. Midgley was a formative figure in expressive, freely rendered scenes of natural life—both flora & fauna and city life, both historic structures and scenes teeming with city-dwellers—that were immediately influential. Zimbeaux was inspired by scenes from nature and architectural renderings, with a similar liberality of gesture and color wash. But what truly draws them together is their mutual sense of the fantastical. With Midgley, this is represented in the etching "Doe and Fawn" (detail pictured), as the creatures—in woodland against picturesque mountain grandeur—convey an aspect almost otherworldly. Zimbeaux, with a modernist approach—as in "Untitled, 1995"—accesses the fantastical through a generous, loose use of line, rendering with uninhibited creativity a woodland scene with a pair of reclining nudes in the foreground, three nudes dancing in the center. They may have been one critical generation apart chronologically, but they were much alike in spirit. (Ehren Clark) Waldo Midgley and Francis Zimbeaux @ Phillips Gallery, 444 E. 200 South, 801-364-8284, through March 13. Phillips-Gallery.com 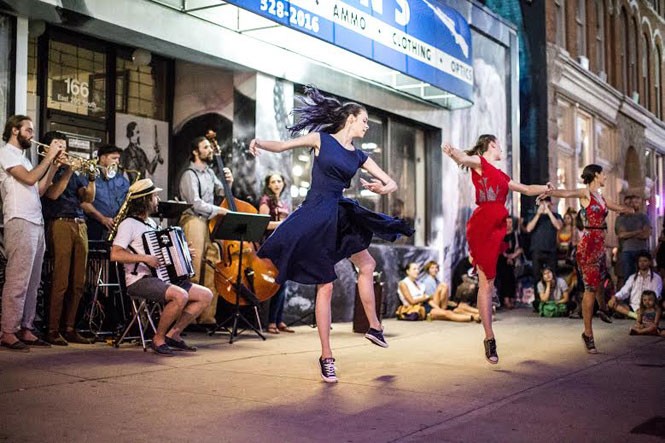 
Take just a moment to absorb that title, because the cognitive dissonance may already be setting in. "Rock & Roll Ballet"? How does that even work? Isn't ballet intended strictly to be paired with orchestral works—pretty music to accompany pretty costumes and pretty choreography? That perception is limited even where traditional ballet is concerned, but it's certainly not the way to think about Salt Lake City's Municipal Ballet Co. Now in its third season, the company—under the artistic direction of Sarah Longoria—has committed itself to expanding the notion of what you see in your head when you hear the word "ballet." And that includes performing with live local bands, as was the case in 2014's collaboration with St. Boheme that included street performances during Gallery Stroll Fridays. The new production, Oh Yeah!, finds Municipal Ballet Co. collaborating with Holy Water Buffalo, a quartet out of Heber City with a style reminiscent of vintage late '60s/early '70s album rock. As part of Municipal Ballet Co.'s ongoing commitment to making the art form even more accessible, their rehearsals took place at a space in Library Square, open to the public. The show will find the dancers setting their choreography to songs from both the band's 2010 self-titled debut CD and from their upcoming release Purple Mountain Majesty. If you never thought you'd want to raise your lighters at a ballet performance, get ready for something new. (Scott Renshaw) Oh Yeah! A Rock & Roll Ballet @ The State Room, 638 S. State, Salt Lake City, March 6-7, 8 p.m., $12.


Ira Glass is an American household name. The host and creator of the public radio program This American Life, Glass is one of the best storytellers of our time. And this week, this famous radio personality will give his professional dance show its debut, with a little help from some friends. Three Acts, Two Dancers, One Radio Host combines Glass's spellbinding stories with the interpretive dance of Monica Bill Barnes (New York City-based choreographer, performer and artistic director of Monica Bill Barnes & Company Productions) and Anna Bass (associate artistic director with MBB&Co). The show, like This American Life, comes in three acts: stories about the job of being a performer, about falling in love, and about the impermanence of everything. Those who saw the sneak preview of Three Acts, Two Dancers, One Radio Host when Glass was in Salt Lake City in 2014 understand the brilliance of this unusual artistic concoction. Those who missed it are probably wondering how dance and radio could ever work together on stage. After all, as Glass wrote in a recent blog post for This American Life, "Dance is all visuals, no talking. Radio is all talking, no visuals." But these very differences make the two art forms compatible and take storytelling to an even more powerful, emotional level. It also makes the whole performance—with props, costume changes and lighting cues—a lot more fun. Dancer Anna Bass says even Glass is still blown away by the show. The audience will be as well. (Katherine Pioli) Three Acts, Two Dancers, One Radio Host @ Peery's Egyptian Theater, 2415 Washington Blvd., Ogden, 801-689-8700, March 7, 7:30 p.m., $20-$30. EgyptianTheaterOgden.com 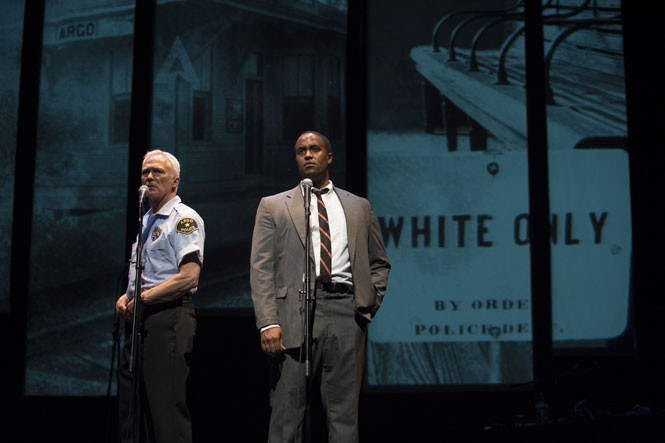 L.A. Theatre Works: In the Heat of the Night


L.A. Theatre Works has been a regular visitor to Utah, bringing performances such as RFK: The Journey to Justice and The Rivalry to local audiences in its unique "radio theater" style of minimalist staging and actors in front of microphones. The latest production takes the material from an Oscar-winning film and gives it a burst of contemporary relevance. Adapted for the stage by Matt Pelfrey from the book by John Ball, In the Heat of the Night tells the story of Chief Gillespie (James Morrison, pictured left), a bigoted Alabama cop who's none too happy when a murder investigation brings California police detective Virgil Tibbs (Ryan Vincent Anderson, right) to town circa 1965. And, while he doesn't like anyone stepping on his jurisdiction, he certainly doesn't like it when that "anyone" is black and prefers to be called "Mr. Tibbs." Take a new look at a classic story that still has the power to be provocative. (Scott Renshaw) L.A. Theatre Works: In the Heat of the Night @ Eccles Center, 1750 Kearns Blvd., Park City, 435-655-3114, March 7, 7:30 p.m., $20-$69. EcclesCenter.org