This week, Repertory Dance Theatre performs the second production of its 50th anniversary season, Revel, a concert that brings together elements of the company's rich past even while celebrating its future.

Crippled Up Blues reunites a creative duo: dancer Bill Evans, RDT company member from 1967-74; and Utah musician/folklorist Hal Cannon, whose first collaboration harks back to 1973. Forty years down the line, the two have cooked up a playful homage to their Utah home and heritage—and to growing older.

The program also includes the world premiere of Begging the Question by humorist/choreographer Claire Porter—who performed her one-woman show in Salt Lake City this past August—and the Utah premiere of Jack by Joanie Smith of Minneapolis-based company Shapiro & Smith. But the gem of the night likely will be She, a tribute to Virginia Tanner by choreographer Jacque Lynn Bell. It was Tanner's advocacy that helped solidify the original Rockefeller grant that made RDT a reality 50 years ago and for Bell, who as a child took dance lessons from Virginia Tanner, the opportunity to create a piece for her former teacher has been an honor and an enormous responsibility. "I'm the voice for so many people who have benefitted from her incredible vision," says Bell. In her attempt to show the scope of Tanner's influence, one still felt today, Bell has created a work with 26 dancers. They include RDT company members past and present, ranging in ages from 3 to 75, of the Children's Dance Theater, which Virginia Tanner founded in 1949. (Katherine Pioli) 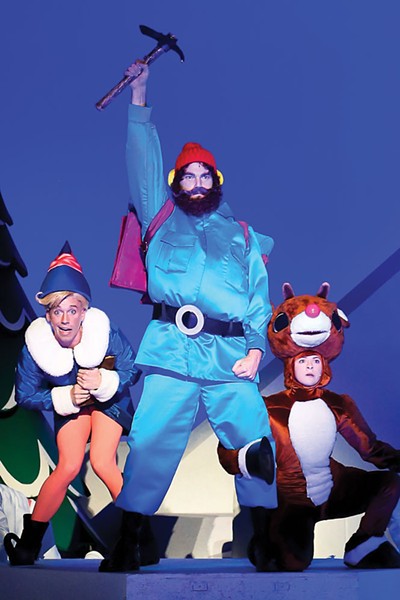 Rudolph the Red-Nosed Reindeer: The Musical

So, you're a Christmas expert: Not only do you know Dasher and Dancer and Prancer and Vixen—you can rattle off the names of the other four reindeer, as well as every single word to the song "Rudolph the Red-Nosed Reindeer." Likely, your reindeer smarts are thanks in large part to the 1964 animated Rankin-Bass TV special.

While watching RTRR: The Cartoon is a requirement for having a classic Christmas, you can also spend an entire evening enjoying the songs and watching the characters come to three-dimensional real life when Rudolph, the Red-Nosed Reindeer: The Musical comes to town. A national touring company will give five performances at the Capitol Theatre, from Nov. 20 to 22.

The musical version uses a combination of costumed actors, puppetry, scenery and projections to bring the RTRR story to life while sticking close to its stop-motion animation roots. All of the characters are there, from Yukon Cornelius to King Moonracer to the Abominable Snow Monster. The story is still about how the fascists of Christmas-town drive Rudolph out due to his "misfit" ways that threaten the social order. He eventually comes back to save the day and make everybody see they were behaving like idiots. Even Santa has to admit he was acting like a jerk.

Anybody who's every been barred from the Reindeer games, been teased for being different or just plain felt like they wanted to take refuge on the Island of Misfit Toys—in other words, pretty much everybody—can relate to Rudolph. Enjoy an evening of entertainment while dreaming of how you will exact a horrible revenge on your unsuspecting enemies ... errrr, ummm, come back and save Christmas. (Geoff Griffin) 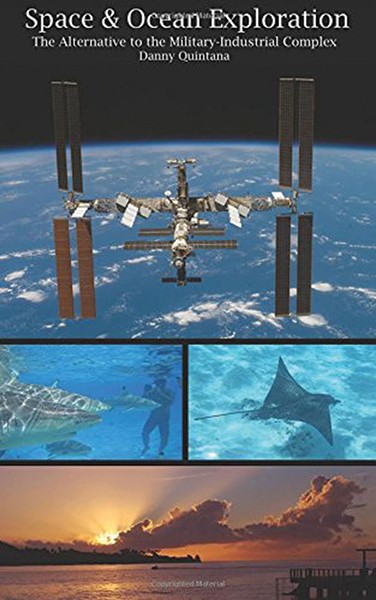 When President Dwight Eisenhower warned in his farewell address of the "military-industrial complex," he foresaw an economic juggernaut that could be impossible to slow down, as economies grew to depend on military spending. And political will can be hard to find when so many jobs are dependent upon direct and indirect American military spending.

Local attorney and activist Danny Quintana has come up with a provocative alternative in his new book Space & Ocean Exploration: The Alternative to the Military-Industrial Complex. It's not enough, he argues, to say that we must cut our massive military-spending budget; that spending needs to go somewhere, in a way that will not cripple communities that have grown to depend on military bases or military contractors as pillars of their local economies.

Quintana's proposal is to redirect that spending—and the technical/scientific/policing power of the American military—toward work that may help preserve our planet. As humanity faces threats to the environment from climate change, overpopulation and the depletion of the world's fisheries, Quintana argues, military might could be channeled into the exploration of space in an effort to expand medical knowledge, or even help protect the Earth from asteroid strikes. And the defense of oceans from overfishing would be an ideal mission for naval vessels. In a work that combines optimism with political pragmatism, Quintana offers a bold way of considering changing the world through a change in perspective. (Scott Renshaw) 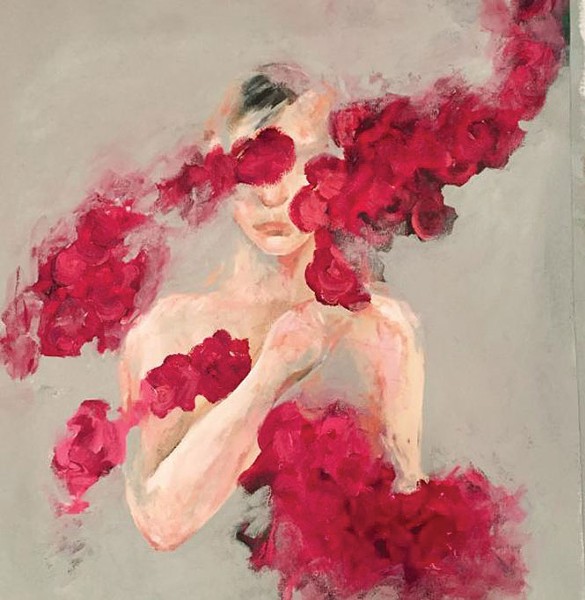 In her paintings, Sarina Villareal delineates the shifting borders between representation and abstraction, with human figures as well as flora suspended in a watery background that emphasizes their fluid qualities. The artwork becomes a representation of memory traces, not as distinct as we might assume.

Her new series, Efflorescent Interference, takes the process even further, "using myself as a subject of neuropsychological experimentation," she writes in her artist statement. The morphology of the figures in these acrylic works is shifting, as though movement altered not only their position but their definition; it seems intended as analogous to thought. The deft compositions ("Rose Interference," detail above) draw your eye in to the decorative quality of the works, and render the conceptual framework a bit of a clever subterfuge.

Coming to fine art from a career in design and advertising, Villareal's work demonstrates a certain stylish composure that is a sign of self-assurance. The artist has exhibited widely in local venues and is represented by 15th Street Gallery. She cites the influences of abstract expressionist Cy Twombly and colorist Frank Klein, as well as more contemporary works by Jenny Saville and Susan Rothenberg. Monet's "Water Lilies" comes to mind with her subject matter.

It was a bit of a wait after Wiseguys Comedy vacated its Trolley Square location, and the downtown core was missing that regular dose of weekend laughs. But a new location at the Gateway finally launched in early November, with a prime spot at the mall's southeast corner. And headliners including Gilbert Gottfried, Jeff Dye, Dwayne Perkins and filmmaker Kevin Smith are already lined up through early 2016.

This weekend, if you're eager to check out the new venue and revel in the funny, you can catch one of Utah's most talented comedians. Jay Whittaker—City Weekly's 2014 Best of Utah Arts award winner for Best Comedian. Whittaker brings his distinctive style out from behind the microphone of the also-award-winning Geek Show Podcast and in front of audiences. You might not see him engage in a push-up contest with Anthony "The Falcon" Mackie like he did at this year's Salt Lake Comic Con, but there's always something entertaining happening when Whittaker's on a stage. (Scott Renshaw)