The Golden Age of radio and its dramatic serials was short-lived in the face of television. But a new local radio theater company created by Lane Richins and Jeffrey Owen aims to bring some highlights of that era to the present with a performance of two Ray Bradbury science-fiction classics, just as at-home audiences would have heard them on the air in 1950. "We want to give the audience the feeling of sitting in on the first recording of these programs 60 years ago," says Richins, co-artistic director and player. "Radio theater is the first artistic obsession I can remember having, and I wanted to recreate that live." An eight-member cast will perform the original scripts of The Martian Chronicles and Mars Is Heaven, and authentic local commercials and news broadcasts from the era will be included, enhancing the nostalgic feel of the Golden Age of Radio. In keeping with the production of studio performances back in the day, there will be no set; the emphasis in radio theater is sound. An original soundtrack composed by Jason Rabb and Nick Foster will accompany the radio plays, along with Jon Clark's foley/sound effects. "It's probably the only time on stage we as performers are happy to see people with their eyes closed in the audience," Richins says. The Salt City Radio Players project is designed to revitalize muddy auditory senses and imaginations. "We're all sensory beings," Richins says, "and our hope is through the various use of our senses in these programs, we can unlock imagination and magic." (Deann Armes) Salt City Radio Players @ The Urban Lounge, 241 S. 500 East, 801-746-0557, Nov. 6, 7:30 p.m., free. TheUrbanLoungeSLC.com


This year, Art Meets Fashion will do something a little different. At the autumn version of its semi-annual event, it will launch what it's calling "a new community platform for emerging fashion designers and fine artists." The exhibition Liminality: The Space Between Spaces kicks off this new service, and it's an intriguing theme: The theory of liminality examines things that aren't nailed down, and are given to indeterminacy or ambiguity. The word literally means "threshold," and it's a demarcation of entrance into something that could be fascinating. AMF has already melded two worlds that are similar but also have sharp contrasts, so a closer examination of that in-betweenness should provide enlightening insights. Notable international artists are showing works that use liminality as a jumping-off point, including Azamat Akhmadbaev from St. Petersburg, Russia, and Josh Bowe from the U.K. Local artists on display will include Matt Monson, who has straddled the realms of art and fashion; fashion designer/stylist Rachael Lorene Domingo; and the art brut abstractionism of Andrew Rice and Mark Seely. Rice's work in particular—featured at the Rio Gallery earlier this year—fits the theme, with the symbolism of dimly lit doorways. Fall is a huge season in the fashion world, but AMF is foregoing its usual runway shows until the spring. After the opening, the exhibition will be on display at Photo Collective Studios. (Brian Staker) Art Meets Fashion: Liminality: The Space Between @ Publik Coffee Roasters, 975 S. West Temple, 801-355-3161, Nov. 6, 9 p.m.-midnight, RSVP required, $15 suggested donation. Facebook.com/ArtMeetsFashionAMF


The "mad scene" of Giselle is one of the great solos in the history of ballet—not so much for its athletic demands as for its emotional demands. Although it is physical in spots, the real brilliance is how the ballerina conveys Giselle's tragic death from heartbreak. That's not a finale "spoiler." Giselle, an innocent village girl, falls in love with Albrecht, a duke masquerading as a peasant. When Hilarion—a gamekeeper who also loves Giselle—reveals Albrecht's true identity, she goes mad from believing they can never be together. The young woman quite literally dies of a broken heart in the arms of the beloved she cannot have. The heroine's death ends the first act, and her ghost takes center stage for the remainder of the ballet. Act 2 is when the real fun begins, with a ghostly group of spurned women hell-bent on taking revenge upon men everywhere. After they raise poor Giselle's spirit from the grave to join them, they quickly find Hilarion and force him into dancing to the point of exhaustion so they can drown him in a nearby lake. Next up: Albrecht. Just imagine a couple of bewitched guys, both of whom once loved Giselle, pleading for their lives through extreme dance. The dramatic material continues through the last dance of the two star-crossed lovers. The choreography is designed to keep Giselle's touch on the stage light as a ghost, but still convey a strength of love and devotion that will ultimately keep Albrecht from meeting his death. (Jacob Stringer) Ballet West: Giselle @ Capitol Theatre, 50 W. 200 South, 801-355-2787, Nov. 7-16, Wednesday-Friday 7:30 p.m., Saturdays 2 & 7:30 p.m., Sundays 2 p.m., $29-$84. ArtTix.org, BalletWest.org


Art festivals can be intimidating affairs in their ambitious attempts to cover a lot of ground. And as exciting as such festivals can be, it can be satisfying as well to find a focus that allows for a very specific perspective on an artistic tradition. The Jewish Arts Festival—sponsored by the I.J. & Jeanné Wagner Jewish Community Center—has in the past showcased comedy, music and other arts with a culturally specific focus. For 2014, however, the focus is on film, with a wide range of genres and topics covering the Israeli Jewish and Jewish-American experience. Opening night features Under the Same Sun (pictured), a speculative drama that imagines a world after peace has been negotiated between Israel and Palestine. The evening includes catered dinner from Mazza and a post-film Q&A with Susan Koscis from Search for Common Ground. Other highlights of the six-day event include: A Matter of Size, an Israeli comedy about an overweight man trying to make peace with his size by getting involved in sumo wrestling; Do You Believe in Love?, a documentary about a disabled Israeli matchmaker who specializes in finding partners for other disabled people; and closing-night film Make Hummus Not War, a humorous documentary exploration into the culinary history of the chickpea dish as it applies to Middle East politics. Share a hummus tasting after that film to wrap up this cinematic taste of Jewish culture. (Scott Renshaw) Jewish Arts Festival @ I.J. & Jeanné Wagner Jewish Community Center, 2 N. Medical Drive, 801-581-0098, Nov. 8-12, $30 opening night, $5 per film or $50 full festival pass. SLCJCC.org 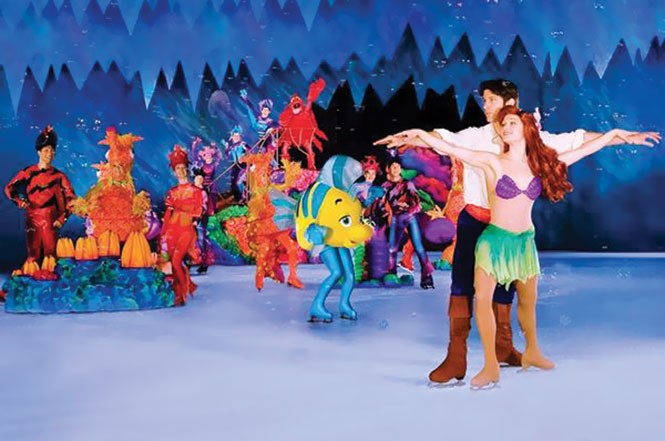 Disney on Ice: Worlds of Fantasy


It doesn't seem to matter where they see them: Kids love their Disney characters. On the screen, in theme parks or even on a frozen arena surface, they grab hold of young imaginations in a way that's hard to shake. The latest Disney on Ice production, Worlds of Fantasy, gathers inhabitants of four distinct movie worlds for an evening of familiar music, fluid motion, colorful production design and unique technological effects. The tale of Cars includes scale representations of Mater and Lightning McQueen, complete with molded rubber talking mouths. From Radiator Springs, the show moves on to the undersea kingdom of The Little Mermaid, the magical Pixie Hollow of Tinker Bell, before visiting with Woody, Buzz and their friends from Toy Story 3. The little ones will wonder how the movies can be brought to such energetic real life. (Scott Renshaw) Disney on Ice: Worlds of Fantasy @ EnergySolutions Arena, 301 W. South Temple, 801-355-7328, Nov. 12-18, $20-$50, limited $15 opening-night tickets available. DisneyOnIce.com/world-of-fantasy