One of the best parts of being a true repertory dance company—especially one that's been curating work since 1966—is that each time you stage a new performance, you have a deep well of works to draw from. For its season opener, Portal, Repertory Dance Theatre is dusting off something from 1970 and combining it with something as fresh as a world premiere. Two of the four pieces on the program are commissions by the company, including Stephen Koester's surrealist Fever Sleep (2005) and Viola Farber's Passengers (1970), inspired by Merce Cunningham's "chance philosophy" of movement in which the dancers use spontaneity and individual choice to help shape the work. Also featured are Zvi Gotheiner's Duets to Brazilian-Indian Music (1998) and the aforementioned world premiere, created by the Israeli duo of Noa Zuk & Ohad Fishof, both former dancers with Tel Aviv's famed Batsheva Dance Company. Founded in 1964 by Martha Graham and Baroness Batsheva de Rothschild, the acclaimed company has long been led by Ohad Naharin, who is responsible for developing the Gaga Movement Language. In a way, it is more a philosophy of movement, in which practitioners are encouraged to engage with the natural rhythms of the body and tune them to the rhythms of the universe—to use the push and pull of tension and release, minute and grand gestures alike, to center the body and the mind. Zuk and Fishof's By The Snake was created within this unique choreographic framework, and further enhances RDT's ever-expanding repertoire. (Jacob Stringer) Repertory Dance Theatre: Portal @ Rose Wagner Center, 138 W. 300 South, 801-355-2787, Oct. 2-4, 7:30 p.m., $30. RDTUtah.org, ArtTix.org


Provo-based illustrator Kim Peterson has an artistic style that draws from Japanese anime and traditional comics, and she's worked at San Diego Comic Con and taught after-school art programs and at the Scera Arts Studios. She enhances her creative process by listening to music while she works—but not as background noise. She tries to draw connections between art and music and between the visual and auditory senses. Her artistic process is a bit like a science experiment. Her Synesthesia exhibit is unique because, as the title infers, it connects sight and sound to give visitors an entirely different experience from viewing the works in silence. Peterson believes the music at the show might change the perception of her works and their emotional tone, shifting them even from sinister and foreboding to hopeful or humorous. (Brian Staker) Synesthesia: A Visual+Audio Experience by Kim Peterson @ Salt Lake City Main Library, 210 E. 400 South, 801-524-8200, through Oct. 5, free. SLCPL.org

The Urban Arts Gallery has fostered various kinds of artistic alchemy ever since its opening, with art from found objects and transformative takes on urban subject matter of all kinds. The gallery's most recent show cements its style—but the exhibit also takes it in some new directions. The featured artists include Scott Filipiak, Preston Grimes, Cory Gurney, Liza Julie, KUHR, Christian Rothenhagen and SRIL (pronounced "Surreal"). A graffiti genius in the local street-art scene for going on two decades now, SRIL combines the methods of street art with an aesthetic influenced by Salvador Dali to create something truly unique. Berlin-based Rothenhagen has previously exhibited in Salt Lake City at Urban Arts and Kayo Gallery. Creative director/graphic designer/photographer Filipiak has served on the board of directors of the Springville Museum of Art. DJ Kira will provide music nightly from 6 to 8 to accompany the urban art. (Brian Staker) Urban Alchemists @ Urban Arts Gallery, 137 S. Rio Grande St., 801-510-0827, through Oct. 12, free. UtahArts.org


Bernard C. Meyers' "Porter's Porch" is perhaps the most straightforward of the photographs found in his collection Between Worlds, currently showing at Alice Gallery. The viewer can imagine standing at a back porch, gazing wide-eyed through a screen into a grey and misty void with thoughts going nowhere and everywhere. This is exactly the place Meyer wants the viewer to arrive at in his series of photographs, which get far more complex, metaphorically speaking, between worlds—in this case, between the present and some place "out there." "I pray these images provide some tangible experience, a diaphanous glimpse into the boundaries between worlds," Meyers says. Most of the black & white photos involve subjects within or around a derelict greenhouse. While they serve to capture the reality of the setting, they also take advantage of the ambiguous elements and form of the greenhouse. Viewers might find themselves connected to that specific place, yet also transported, enough so they might find that border between realities that Meyers is concerned with. Why an abandoned greenhouse? In "Victorian Amazonia" (pictured), the universality of the subject is clear—the boldness of the shapes, the intense contrasts of light and dark, the immediacy of texture and the strong shadows. The occurrences Meyers is trying to reproduce are best found within the austerity and complexity of the natural world, where reality cannot be mistaken for artifice. (Ehren Clark) Bernard C. Meyers: Between Worlds @ Alice Gallery, 617 E. South Temple, 801-236-7555, through Nov. 14, free. AliceGallery.org 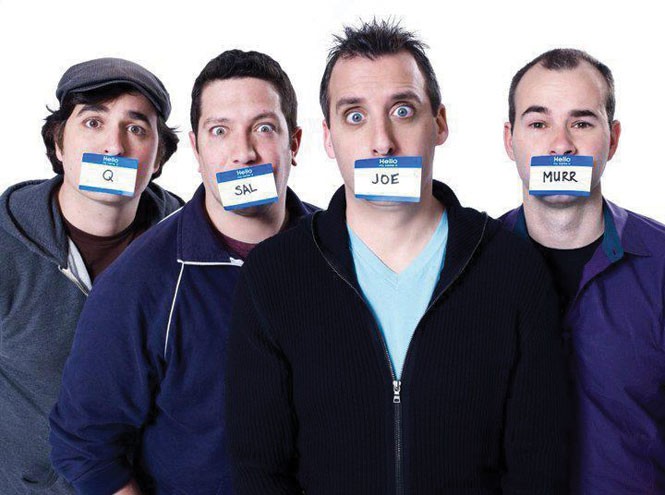 
As any comedian working in the industry knows, regularly pitching pilots to television executives is just part of the job—as is the rejection of most of those ideas. The members of The Tenderloins comedy troupe have pitched and produced pilots for Spike TV, A&E, TBS, CMT and VH1, not to mention some independent Internet sketches and webisodes—and most have never seen the light of day. But the boys hit their stride with TruTV's Impractical Jokers, currently in its third season of hidden-camera shenanigans. Now the four friends from Staten Island—Sal Vulcano, Joe Gatto, James Murray and Brian Quinn—are taking those antics out on the road. The live show features a blend of never-aired hidden camera videos, some traditional stand-up from the guys and a little storytelling about the making of the show. They might even talk about their newest pitch: a comedy variety show, which has been turned into another six-episode series scheduled to air this fall on TruTV, Jokers After Party. (Jacob Stringer) The Tenderloins: Impractical Jokers Tour @ Abravanel Hall, 123 W. South Temple, 801-355-2787, Oct. 3, 7:30 p.m., $49.50-$125. TheTenderloins.com, ArtTix.org

Body Worlds & the Cycle of Life


The traveling exhibit Body Worlds will reach its 20th anniversary next year, and its newest opening is a kind of ode to longevity. In 2008, Body Worlds 3 came to The Leonardo when the museum wasn't officially open yet, and the exhibit helped The Leo make a big splash in the community with a subject that touches people in very personal ways. The Cycle of Life follows the span of a human being's existence from conception and prenatal development to death, and carries an emphatic message: Our own actions have an immense impact on our health and quality of life, reflected starkly here in cancerous lungs and diseased livers. Body Worlds' exhibits are created through the plastination process, which replaces the natural fluids in bodily organs and tissues with liquid plastics. The anatomical specimens are then molded into poses to illustrate movements and conditions of the human body. The Cycle of Life includes hockey players and an aged man leaning on a cane among the 19 full-body specimens on display. The exhibit features more than 200 plastinates, most of which are new to The Leonardo, as well as photographs, diagrams, explanations about topics like free radicals, and epigrams like "Life's like a play: it's not the length, but the excellence of the acting that matters." (Seneca) With all the examples of healthy versus unhealthy lifestyle practices, some of the most poignant images are those of donors who gave their own bodies upon their death to help us understand what it means to be alive. (Brian Staker) Body Worlds & the Cycle of Life @ The Leonardo, 209 E. 500 South, 801-531-9800, through January 2015, $14.95-$19.95. TheLeonardo.org 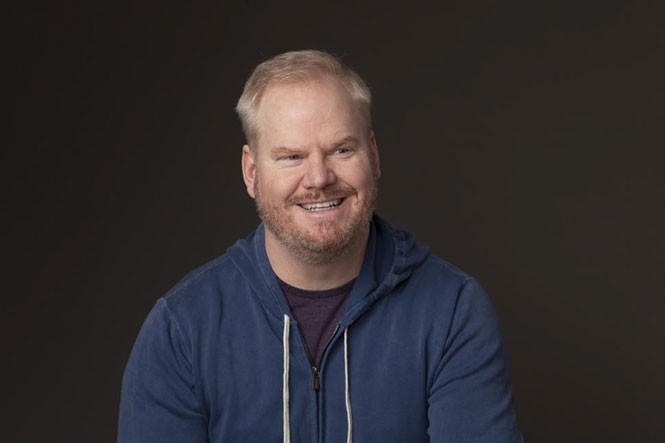 
Jim Gaffigan is some of the best proof there is that stand-up comedy is a discipline requiring immense skill. He draws his material from some of the most mundane things imaginable—like Hot Pockets—and by some alchemy transforms deadpan riffs about them into comedy gold. He talks about laziness—the act of doing literally nothing—and finds something in it, all with a flat Midwestern delivery seemingly devoid of any tone or even emphasis. His technique serves a purpose: a thing is funny when it's surprising. And so, whether he's acting or just being himself, Gaffigan's array of techniques produce wonderfully effective comedy. This is how a guy who talks about laziness and Hot Pockets becomes, over the course of more than 20 years in the business, one of the most respected and enduring stand-ups of his generation. Most impressive of all is how his comedy paints a satiric portrait of white American maleness—with his own exterior as the canvas—that is unforgiving without being mean. Author of the 2013 memoir Dad Is Fat and the brand-new book Food: A Love Story, Gaffigan has had numerous hit albums, most notably Beyond the Pale, King Baby, Mr. Universe and Obsessed. His TV work includes notable turns on Dr. Katz, The Ellen Show, My Boys, That '70s Show and the recurring Pale Force bit on Late Night With Conan O'Brien. (Danny Bowes) Jim Gaffigan @ Abravanel Hall, 123 W. South Temple, 801-355-2787, Oct. 4 & 5, Saturday 7 & 9:30 p.m., Sunday 7 p.m., $38.75-$48.75. ArtTix.org 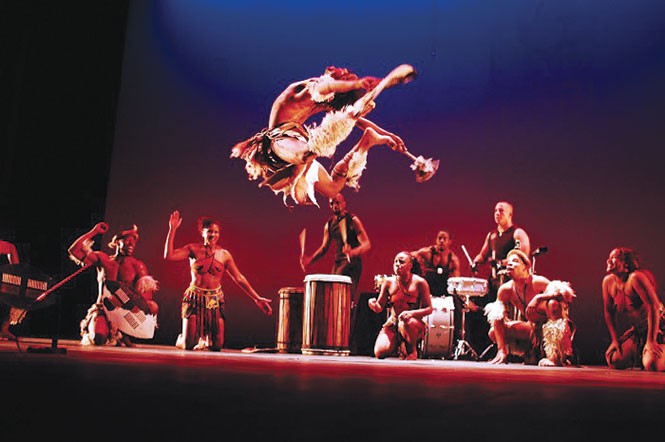 Washington, D.C.-based professional dance company Step Afrika! is a powerful experience that, for many Utahns, will likely be a surprising and inspiring introduction to the African-American dance tradition of stepping. Stepping often uses no instrument besides the dancers’ own bodies. This drum-absent rhythmic tradition is partially rooted in the Gumboot dance, a stepping predecessor created by black South African miners after white authorities outlawed drumming. Today, however, this proud and important artistic and cultural tradition is rising, evolving into a new art form. Using their full range of motion and every skinned surface from their chests to the soles of their feet, Step Afrika! performers tap, clap and stomp intricate, dazzling rhythms woven together with a fully performative and aesthetic style drawn from the movement disciplines of jazz, break dance, tap and modern dance. Calling this movement complex is an understatement. It is beautiful and moving. (Katherine Pioli) Step Afrika! @ Kingsbury Hall, 1395 E. Presidents Circle, University of Utah, 801-581-7100, Oct. 4, 7:30 p.m., $5-$32. KingsburyHall.utah.edu


In her latest middle-grade series, local fantasy author Jessica Day George—awarded the Whitney Award for Best Book by a New Author for Dragon Slippers in 2007—takes readers to a far-off place and time, where dragons not only live but become pets, and royal castles have minds and movements of their own. Thursdays With the Crown, the third in the series that began with Tuesdays at the Castle, begins right where the previous book left off, with princess Celie and her siblings having been spirited away to an unknown land. Once there, they embark on a journey through a forest in an effort to find their way home. What they discover instead are wizards and a land of lost people who were once inhabitants of their home, Castle Glower. The lost people know a lot about the castle, but can they help them get back home? (Aimee Cook O'Brien) Jessica Day George: Thursdays With the Crown @ The King's English Bookshop, 1511 S. 1500 East, 801-484-9100, Oct. 6, 7-9 p.m., signing free with book purchase. KingsEnglish.com