Differences—A Dialogue
Vive la difference! Our differences are what make humans so fascinating, part of what makes getting to know each other so rich and rewarding. But differences can also create distance, keep us separate—and, for some, can be disempowering. The Differences group exhibit at Art Access examines differences, identity, perspective and power through the works of 20 local artists with a wide variety of experiences and aesthetics. Show curator Marcee Blackerby creates mixed-media assemblages such as art boxes that use found objects as source material (an untitled piece is pictured). She is also an author and storyteller, and has selected an array of artists for the show who tell their own powerful stories, including Grant Fuhst, Logan Madsen, Frank McEntire, Cat Palmer, Bonnie Sucec, Stephanie Swift and Travis Tanner. The methods through which an artist like McEntire encounters the spiritual and the way Sucec uses the mythological in her work should provide illuminating insights about differences that can be obstacles, and will also help create a more diverse community. Art Access' Disability & Literature Book Group will conduct several discussions about works of historical fiction that deal with ways communities respond to difference, in conjunction with the Utah Humanities Book Festival. As with all Art Access programs, the exhibit is intended to promote dialogue and discussion about the subject. Showing concurrently in the Art Access II space is a juried exhibition of veterans' art. (Brian Staker) Differences—A Dialogue @ Art Access Gallery, 230 S. 500 West No. 125, 801-328-0703, through Nov. 14, free. AccessArt.org


The Rocky Horror Picture Show pretty much invented the way we think about cult movies, and after years of midnight showings, has become the longest-running film in history. With screenings involving costumes, props and scripted lines for the audience, the film has made the leap from a simple movie viewing to a participatory experience. What sets Rocky Horror—and Richard O'Brien's original stage musical, from which the movie is drawn—apart is that it's campy on purpose and is such a good-natured celebration of the kinky and bizarre. It's no accident that Rocky Horror, in both film and stage incarnations, occupies a central place in queer teen culture, as it's material that welcomes rather than drives away audiences with not-entirely-vanilla predilections. Pioneer Theatre Company's production of O'Brien's The Rocky Horror Show carries with it the always-encouraging "warning" that it "contains strong themes, sexual content and language" (though one audience member's warning is another's enticement). Attendees are encouraged to dress up, and are trusted to be familiar enough with the material to know what that entails. Also, "audience participation kits" with show-appropriate materials will be available for purchase for $5, and this humorous list of prohibitions: "Please no water, no rice, no open flames, and no real sausages (except Frank)." (Danny Bowes) The Rocky Horror Show: Concert Version @ Pioneer Memorial Theatre, 300 S. 1400 East, Oct. 24, 8 p.m. & Oct. 25, 5 p.m. & 10 p.m., $20–$40. PioneerTheatre.org


Stephen Brown, founder and artistic director of SB Dance, seems to be drawn to the musicality of a production. In years past, he has produced programs such as Yoga the Musical and Revenge of Yoga the Musical. Last year at this time, he went full rock opera with Of Meat & Marrow, an evening-length work with shredding guitars and piercing vocals by local rock outfit Totem & Taboo. However, his new creation, Cannibal: A Love Story, is far from a rock opera. Instead, it plays like an Off-Broadway, jazz-based musical full of pretty songs that flirt with the flayed underbelly of life. Set in a new a trendy pop-up eating establishment founded by restaurateur Gen (Genevieve Christianson), the story follows a restaurant critic named Dan (Dan Larrinaga) who has come to check out the six-month experiment. Both main characters are seeking something greater, and that energy ultimately propels the title-spoiling narrative. With a score by Jeffrey Price, a cast filled with SB Dance regulars and Brown's natural ability to create something surprising each time he sets out to stage a new production, this is unlike any of his past musical outings. As he himself puts it, Cannibal is "jazz noir circus opera." There is a little of all that in there. Take Brown's love of the prop: In Cannibal, there are a few familiar items, like black umbrellas, but dancers also wield huge butcher knives while maneuvering through intimate and intricate movement. And that literal knife-edge balance is what provides the perfect tension in such a darkly appetizing production. (Jacob Stringer) SB Dance: Cannibal: A Love Story @ Rose Wagner Center, 138 W. 300 South, 801-355-2787, Oct. 24-25, 8 p.m., $22.50. SBDance.com, ArtTix.org


The roster of comedians whose tenure on Saturday Night Live was brief and inauspicious—Sarah Silverman, Ben Stiller, Janeane Garofalo, Damon Wayans—should ease the blow for Brooks Wheelan of getting dropped from SNL's featured-player roster after just one season. Indeed, he already seems to be finding humor in it, joking with the Fusion's No You Shut Up at the Montreal Comedy Festival that he preferred stand-up to sketch comedy because "I haven't been fired from that one, so I choose that." And he's got plenty of reason to expect that he can do just fine with this stand-up thing, building his routines at times around his Iowa upbringing, like the traumatic impact of watching his father kill a possum with a sledgehammer. At other times, he turns to the topic of his current, more urban surroundings, like having "meth neighbors": "They're loving meth ... And I'm jealous, because meth neighbors shouldn't be having a better life than me. But they are." (Scott Renshaw) Brooks Wheelan @ Wiseguys West Valley, 2194 W. 3500 South, 801-463-2909, Oct. 24-25, 7:30 & 9:30 p.m., $15. WiseguysComedy.com 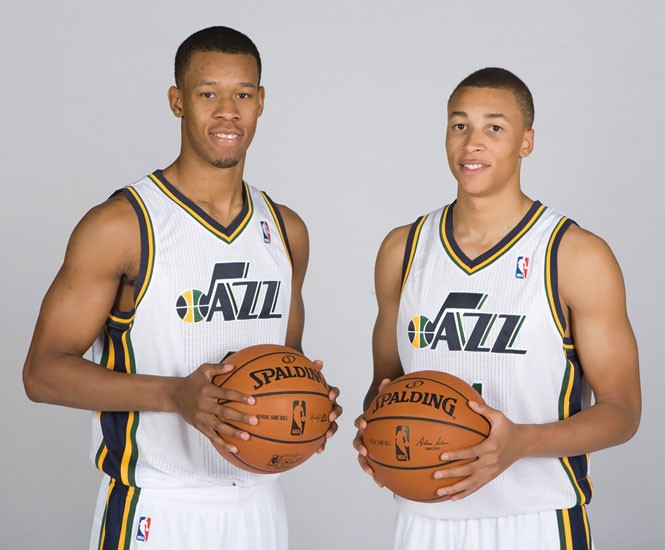 
Did we mention that this NBA rebuilding thing usually takes more than a year to complete? TheUtah Jazz, under new head coach Quin Snyder, enter the season withat least eight players on the roster who were bornin the 1990s—and not just "barely after theBerlin Wall came down/Desert Storm/sort of early 1990s." We're talking guys with birth datesthatcan technically be called the mid-'90s. No surprise, then, that most prognosticators have the Jazz pegged as being the worst teamwest of Milwaukee. Vegas odds-makers have placed their over/under for wins at 24.5—right about where they finished last season at 25-57. All of that means that the coming winter of 2014-15 might not be all that much fun, but if you're a Jazz fan, you can't look at it that way. You need totake the approach of possible presidential candidates, and look at this thing with an eye to where you will be inNovember 2016—or, better yet, January 2017. If the Jazz—and their fans—can slog through the tough campaign trail of the next two seasons while developing young talent such as Rodney Hood and Dante Exum (pictured),they may be rewarded in 2016-17. The Jazz open the season at home with the Houston Rockets. Other highlights of the home schedule for the next month includeLeBron James and Cleveland on Nov. 5, OKC on Nov. 18, Chicago on Nov. 24 and theL.A. Clippers on Nov. 29. (Geoff Griffin) Utah Jazz vs. Houston Rockets @ EnergySolutions Arena, 301 W. South Temple, 801-325-7328, Oct. 29, 7 p.m., $16-$210. UtahJazz.com