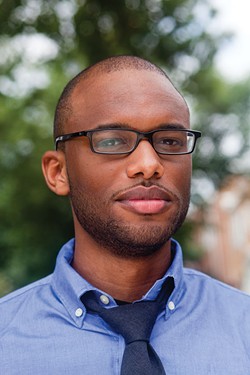 In April 2015, The Nation contributing writer Michael Denzel Smith wrote a blog post with a provocative premise: Why not abolish the police? In light of the widely publicized acts of violence against people of color by police officers and statistics that suggest that 90 percent of police activity involves enforcing municipal rules like traffic violations and the like, would all of us—not just wealthy white people, but all of us—actually be safer if there were no police at all? "I don't know what a world without police looks like," Smith wrote. "I only know there will be less dead black people. I know that a world without police is a world with one less institution dedicated to the maintenance of white supremacy and inequality. It's a world worth imagining." Since August, the Salt Lake City Main Library has been celebrating the 150th anniversary of The Nation with presentations by contributors to the magazine, covering a wide variety of hot-button topics. And few are hotter than Race & Policing, the topic of Smith's presentation this week which wraps up the series. Smith has interviewed the founders of #BlackLivesMatter and is the author of the new book Invisible Man, Got the Whole World Watching, a mix of memoir and political commentary about the evolution of the experience for young black males in the years since the election of Barack Obama. Join Smith in a conversation where there are no easy answers. (Scott Renshaw) Mychal Denzel Smith: Race & Policing @ Salt Lake City Main Library Auditorium, 210 E. 400 South, 801-524-8200, Oct. 8, 7 p.m., free but registration is recommended at SLCPL.org/events/view/4294

Detritus, refuse, garbage: Call it what you will, the by-products of everyday life, with all their packaging, marketing and "planned obsolescence," amount to a massive collection of objects and materials we spend an inordinate amount of energy to discard and avoid. In a manner of speaking, we're rendering them almost ubiquitous in their conspicuous absence. Sacramento, Calif.-based artist Elisabeth Higgins O'Connor has found a way to repurpose found objects—like fabric scraps and other castaways of consumerism—by fashioning them into sculptures that seem to take on human qualities; "Muppet-like" might be the most apt description. Simultaneously monstrous and endearing, both qualities are the result of a brush with the familiar, which is then turned by the artist into something radically different. The twin titles of the show direct the viewer to contemplate the relationship between what we have come to rely on as comforting visually and texturally, and that which is disruptive to our expectations about experience, even to the point of cognitive dissonance. It's not just the superficial sensory "fluff" of confetti set against the usually momentary experience of distress; it's the much more subversive gulf between the sustenance of "honey" and a nagging feeling that these works suggest something that undermines our routines. Those routines are based on a certain amount of waste, which we are in the habit of discarding from view. The difference this exhibit makes is it compels you to look and ponder. (Brian Staker) Elisabeth Higgins O'Connor: Confetti & Distress/Honey & Suspicion @ Mary Dee Elizabeth Shaw Gallery, 3964 Campus Drive, Weber State University, Ogden, through Nov. 21. Weber.edu/DOVA


Aerial Arts of Utah has been putting on fantastic showcases for more than five years, after taking over Revolve Aer­ial Dance in mid-2010. The combined efforts of Deborah Epstein and Annie Kocherhans have helped highlight performers who specialized in aerial fabrics and trapeze shows throughout Salt Lake City—and not just in performing, but teaching techniques to professional and amateur dancers. Their wondrous shows make you wonder just how they achieve such graceful and imaginative displays. Most likely, you've caught their performances at the Utah Arts Festival, as teams of dancers lift themselves 50 feet or more above the ground with little to protect them below. This Friday, the company will take over the Black Box at the Rose Wagner Center for two nights to present its annual main stage performance of Flight of Fancy. Invoking images of costumed carnival performers of old, the group will showcase an array of acrobatic dance, trapeze, lyra (aerial hoop), aerial fabrics and more for 90 minutes. Viewers will be treated to the grace and elegance of watching multiple dancers twist and bend far above the ground with nothing more than a strand of cloth keeping them from falling. Thrill to fantastic poses and pure acrobatic feats from a pair of performers dangling from a ring as well as old-school trapeze work from artists who put their lives into each others' hands to give you a masterful display using little more than a bar hanging from a pair of ropes. (Gavin Sheehan) Aerial Arts of Utah: Flight of Fancy @ Rose Wagner Center, 138 W. 300 South, 801-355-1787, Oct. 9-10, 7:30 p.m., $15-$25. AerialArtsOfUtah.com

Over the course of a nearly 20-year comedy career, Bengt Washburn has had plenty of fun at the expense of his Mormon heritage. On stage, he has described the rules for being a good Mormon as including "no drinking, no smoking, no premarital sex and, of course, the most logical one: No coffee. Because think about it: No drinking, no smoking, no sex ... why stay awake? Why even bother getting out of bed, really?" And more generally: "One person doing something crazy, that's a nut. A bunch of people doing something crazy, that's a religion." Those who have seen Washburn perform locally during previous visits—including his headline sets during the 2013 Utah Arts Festival—will know that his off-kilter sensibility is wonderfully self-deprecating, often focusing on his own relationships and his failure as an ideal physical specimen. And if you can't get enough of him from this week's performance, you can buy his CD Bengt Over In Europe. (Scott Renshaw) Bengt Washburn @ Wiseguys Comedy Club, 269 25th St., Ogden, 801-622-5588, Oct. 9-10, 8 p.m., $12, WiseguysComedy.com

Tosca—the opera by composer Giacomo Puccini and librettists Luigi Illica and Giuseppe Giacosa—has garnered constant popular approval from audiences since its debut in 1900, ranking as one of the five most produced operas of the last decade. This week, Utah Opera brings Tosca to the Capitol Theatre. The storyline follows in familiar operatic footsteps, full of intrigue, jealousy, broken promises and a love triangle. Tosca (Kara Shay Thomson) is our doomed heroine. Her lover, the painter Cavaradossi, meets with trouble when he helps a friend, escaped from prison, by hiding the fugitive in his apartment. The general, Scarpia (Michael Chioldi), who's had his eye on Tosca, arrives on the scene and arrests Cavaradossi. With the lover out of the picture, Scarpia coerces Tosca to reveal the location of the fugitive. The final act, in which Cavaradossi and Tosca briefly reunite, ends in opera's timeless tragic fashion. Though this will be Thomson's Utah Opera debut she is no stranger to Tosca, a role she has performed more than 100 times. But the star of this production might be the scenery. Each of Tosca's three acts takes place at a different iconic location in Rome: the church of Sant' Andrea della Valle, Scarpia's apartment in Palazzo Farnese, and on the battlements of the Castle Sant' Angelo. The painted backdrops and wings—created by the late Italian master designer Ercole Sormani, and on loan from the Seattle Opera—re-create these scenes with astounding effect using little more than perspective and dimensionality to create the illusion of depth. (Katherine Pioli) Utah Opera: Tosca @ Capitol Theatre, 50 W. 200 South, 801-355-2787, Oct. 10, 12, 14, 16, 7:30; Oct. 18, 2 p.m. & 7 p.m.; $18-$89. UtahOpera.org