Aaron Wallis: The Street Bible
Borrowing from the past to illuminate the present is an effective way to address ideas. Revisiting history dynamically helps viewers understand contemporary life and how humanity has evolved. Virginia-native artist Aaron Wallis, now based in Jackson, Wyo., met Mestizo Institute of Culture & Arts curator Renato Olmedo-González by chance, and an exhibition was born. Wallis is aggressive with his compositions, his subjects, and what he is able to say about the relevance of contemporary culture for people of color today. His subjects are popular with minority communities, and, as such, he depicts infamous contemporary figures—"icons"—in his art. Wallis then uses historical motifs and incorporates them into precise screen prints he creates from history. The complete cycle of his current work is called The Street Bible—and it hits home. Most of the historical motifs that surround his figures are medieval Catholic shrines or images from medieval illuminated manuscripts, images more likely to enshroud the Virgin Mary rather than notorious figures. The historical work is extraordinarily refined and detailed, but the "icons" are the focus. Wallis says he is "depicting rappers, drug-dealers and gang leaders in the context of Christian iconography and the illuminated manuscript. These figures, through a process of counterculture deification, have become lionized in a manner similar to Christian saints." He does not indicate if the lionization of these figures in contemporary culture should be perceived as something positive or negative—merely that is primarily a culture's point of view. (Ehren Clark) Aaron Wallis: The Street Bible @ Mestizo Institute of Culture & Arts, 631 W. North Temple, Suite 700, Sept. 14-Oct. 24. MestizoArts.org 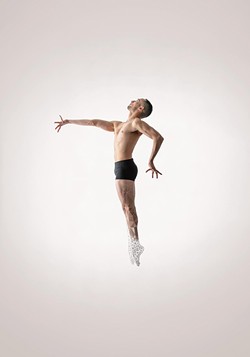 Ririe-Woodbury Dance Co.: Fall Season
Two works of dance—Adam Barruch's "Prima Materia" and RW Artistic Director Daniel Charon's "Together Alone: Part 1"—will have their world premiere this weekend at Ririe-Woodbury Dance Co.'s Fall Season performance. The third piece, Doug Varone and Ellen Bromberg's "States Rendered," rounds out the evening with an audience favorite, back by popular demand. Undoubtedly the most anticipated part of the evening should be Charon's "Together Alone: Part 1," a performance that will offer the audience a rare chance to see the complex and creative mind of the man who molds Ririe-Woodbury from behind the scenes. Inspired, says Charon, by his own life experiences and social observations, "Together Alone" touches on the familiar subject of human relationships evolving in a world that is increasingly experienced and filtered through technology. Charon's narrative runs an emotional gamut from energetic to eerie as his characters evolve from a world of human interaction to one of detachment. "Hopefully," says Charon, "this piece will inspire the audience to think about their own personal interactions and how they deal with technology in their life." Don't be surprised if the conclusion of "Together Alone: Part 1 feels a little unresolved. This is just the beginning of a journey that Charon hopes people will want to continue exploring with him. Part 2 of the piece is scheduled for its world premiere at Ririe-Woodbury's Spring Season performance—and, someday, says Charon, there might be a Part 3 to round out the dance trilogy, giving this choreographer plenty of space to explore a complex societal evolution. (Katherine Pioli) Ririe-Woodbury Dance Co.: Fall Season @ Rose Wagner Center, 138 W. 300 South, 801-355-2787, Sept 17-19, 7:30 p.m., $35-$40. ArtTix.org

Utah Repertory Theater: Amadeus
Those who are familiar with Amadeus exclusively from the 1984 Oscar-winning film version might have very specific expectations for what they're likely to see on stage. And when Utah Rep's production welcomes audience members into the theater by playing the first movement of Mozart's Symphony No. 25 in G minor—which opens the film—it's easy to keep thinking that way. But Peter Shaffer's text is a completely different creation in its current theatrical incarnation, one that brings the audience into the show as the confessors for Antonio Salieri (Roger Dunbar) as he tries to convince us, late in his life circa 1823, how he was responsible for the death of his great musical rival, Wolfgang Amadeus Mozart (Geoffrey Gregory). And while many specific scenes are familiar, the focus shifts to an intimate study of an artist unable to process the idea that genius hasn't been granted to him. Yet, there's still that remarkable character of Salieri, played by Dunbar not just with a ferocious sense of entitlement but with a more operatic villainy. He's on stage for virtually the entire production, commanding attention whether he's raging against the God he deems unjust or playing at humility. Director JC Carter does a fine job of working within the technical limitations of the Sorensen Unity Center space, and Nancy Susan Cannon's costumes provide glorious bursts of color, but Dunbar's performance is the electrifying centerpiece. It's enough to make you forget that somebody else once won an Oscar playing Salieri. (Scott Renshaw) Utah Repertory Theater: Amadeus @ Sorensen Unity Center, 1383 S. 900 West, Sept. 11-26, Friday-Saturday 7:30 p.m.; Sunday, Sept. 20, 3 p.m.; $12-$15. UtahRep.org

Rebecca Klundt: Reformation: A Rearranging of Elements
Rebecca Klundt is fascinated with the impact of the human hand on the physical world in which we live. On the largest scale, that includes mining the earth for raw materials for manufacturing, which is a manner of rearranging the very elements that constitute the Earth. Of necessity, this leaves behind by-products in "piles" of excess materials that are discarded as a part of the process. Klundt's art is an attempt at a redemption of these materials, in the sense of artistic representation. Her works on wood and acrylic appear like aerial photographs of heavily worked farmland or mining districts, with their reordering of physical materials arranged in various geometrical shapes, as you can see in "Summer Day" (pictured). They also aspire to take a place in the order of art history, reminiscent of the geometrical compositions of Paul Klee or Josef Albers, and an entire line of geometric abstractionists to follow. Her works aim for a more organic quality than the typically cerebral examples of the tradition that most often come to mind. The shapes in her works delineate processes of reordering but also imply fissures and fault lines, as well as acts of violence—even while attempting to make the Earth whole again; that's the dilemma of the human footprint. While these works might initially appear like a dispassionate, detached view of the environment, they also point toward an integration of humanity into the natural world, a synthesis that is heartening. (Brian Staker) Rebecca Klundt: Reformation: A Rearranging of Elements @ Alice Gallery, 617 E. South Temple, 801-236-7555, Sept. 18-Nov. 13; Gallery Stroll artist reception, Sept. 18, 6-9 p.m. VisualArts.Utah.Gov 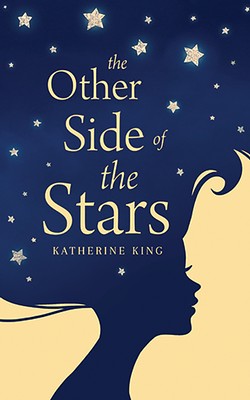 Katherine King: The Other Side of the Stars
Utah native Katherine King's suspenseful, page-turning debut novel, The Other Side of the Stars, can easily be read in a day, but the characters may haunt you for weeks. The Holocaust is a backdrop in King's historical fiction, but that familiar setting never detracts from the originality of the work. The story centers around Gita, a young German immigrant woman in post-World War II America, who unexpectedly finds herself in an arranged marriage following a life-changing tragedy. A complicated relationship grows between Gita and Max, her new husband, as she searches for clues to both her forgotten past and who Max really is. King artfully reveals the pieces of her characters' pasts through alternating perspectives, bringing to light secrets from Gita's childhood and Max's own heroic tale. Ogden's Wisebird Bookery is the perfect host for this indie author book-signing, as it is always buzzing on Saturday mornings with locals hungry for French crêpes, coffee by Grounds for Coffee and a fine book selection. (Deann Armes) Katherine King: The Other Side of the Stars @ Wisebird Bookery, 4850 Harrison Blvd., Ogden, 801-479-8880, Sept. 19, 10 a.m., free. TheWisebirdBookery.Wordpress.com