A theme, a sense of nostalgia, a story, a feeling of adventure: These are the kinds of experiences that artist Dave Newman likes to create for his viewers. For the multimedia artist—who creates canvases from objects he might find on the sides of a road, be they old license plates, photos, packs of Chesterfields, or old postcards—relics of the past are an inspiration. "Matchbook Chief Series" (detail pictured) finds a bold red frame enclosing an iconic Native American chief in profile, with shards of weathered license plates layered like colorful feathers.This multimedia, multi-dimensional piece creates its own history and tradition from the very fragments and traces of the landscape Newman discovered and re-created. Some of the pieces might be read as political (like "Blood Is On Your Hand") while others have a lighter side (such as "At the Rancho"). One noteworthy piece is "Six Gun," with a rifle and a decorated holster placed centrally on a large canvas, surrounded by stars evocative of legendary Old West sheriffs; on the periphery of the abstracted color is a border of copper rivets. Yet, in this vast range of Southwestern Americana, Newman transcends kitsch value, nostalgia or a sense of iconic adventure to convey the spirit of the real world that was at its core.(Ehren Clark) Dave Newman @ Modern West Fine Art, 177 E. 200 South, 801-355-3383, Sept. 19-Oct. 13, free. ModernWestFineArt.com


As the days get shorter and the nights get colder, the Utah Shakespeare Festival moves indoors for its fall season. >Shakespeare's Twelfth Night is a holdover from the summer, and features a plot where a woman dressed as a man who is in love with a man attempts to woo a woman who doesn't know that another man desires her. Spoiler alert: Everybody finds love in the end. Boeing Boeing by Marc Camoletti is a comedy about an American living in Paris who is juggling romances with three different flight attendants of three different nationalities. Spoiler alert: Flight schedules bring all three of them to his place on the same day. Sir Arthur Conan Doyle's Sherlock Holmes: The Final Adventure (pictured) features the world's greatest detective and his sidekick Watson. Spoiler alert: Holmes gathers lots of seemingly obscure clues while Watson asks him about them. (Geoff Griffin) Utah Shakespeare Festival @ Randall L. Jones Theatre, 351 W. Center St., Cedar City, 800-752-9849, Tuesdays-Saturdays 2 p.m. & 7:30 p.m., through Oct. 18, $32-$73. Bard.org

David & Nancy Starks: On the Light Side


Artistic duo David and Nancy Starks take a two-pronged approach to their ingenuous sculptural lighting projects. David is the sculptural side of the team, building heavy-duty structures, while Nancy concentrates on glasswork. No everyday lamps, these works are more akin to illuminated fine art. Though the sculptures do function as lighting, each has a unique aesthetic potential and power. But, Nancy says, “There is nothing serious about them. They are meant to be whimsical and a bit off-center.” “Felix” and “Balance of Power” could not be more different. “Felix” is a restored clown with an illuminated body crafted by Nancy, driving a car constructed by David. Juxtaposed with “Balance of Power”—the structured body created by David balancing Nancy’s Tiffany-style illuminated orb—one finds the magic is in the differences between Nancy and David’s styles. (Ehren Clark)David and Nancy Starks: On the Light Side @ Finch Lane Gallery, 1340 E. 100 South, 801-596-5000, through Sept. 26, free. SLCGov.com/Arts


The setting for modern dance company Two Boots' new work, Dylan Dances, is literally in an alley between an eight-story parking structure and an old single-story brick building. As the sounds of the city filter into the soundtrack of classic Bob Dylan tunes, you can hear the crunch of the gravel on the street under the weight of the dancer's spins and turns. For founders Samantha Matsukawa and Katherine Adler, the artistic freedom of being a relatively new company is a stepping-off point for both choreography and production—in this case, a perfect juxtaposition of Americana and whimsy. The 40-minute work is designed to be more of an open party-like environment, with local musicians busking in the vicinity with their own take on Dylan's classic tunes. And the dance performance itself will take place outside in an informal setting where random passersby can experience something they might not otherwise seek out. Then, of course, there's plenty of fodder to play with when it comes to an iconic figure like Bob Dylan. "By working through the lens of nostalgic elements, we are taking things that have already been done and said time and time again, but rearranging them in ways that shift meanings and distort what you may have understood," Matsukawa says. "It's taking shared experiences ... of Dylan's canon and presenting our version of those words." Adler adds, "Playing with these structures lets us have the freedom to express our own interpretations of either fact or fiction. It's the mystery of the music that reveals our truths." (Jacob Stringer) Two Boots: Dylan Dances @ 252 Edison St., 801-355-2787, Sept. 19-20, 9 p.m., suggested donation $5-$15. TwoBoots.Squarespace.com 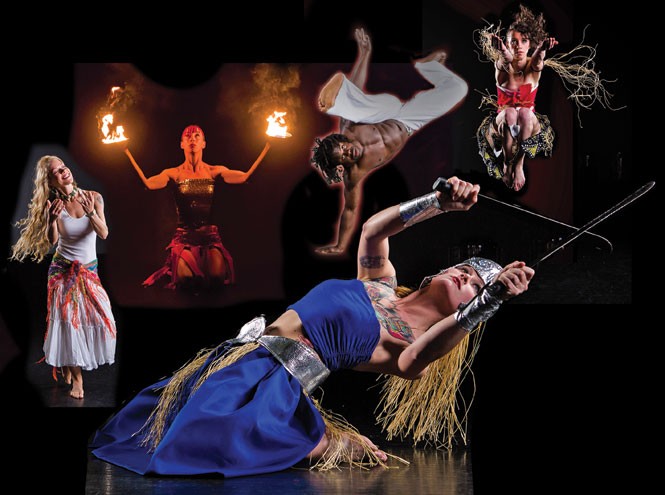 
Brazilian culture returns to the stage this week as Samba Fogo presents Axé, a sampling of traditional movement, original music, storytelling and dance inspired by the diverse and colorful communities and traditions found across the country. Fogo's dancers will perform a frevo-style (from the Portuguese word for "fever" or "to boil") dance from northern Brazil. This showy, fast-moving piece will be paired with a traditional musical complement of trumpet and trombone in a song written by musical director Mason Aeschbacher. Young up-and-coming dancers will also get a moment to shine, as participants from Fogo's summer kids camp make a guest appearance during the Ciranda circle dance. Much of the evening's music will feature original compositions by Brazilian-born, locally based musician George Brown, whose scores cover distinct regional styles including jongo, capoeira, samba reggae and maculelê. Also a form of movement, Brown's maculelê number is accompanied by dancers performing the traditional maculelê stick-fighting game, a rhythmic, semi-improvised movement form developed in Brazil's sugar plantations. Samba Fogo's performers talk a lot about axé (ah-shay), a concept taken from a Yoruba religious greeting meaning "soul" or "good vibration"—the life force inside all of us, our inner potential and our personal power. By naming the fall production Axé, executive and artisitic director Lorin Hansen hopes to encourage Samba Fogo's audience to clap, shout and contribute to the performance's good vibrations.(Katherine Pioli) Samba Fogo: Axé @ Rose Wagner Center, 138 W. 300 South, 801-355-2787, Sept. 19-20, 7 p.m., $12 student, $20 general. ArtTix.org


Imagine Ballet Theatre has enlisted the Ogden Buddhist Taiko Drummers to help with the company’s newest work, Urashima Taro, a ballet based on an old Japanese folk tale. Like many good tales, this story involves talking turtles, the great depths of the sea and a box forbidden to be opened. The narrative begins with Taro saving a young turtle—who happens to be the daughter of the emperor of the sea—from being tortured; in turn, he is given the gift of visiting the underwater kingdom, where he officially meets the beautiful princess. After a short visit, Taro wishes to return to land and receives a gift of the aforementioned magical, forbidden-to-open box. After hopping a ride on another turtle, he returns to his home to find time has passed him by, with disastrous consequences. The driving beat provided by the Taiko drums helps to both propel the tale and ground the work with a cultural foundation, while simultaneously providing a unique thumping rhythm for the choreography. (Jacob Stringer) Imagine Ballet Theatre: Urashima Taro @ Kingsbury Hall, 1395 E. Presidents Circle, University of Utah, 801-581-7100, Sept. 19, 7:30 p.m., $15-$25. KingTix.com


Westminster College's Classical Greek Theater Festival production of Euripides' Hecuba manages to be both a satisfying piece of theater and an informative presentation on the conventions of Greek dramatic literature. The tale of a queen sold into slavery who watches her children die before swearing bloody revenge, Hecuba may be the bleakest of all Greek tragedies, which is quite an achievement. Each performance is preceded by a half hour of remarks by dramaturg James Svendsen, informing the audience how the text highlights the perspectives from which it was written and received in its time. The text—in a new translation by Marianne McDonald—for the most part remains as it was first written in 424 B.C., complete with verbalized interior monologues, specific gestures and other elements that many adaptations avoid in favor of later dramatic traditions that are more familiar to modern audiences. The result is theater more interesting and edifying than it is entertaining, which is not to say that it isn't entertaining; Barbara Smith's direction keeps the energy high throughout, and never steers matters away from the text. But, ultimately, this Hecuba is more in the category of an elaborate and diverting lecture on Classical dramatic tradition in the context of Greek history than it is a production with the sole purpose of entertainment. That it entertains while educating is impressive, and each aspect strengthens the other half. (Danny Bowes) Classical Greek Theatre Festival: Hecuba @ Red Butte Garden Amphitheatre, 300 Wakara Way, 801-585-0556, Sept. 20-21 & 27-28, 9 a.m., $7-$15. WestminsterCollege.edu/greek_theatre


As long as it’s still technically summer, it’s still the season of outdoor fairs and festivals. And while air quality has become a subject of increasing concern for local residents, the second year of the Utah Clean Air Fair is also an occasion to have some fun. The festival originated in an “idea silo” public brainstorming session conducted by the nonprofit community-building organization Revolution United; the project was voted as the most likely to have a positive effect on Utah air quality. The fair includes live music, artist displays and booths, speakers, alternative energy solutions, a parade for children, workshops, family games and activities, prizes and an electric car and bike show. Visitors are encouraged to ride bicycles to the event. The fair has been soliciting ideas to help solve the problem of air quality in our area, and the event will include voting on 20 “idea booths” with various proposals on the subject. It’s a great place to air these ideas. (Brian Staker) Utah Clean Air Fair @ Library Square, 210 E. 400 South, Sept. 20, noon-5 p.m., free. UTCleanAirFair.org

Broadway Across America: Nice Work If You Can Get It


Flapper girls, comedy and great music: Who could ask for anything more from a classic Broadway musical? Nice Work If You Can Get It will be arriving in Salt Lake City as part of a national tour, ready to entertain audiences for eight great shows. The story line of this beloved, Tony Award-winning musical takes place during the Roaring 20s in New York City, and is centered around music created by George and Ira Gershwin and choreography by Kathleen Marshall. Audiences will recognize favorite songs like "Let's Call the Whole Thing Off" and "Someone to Watch Over Me." When the soon-to-be-married wealthy playboy Jimmy Winter meets the fun and charming bootlegger Billie Bendix, the cast of characters are off on a high-speed chase of romance, laughter and fancy footwork. (Aimee Cook O'Brien) Nice Work If You Can Get It @ Capitol Theatre, 50 W. 200 South, 801-355-2787, Sept. 23-28, Tuesday-Thursday 7:30 p.m., Friday 8 p.m., Saturday 2 & 8 p.m., Sunday 1 & 6:30 p.m., $30-$55. ArtTix.org