Salt Lake Comic Con
Salt Lake Comic Con is back this week, claiming to be bigger and better than ever—and based on the guest list and panel schedule, we're ready to agree. The third annual convention will reunite the cast of the Captain America movies, with Chris Evans, Sebastian Stan, Hayley Atwell and Anthony Mackie all slated to attend. SLCC is also bringing in Anthony Daniels, who plays everyone's favorite Star Wars protocol droid, C-3P0. Doctor Who, Star Trek and The Lord of the Rings are all well represented by cast-member guests as well. Perhaps one of the biggest events we wouldn't advise missing is the voice-over stars who will be reading the script from Harry Potter and the Chamber of Secrets as their famous cartoon characters, including the Animaniacs, Ninja Turtles, Looney Tunes and more. Beyond the guests, there are more than 300 hours of panel programming, ranging from cosplay tips to in-depth discussions of nerdy minutia. Between the celebrities, the riveting discussions and the exhibit hall—chock full of artists and writers from near and far hawking their wares—there's no shortage of things to do. Although actors, writers and artists of all stripes will be descending on Salt Lake City for the convention, we locals are the real winners. The convention is easily accessible by Trax, and it welcomes geeks of all levels. (Bryan Young) Salt Lake Comic Con @ Salt Palace Convention Center, 100 S. West Temple, Sept. 24 (1-9 p.m.), Sept. 25 (10 a.m.-8 p.m.) & Sept. 26 (9:30 a.m.-7 p.m.). Visit SaltLakeComicCon.com for panel/guest schedule & ticket pricing.

A Conversation With Michael Lewis
Sports fans in 2015 use a very different vocabulary than they did just 10 years ago, thanks to the advent of advanced analytics. Baseball fans talk about OPS and WAR, basketball fans discuss "use of possession," football fans compare Pythagorean Win totals. Pitcher WHIP numbers, a fixation on corner threes and an app that can tell you whether to go for it on fourth down didn't exist back in the 20th century. For all of this, you can thank Michael Lewis and his 2003 book, Moneyball. The advanced analytics movement was already underway before he came along, but it was Lewis who brought the concepts and lingo to the masses. The book—which later became a 2011 film starring Brad Pitt—became synonymous with new ways of looking at sports, so much so that any team relying on advance analytics is said to be playing "moneyball." Moneyball succeeded because of Lewis' ability to take difficult statistics and concepts and make them digestible for the general public, while still telling interesting stories about unusual people. In recent years, he's taken those same skills and applied them to the financial system with books like The Big Short (2010) and Flash Boys (2014). Whether he talks sports or money, it should be an entertaining evening when Lewis visits Salt Lake City as part of the Sam Rich Lecture Series put on by the University of Utah's Hinckley Institute of Politics. KUER's Doug Fabrizio will conduct the interview. (Geoff Griffin) A Conversation With Michael Lewis @ Abravanel Hall, 123 W. South Temple, 801-355-2787, Sept. 24, 8 p.m., $12-$34. ArtTix.org

Tumbleweeds Film Festival
Let's face it: We don't give our kids enough credit for their ability to handle more than the simplest art directed at them. You only have to look at the kinds of animated films that earn hundreds of millions of dolllars at multiplexes to get a sense that there's only one way to engage a young audience. The Utah Film Center's Tumbleweeds Film Festival has spent five years trying to shake the foundations of those assumptions. For three days, the festival programs family-friendly features and short films that aren't merely brightly colored, fast-moving computer animation, but also live-action films, documentaries (gasp!), films from other countries (gasp!!) and even films with subtitles (gasp!!!). It's a festival built on the idea that, given the chance, kids' sense of what makes satisfying films are more diverse than we might believe. This year's lineup includes shorts and features from Australia, Germany, England, Spain and India, plus a documentary about a Ugandan Little League baseball team attempting to qualify for the Little League World Series. A centerpiece screening also celebrates the 30th anniversary of The Goonies (John Matuszak, as Sloth, pictured) with a 35 mm presentation. And beyond the films, there are workshops on panel discussions about film-related topics, including how to make eye-catching YouTube videos. There's even a Kids' Clubhouse with activities to let kids burn off some energy between films. It's a weekend at the movies that will leave children with a broader sense of what a weekend at the movies can be. (Scott Renshaw) Tumbleweeds Film Festival @ Rose Wagner Center, 138 W. 300 South, 801-746-7000, Sept. 25-27, $6 per screening; $40 for 10-screening passes; $20 workshop registration. Check out the full schedule at UtahFilmCenter.org/twds2015

Gabriel Iglesias
Like many comedians, Gabriel Iglesias started out taking the easy route: jokes about his Latino heritage and his plus-size figure (including his self-administered nickname "Fluffy") or funny voices. But somewhere along the line during a career that has spanned almost two decades, something changed. Well, not entirely: The 39-year-old Southern California native still pokes fun at ethnic stereotypes. He still talks about his struggles with his weight. And he still loves trotting out a silly voice when the situation seems appropriate. But as Iglesias made the shift from clubs to arenas, he actually developed a more intimate relationship with his audience. No longer content to be simply a deliverer of punch lines, Iglesias became a tremendous storyteller, opening up his life to viewers in a way that's more characteristic of great essayists than standup comedians. In his 2013 concert film The Fluffy Movie, he shared the story of his first meeting with his absentee father in 30 years—a tale that was funny, poignant and startlingly honest, especially when juxtaposed with equally soul-baring stories about his attempt to build a relationship with his teenage stepson. And that's why catching Gabriel Iglesias in a venue like the Maverik Center may feel less like a rock concert than an evening sitting at the bar catching up with an old friend. He can hit you with a laugh, and then hit you with genuine emotion. That's what happens when an entertainer only wants to get real with you. (Scott Renshaw) Gabriel Iglesias @ Maverik Center, 3200 S. Decker Lake Drive, West Valley City, 801-988-8800, Sept. 26, 7:30 p.m., $45-$124, MaverikCenter.com 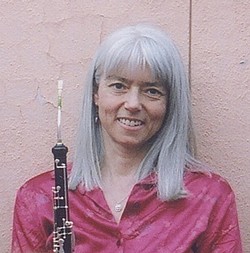 Salt Lake Symphony: The Brahma Viharas
There are plenty of romantic gestures one could make to recognize a life partner's birthday. Phillip Bimstein kicked things up a notch. In honor of the 60th birthday of his partner, Charlotte Bell (pictured), Bimstein wrote a concerto, to be premiered by the Salt Lake Symphony. The Brahma Viharas takes its name from four Buddhist contemplative practices employed in yoga, intended to cultivate the virtues of loving kindness, compassion, empathetic joy and equanimity; Bimstein and Bell are both longtime yoga practitioners. The four movements offer musical expressions of those four practices. Bell will perform the solo part for English horn. Bimstein and Lama Thupten Dorje Gyaltsen will lecture on the themes before the concert, at 6:15 p.m. The program also features Grieg's Peer Gynt Suite No. 1 and Strauss' Death and Transfiguration. Happy birthday, Charlotte. (Scott Renshaw) Salt Lake Symphony: The Brahma Viharas @ Libby Gardner Hall, 1375 E. Presidents Circle, University of Utah, 801-531-7501, Sept. 26, 7:30 p.m., $5-$10. SaltLakeSymphony.org