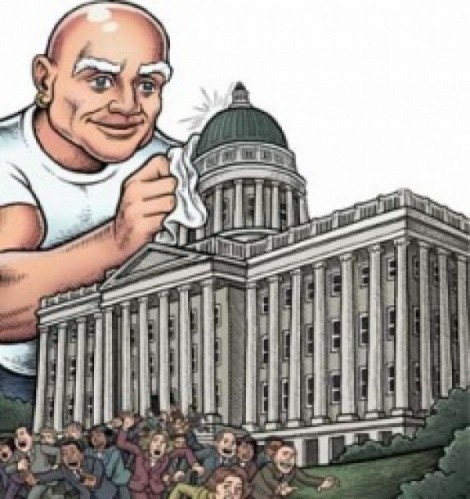 In the last legislative session the metaphor du jour for the newly created Ethics Committee was talking about ethics reform like a football game. The committee proposed legislation, talked reform, and congratulated each other for “moving the ball down the field.” But with one major reform still left on the public’s ethics to-do-list—an independent ethics commission meant to field complaints against legislators—the watchword now is “crunch time.”

Committee members resolved Wednesday that before the start of the 2010 legislative session they will have a committee bill creating an independent commission. But how it will be formed, and how “independent” it will be, will depend on decisions made during the next two Interim meetings.

Two draft ideas were floated by Rep. Kevin Garn, R-Layton, and Sen. Scott McCoy, D-Salt Lake City. While in simple terms an independent commission invokes the idea of not allowing the fox to guard the henhouse, both proposals recommended having some kind of independent body only look at half of a disciplinary hearing into a legislator’s conduct—the initial proceedings where evidence of wrong-doing is fleshed out behind closed doors.

McCoy, who plans to present a complete draft proposal in the October meeting, envisions a panel of legislative staff that could vet allegations of legislative misconduct, to see if they have merit before the complaints might make it to a public disciplinary hearing before the Ethics Committee.

“They would not be appointed by the executive branch but wholly by the legislative,” McCoy says. “They would be independent of members of the Legislature.”

Garn’s proposal, which he conceded was a “starting point” to the discussion of an independent commission, would be a panel comprised of five individuals: three former judges and two former legislators, one a Democrat and the other a Republican. Garn also suggested scrapping the current requirement that ethics complaints require three individuals to back them up before they are considered and allowing complaints to be brought by just one individual.

McCoy upped the ante on that front by recommending that public citizens could bring complaints against legislators to the panel. This proposal struck a nerve with committee members, however.

While both proposals called for an independent panel that could vet complaints in a confidential setting before they were subject to a public process, committee members worried that members of the public would not have anything to keep them from filing an ethics complaint and then immediately holding a press conference on the steps of the Capitol announcing their unvetted claims.

Rep. Brad Last, R-St. George, expressed the greatest reservations about the presumptive panel’s screening process, calling the idea of allowing for public complaints "extremely dangerous" and also disagreeing with changing the requirement to allow just one individual legislator to bring a complaint.

McCoy, however, argued that the threat of a complaint making it to the public is present even in the current system. In fact, that is exactly what happened when an ethics complaint was leveled in 2008 against Rep. Greg Hughes, R-Draper, who was alleged to have offered a bribe to a former lawmaker to change a critical vote on the school vouchers issue. In that case, the complaint was leaked to the media before the hearing by Rep. Phil Riesen, D-Salt Lake County. Hughes was eventually cleared of most of the charges by the commission.

“The real important thing is the screening process,” McCoy says, arguing that a fair body should be allowed to vet complaints “to see if there is fire where there is smoke, and I think we can open that process to the public.”

Rep. Brian King, D-Salt Lake City, agreed with McCoy’s thought on involving the public but made the point that former judges, as recommended by Garn, would likely best filter out bogus complaints. “I think they have a lot of experience doing the exact thing we’re talking about—being a filter for what are meritorious complaints and what are not.”

The public aspect of the panel, while contentious, would only apply to the evidentiary portion of an ethics hearing. Anything that moved from that process to a public discipline hearing would still go before the Ethics Committee and may still even require a vote from the House and Senate. Still, the idea of finding a way to field complaints directly from the public seemed to gain traction when Sen. Sheldon Killpack, R-Syracuse, who first raised doubts about how a citizen complaint would remain confidential while the merits of it were investigated, later agreed the system could weed out purely political or baseless claims.

“Maybe I’m just an eternal optimist, but I just think it will all level out," he says.