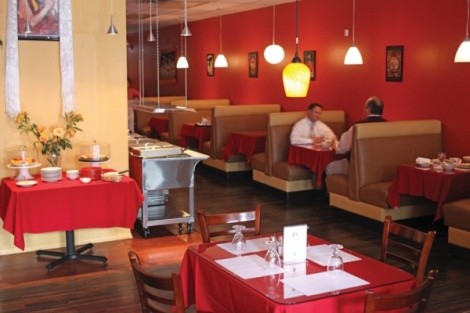 You know how there are just certain places you root for? You want them to succeed, sometimes in spite of themselves? Well, I’ve been cheering for Everest Nuage (New Age, get it?) Tibetan Restaurant ever since it opened over a year ago in a seemingly cursed 200 South location, most recently occupied by Bevalo coffee shop. It’s the small, independent, mom & pop sort of establishment that you almost will to be wonderful. Except, it isn’t.

They say you only have one chance to make a first impression. In the case of restaurants, that first impression happens when you initially enter the establishment. At Everest, that involves—on my visits, anyway—hanging around the front desk until the host, who also seems to function as the only server and the cashier, realizes he has a customer and emerges from either the back room or kitchen. Once your party is seated, he again disappears. This happens throughout the dining experience, despite an obvious lack of fellow diners. On my first visit, at dinner, I had to track him down in the kitchen to ask for silverware. “Do you want chopsticks or a fork?” he asked. “Can I have both?” I meekly inquired. He brought both, with no apology for having forgotten them in the first place.

At lunch recently, the server was so geared toward selling us on the $8.99 all-you-can-eat buffet, we had to almost plead to see the menu. I wanted to try the buffet, but my wife had seafood in mind. “Can we see the menu?” she asked. “Pretty much everything we serve is available at the buffet,” said the server. “What about the salmon?” she asked. “No, that’s not part of the buffet.” As it turns out, there were no seafood dishes at the buffet, nor were any of the teppanyaki specialties listed on the menu, such as hibachi steak, filet mignon, tuna steak, yakisoba, hibachi Chateaubriand and so on. Here’s a service tip that I think applies to any restaurant: When a customer wants to order a menu item that is twice the price of the all-inclusive buffet, let her do it.

Finally, we were given menus, and then our server vanished. Well, he didn’t vanish, exactly; he was at the front desk staring at a computer screen. He couldn’t have been organizing the day’s reservations, since on our visits we’ve been the only customers, or close to it. In this case, we were the only people in the restaurant, and yet, we still had to beckon the server over to place our order, after a lengthy wait.

So, the wife ordered the hibachi salmon steak ($15.50), which comes with a bowl of thin, nearly flavorless onion soup and a salad that the server composed from the buffet—and, to our amazement, it was good (the salmon, that is). In fact, it was really good: grilled just beyond medium, moist and flaky, served with a subtle ginger-soy dipping sauce and sautéed veggies on the side. The reason we were so surprised that the salmon was excellent is that, sadly, almost nothing else at Everest was.

The menu combines Tibetan dishes like she-thuk noodles, curry offerings and a selection of Japanese teppanyaki fare, which seems odd until you learn that the chef came from Benihana. Perhaps he should have opened a dedicated teppanyaki eatery, since dishes from that side of the menu hold more appeal than the Tibetan-Indian cuisine.

At restaurants like Himalayan Kitchen and Kathmandu, Salt Lakers have learned to love momos. And I like the momos at Everest, although it’s hard to explain why. I think it’s the dough. The beef momos are thick, doughy dumplings, similar to potstickers, stuffed with ground beef that doesn’t really taste like it was seasoned with anything. And yet, once adorned with dipping sauce, they take on some life. I asked our server about the sauce, which looked like fry sauce and he said, “It’s chili dipping sauce.” Duh. The veggie momos though, stuffed with potato and carrot, give new meaning to the word bland. But, that’s sort of this restaurant’s signature.

I have never encountered so many insipid dishes in an ethnic restaurant. Everest tofu ($7.90), described as “spicy,” is anything but—cubes of tofu sautéed with what tasted like mild chili-garlic sauce from a jar, cooked with scallions, but disappointingly bland. Ditto the “spicy” potatoes. Curry beef ($9.75) was slightly tough chunks of beef served in light brown gravy that was closer to soup than sauce, thin and without much flavor. Chicken curry ($8.99) here is much the same: no hint of garam masala, coconut, cinnamon, chili pepper, tumeric or any of the other ingredients that often go into curries.

Cholay ($7.75) is a vegetarian-friendly dish of garbanzo beans—canned, I think—supposedly cooked with onion, garlic, ginger, tomatoes and spices. The menu describes the cholay sauce as “mild,” which it certainly was. Again, I found myself reaching for salt and pepper. At the lunch buffet, I did find one offering that was bright with flavor: dal. It’s a thick soup made with lentils, and I could actually taste hints of cumin, garlic and onion. Even thin, French-style green beans, cooked in garlic-ginger sauce, were almost flavor-free.

Desserts from the buffet—with the exception of fresh orange sections, strawberries and homemade yogurt—seemed to have come from Costco: cheesecake, nut-sprinkled chocolate tortes and such. There are a handful of wines available, but nothing you’d really enjoy drinking, so stick with beer, soda, tea or lassi drinks.

Everest has a lot of eye appeal; it’s a very attractive, lovingly decorated restaurant. Oh, if only the food and service were on a par with the inviting ambiance.