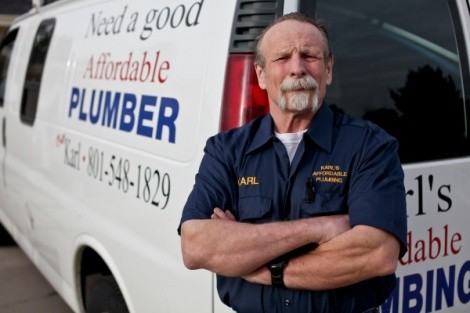 Karl “Willy” Winsness had a lot to think about during his 17 years in the Utah State Prison. One thought was why, as he alleges, the Salt Lake County Sheriff’s officers who raided his Rose Park apartment with a “no-knock” warrant didn’t identify themselves as law enforcement before they kicked his door down and he ended up shooting one officer through the arm. The officer lived and Winsness got five years to life. While Winsness worked on a legal defense to exonerate himself, he also dreamed that a monetary award might someday be available to provide a scholarship for children of inmates who lacked a mom or dad to help support them—a pain Winsness knew firsthand, being unable to support his two daughters while he was incarcerated.

While Winsness still feels angry about his incarceration, when he left prison in 2004, reclaiming his innocence was less a priority than was setting up the scholarship program.

“People get out and feel sorry for themselves and get straight onto some government program or fall back into destructive behaviors,” Winsness says. He chose to get his plumber’s license back, start his own business and then go to work pitching a scholarship program. “This is a little bit of healing for me, a better way to vent my anger.”

Because Winsness, 60, spent almost a third of his life behind bars, his two daughters spent most of their lives without their father. Now back on his feet, Winsness, after much searching, found the Granite Education Foundation, a nonprofit run by the Granite School District, to administer the scholarship program, which could begin distributing scholarships next year.

Winsness sees the program not only as a way to break the cycle of generational incarceration by encouraging children of imprisoned parents to choose college over the examples of their parents, but also as a way to give inmates an opportunity to participate, as he hopes funds could be collected even from inmates.

“It would be great PR for them,” Winsness says, “a way to give back.”

Incarceration, it seems, is a reality of American life. According to a 2010 Pew Charitable Trust study, there are approximately 2.3 million Americans incarcerated nationwide. While such numbers are staggering, the report finds the effects ripple in waves to the families of the incarcerated—especially since the earning potential of released inmates is reduced by 40 percent on average because of their incarceration.

“This is a growing challenge now that 1 in every 28%uFFFDchildren in America has a parent behind bars, up from 1 in 125 just 25 years ago,” reads the report. The report goes on to show that the economic toll on children can be devastating, especially with more than half of imprisoned parents—52 percent of mothers and 54 percent of fathers—being the primary breadwinners. The report highlights research that found that in “the period that the father was behind bars, the average child’s family income fell 22 percent compared with that of the year preceding the father’s incarceration.”

Winsness knows how much more is lost than just time.

“In my case, I lost a brother, and my father died before I got out. I lost the house I was buying and a car, truck and motorcycle that were paid for. I really couldn’t help much with my daughters,” Winsness writes via e-mail.

Winsness says he had already wasted much of his life on drugs and alcohol in 1988 at the time of the fateful raid by Salt Lake County Sheriffs. When several sheriff’s officers failed to break through his door, Winsness fired a gun through the door at the unseen officers, whom he alleged never identified themselves.

Regardless of how he got into prison, however, the sobering reality of how his lifestyle led him to prison and had affected his daughters was what motivated him to pursue the creation of the scholarship program.

“[My daughters] shouldn’t be punished for my mistakes,” he says.

After Winsness was released in 2004 and completed parole, he worked as a plumber until he was laid off during the recession. Having now started his own business, he’s decided that the scholarship shouldn’t take a back seat to any legal effort he would mount in regard to his incarceration.

Finding a partner to manage the scholarship and raise funds, however, wasn’t an easy task. Winsness approached universities, colleges, his credit union and others. Eventually he found a partner in the Granite Education Foundation. With the help of his legislator, Rep. Larry Wiley, D-Salt Lake City, Winsness helped bring the Utah Department of Corrections and Granite Education Foundation together to hear his pitch.

“He contacted us because he needed a 501(c)(3) [nonprofit],” says Scott Whipple, executive director of the Granite Education Foundation. “He contacted a lot of people, but they weren’t buying it. We’ve been doing scholarships with local universities for the last 15 to 20 years. We knew how to do it. We have a lot of kids with needs, and his scholarship fits in that category, certainly.”

Whipple expects his foundation will raise funds for the scholarship and hopefully begin distributing a number of $1,000 scholarships beginning in the fall or early 2012. Corrections has agreed to allow the foundation to post flyers in the visitors’ waiting area of Utah prisons to spread the word among families of inmates about the need-based scholarship. Winsness says Corrections had concerns at first based on safety and security but recognized the good the scholarships could do.

While Winsness hopes to hold an annual fundraiser run for the scholarship, he’s also determined to see that inmates themselves contribute whatever they can. He hopes ultimately that the scholarships will give incarcerated parents a new perspective on opportunities their children might have.

“Inmates who have kids who are getting scholarships will be more likely to donate,” Winsness says. “They’ll be more likely not to ask their kids who’s banging in the neighborhood, but ask them ‘What are your grades? How are you doing in school?’ That’s one of the things that’s going to get kids going to college earlier on.”%uFFFD