Excellence in the Community 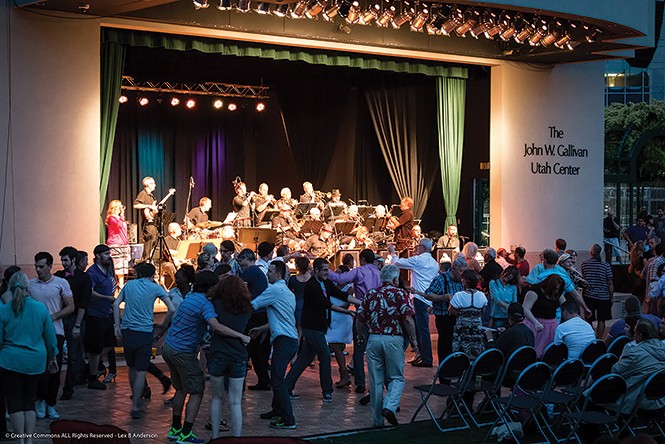 "Take the diamonds out of the sock drawer, put the jewels into the light where people can see them, and downtown will sparkle," says Jeff Whiteley.

Whiteley and his wife, Melinda, started as street musicians in Paris. "My wife's voice would stop traffic," Whiteley says. "I thought, watching the effect her voice had on the French people, we could make something happen with music." The couple liked Utah, and wanted to bring to the state the same musical vibrancy they experienced abroad. However, in the early 2000s, they observed that, "generally as Utah musicians, you played in the background, things like parties, weddings and restaurants."

Whiteley believed this was detrimental for the community. "There is a very civilizing effect when people come together and focus on the thousands of hours of practice that have gone on before the performance," says Whiteley, "They share an experience. ... Human achievement brings our community together. If no one cares about that, I think our city is diminished."

He determined to find "cool venues" downtown where local artists could perform and founded Excellence in the Community in 2005. At first, facing skepticism from potential sponsors, Whiteley and his team "wandered from venue to venue." "Oftentimes, the tone of the meeting is, 'Who let you in here?' " says Whiteley.

Salt Lake City Mayor Ralph Becker, however, supported Excellence in the Community's philosophy, and the organization has found an ideal venue in the city-owned Gallivan Center. Whiteley works with Talitha Day, Program Director of the Gallivan Center, to put on Big Band Swing Dancing Nights and Thursday night concerts.

On Tuesday nights at the Gallivan, swing dancers enjoy a live band and an open dance floor. University of Utah student Alyssa Bertelson has attended this event on multiple occasions. "This is my favorite night of the week," she says. "You can invite people because it's free, and it's great to have exposure to the classics in music." The Tuesday night concerts will move to Thursday beginning in September.

Katherine Potter, senior advisor to Becker, explains that arts and culture are large parts of Becker's "livability" agenda. "Jeff Whiteley has done an incredible job of bringing community groups of an amazing quality and caliber to the public," she says.

Excellence in the Community receives funding for its events through a combination of sponsorships and grants, including one from the Utah Division of Arts and Museums (UDAM) to put on a Mondays in the Park concert series at Liberty Park. Jason Bowcutt, who handles community and performance art at the UDAM, says, "What Jeff does is a really valuable service for the state. We have all of these terrifically talented people that live in Utah, and there aren't always opportunities for them to be seen. He provides these opportunities."

Whiteley is grateful to his "Excellence team" and the supporters he has, but would still like more local leaders to "just come and see" what Excellence in the Community is doing. Meanwhile, Whiteley will continue to bring as many local diamonds out of Utah's sock drawer as possible. "I'm just a guitar player with an idea," he says. "I'm aware of all the talent here and the potential that talent represents when it is properly presented to the public."