Kenvin: An Artist's Kitchen, With a Measure of Grace 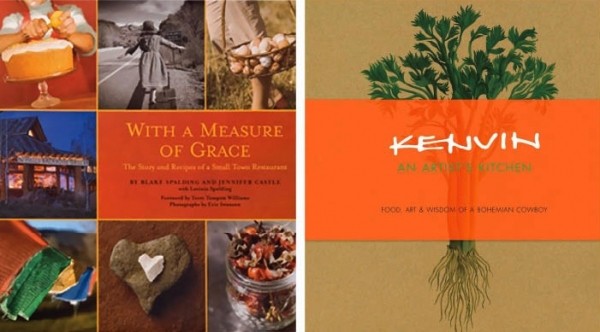 Cookbooks, sadly, are far too commonplace nowadays. For every Mastering the Art of French Cooking by Julia Child, there are a dozen Rachael Ray cookbooks. That’s why I was so pleased to recently encounter two of the best cookbooks I’ve ever laid eyes on, bar none. And they were created by Utahns. In fact, to call Kenvin: An Artist’s Kitchen and With a Measure of Grace merely “cookbooks” is to do them great injustice. Sure, there are recipes, technique tips and food photos contained within, but there is so much more. These are lovingly produced books that you’ll want to pass down to your grandkids.

When artist, musician, chef, writer, farmer, bohemian and Renaissance man Kenvin Lyman passed away unexpectedly in February 2011 from injuries resulting from a fall, he left a big hole in the hearts of everyone who knew him—and there were multitudes. The Avenues house he shared with his soulmate and wife, Sofia Angkasa, was a gathering place for the throngs of folks they knew as friends, which pretty much included anyone who wished to walk through their always-open door. Naturally, the focal point of the house was the kitchen, where miracles occurred regularly. Lyman wasn’t a “trained” chef, although he admired greats like Alice Waters, Jeremiah Tower, Thomas Keller, Charlie Trotter and others. But, man, could that guy cook.

Kenvin: An Artist’s Kitchen was born back in 1998, when Lyman’s mom asked him to write down recipes he’d created over the years. “A simple request I assumed I could knock out in a few hours,” Lyman wrote. Well, over a decade later—and with the help of many friends, local food writers, stylists and such—Lyman’s book has been posthumously published, and it’s brimming with the sort of love and creativity that he spread around so generously. We have art of his hanging on our walls at home, and I’m still embarrassed at how little he charged for it.

Lyman’s coffee-table book is spiked with his art, recipes and accounts of his life in the kitchen, on ranches and farms, and even as the designer of rock-show posters, including some for Led Zeppelin. There is much wisdom in this fine publication, such as the quote that opens his chapter on butter: “Good butter begins in the pasture.” For those who knew Lyman, there are many, many photos—some of which, like the one of him and late chef Robert Barker, might bring a tear to your eye.

But let’s not get too maudlin, because Kenvin: An Artist’s Kitchen is a celebration, not a wake. Along with practical recipes—I can’t wait to make some of his chile oils—there’s practical politics and practical life lessons and so much more. As Lyman’s wife said, this book is a “manifesto” as much about how to live and love as it is a cookbook. And, despite its heft, it’s a book to take to bed with you. It’s one of the finest “cookbooks” I’ve ever enjoyed.

I can honestly say the same for With A Measure of Grace: The Story and Recipes of a Small Town Restaurant, written by Blake Spalding and Jennifer Castle of Hell’s Backbone Grill in Boulder. This isn’t a new book—although it’s new to me—but definitely worth tracking down. I suggest driving down to Hell’s Backbone Grill, enjoying a marvelous meal and picking up a copy to bring home. By the way, Spalding and Castle are currently working on a new book.

With a Measure of Grace begins with a wonderful foreword by Terry Tempest Williams, where she recounts early visits to the very conservative village of Boulder, followed by more recent trips there and her discovery of Boulder Mountain Lodge and Hell’s Backbone Grill. Williams writes this about the restaurant: “The Buddha says breathing is a ‘quivering intake of life.’ At Hell’s Backbone Grill, so is eating.”

This book is, in part, the fascinating history of one restaurant, beginning with the genesis of Hell’s Backbone Grill, when Spalding and Castle moved from Flagstaff, Ariz., to Boulder in 2000. Realizing they’d need a liquor license in order to make their restaurant work financially, they engaged the largely Mormon community in a neighborly fashion and eventually were granted their license. “Nobody ever talked to us like this before; they only yelled,” said an LDS councilman, commenting on Castle and Spalding’s “calm, thoughtful approach.” Those are good words to describe the entirety of this terrific work: calm and thoughtful. There’s a Buddhist backbone running through its spine.

It’s studded with intelligent essays like “Considering Meat: Compassionate Consumption,” and profiles of fascinating folks like local forager Breck Crystal and formidable tortilla maker Gloria “Hallelujah.” Spalding and Castle are great at writing lovingly about something as simple as sea salt. And there’s even a “Top-Twentyish Playlist” of tunes that help set Hell’s Backbone’s moods. (Note: Time to include Josh Ritter!)

But at its heart are recipes. Wonderful, innovative, I-can’t-wait-to-cook-this recipes. They range from the Zen simplicity of Tibetan butter tea to Jen’s Christmas Posole, which I can’t get enough of. Southwest spices flavor much of the proceedings. There is Moqui Mac, a zesty mac & cheese made with poblano, roasted red and jalapeño peppers; there’s a tongue-scorching She-Devil (Diabla!) sauce that’s as addictive as crack; and a killer recipe for green-chile corn tamales. All of it gorgeously illustrated by Santa Fe-based photographer Eric Swanson.

Before you know it, we’ll be racking our brains thinking of holiday gifts to give our loved ones. These two books—brimming with love, compassion and soul—would be ideal.