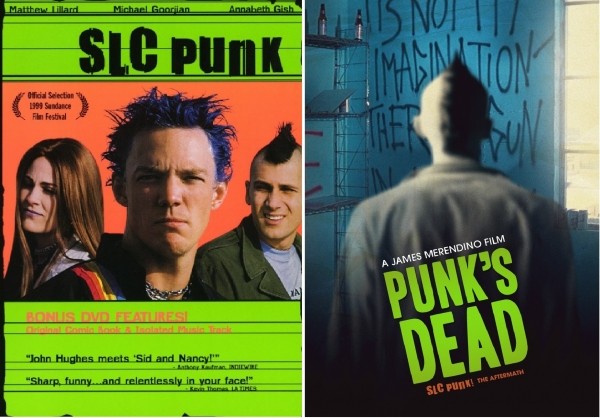 Since he first announced a sequel to the cult-classic SLC Punk this summer, director James Merendino has maintained that the film’s followup, SLC Punk 2: Punk’s Dead, will not, by any means, be filmed in Salt Lake City. But after receiving tremendous Utah support for the film, Merendino has changed his mind, and has recently decided to shoot the film’s sequel entirely in and around Salt Lake City.

“I was talking to some people there, and after reading your article, it kind of got me nostalgic about shooting again in Salt Lake City,” he added, referring to City Weekly’s Sept. 19 story “SLC Punk Is Not Dead,” which discussed the film’s impact on the city and was paired with before & after shots of iconic shooting locations.

Since the article’s release, the director and former Beehive State resident has, he says, experienced an outpouring of support from friends and fans based in Utah, especially from Rancid drummer Branden Steineckert, who currently lives in Orem and is now the film’s executive co-producer.

“We met up in New York after a punk show, and Brandon read the script and just assumed it was going to be shot in Salt Lake,” Merendino says. “He didn’t know I was planning to film in New Orleans. He just said, ‘It would be great to go back and show what Salt Lake looked like after the Olympics.’ So, he started talking about the film and getting excited about it, and I didn’t have the heart to say, ‘Dude, I’m probably going to fake all that in New Orleans.’ ”

Up until a few weeks ago, Merendino still planned to shoot the film in Louisiana to take advantage of a tax credit. But after he launched an Indiegogo crowd-funding campaign in October, the director had a change of heart when he noticed many of the campaign’s donations were coming from Utah.

“I feel like the life of the movie is the city,” Merendino says. “And, you know, ever since I started doing this Indiegogo campaign, I’m finding that a lot of the support is coming from Salt Lake because there’s things that are being given away like being an extra or a speaking role. I noticed those bids were coming from people that live in Salt Lake, that want to be a part of the movie.”

As of press time, the film’s Indiegogo campaign has reached only $20,000 of the $250,000 goal. But Merendino says the film will begin filming in the spring of 2014, no matter what. “I know my fans don’t have a lot of money, and I’m impressed that anyone gave me anything at all for this,” he says. “The [campaign] money is going toward making SLC Punk 2 a better movie, but I’m not Zach Braff. I don’t have a million fans with thousands of dollars to spend. So, my main income is coming from somewhere else. This is just a way to bring buzz and anticipation to the film.”

Though the sequel being shot in Salt Lake City is good news for fans, it also equals opportunity for the local film industry. In 1998, Merendino hired roughly 25 local actors to be in SLC Punk, and he plans on doing the same for SLC Punk 2: Punk’s Dead.

“If the movie is going to have scenes in Salt Lake City, then I might as well employ people from Salt Lake City who are excited to work on it, rather than people from Louisiana who’ll just look at the film as a job,” he says. “Plus, there’s going to be a concert scene, so we’ll definitely need people to be in the audience for that.”

According to Merendino, most of the original cast is returning (minus Jason Segel), and the film will revolve around a new character: the offspring of Heroin Bob and Trish. But that’s about all he’ll give up. “It’s about him interacting in this world with a much sharper point of view than even Stevo,” Merendino says. “He’s sort of a goth kid. He’s not mired by having to say he’s a punk rocker. I don’t know what else to say. I could give away more spoilers but then who’s gonna want to see the movie?”