Exodus: Gods & Kings fails when it tries to humanize its spectacle 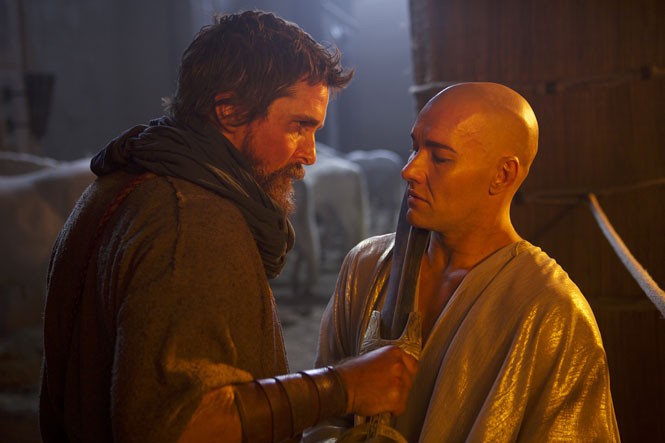 It's ... big. Whatever else you might want to say about Ridley Scott's Exodus: Gods & Kings, you can't deny that it's big. Big scale on the CGI-enhanced sets, big crowd scenes, big plagues, big acting—they're all here. Pull out your thesaurus and substitute every synonym for "big" that you can find—vast, immense, colossal, jumbo—and they will all apply.

Except for God. The Lord Jehovah is represented in this movie as a child. But we'll get to that.

Hollywood cinema in the early 21st century is a parade of attempts by movies to top the big-ness of the movie that came before. Every superhero movie has its city-leveling apocalyptic battle; every blockbuster needs its IMAX-sized set pieces. An industry desperately looking to get butts in seats keeps turning to sheer enormity as a way to counteract the universe of things people can watch any time they want on small screens—and, just as happened in the 1950s, when Hollywood was battling the rise of television, that means turning to Biblical epics.

Here, Scott and his team of writers have turned to the story of Moses (Christian Bale) and Rhamses (Joel Edgerton), raised as brothers in the palace of Egypt's pharaoh, until Moses learns that he was actually born of the Hebrews who serve as Egypt's slaves and becomes their leader in their fight for freedom. But the film also turns back to the grand tradition of films like The Ten Commandments in its hilariously oblivious casting decisions. Controversy has already swirled around the casting of Bale as Moses and the paucity of Middle-Eastern actors among the film's "Egyptians," but it's also hard to deny the high comedy of John Turturro as the pharaoh Seti, or Ben Mendelsohn going full leering effeminate as the corrupt Egyptian viceroy.

It's even harder to deny that Scott—who honed his period-epic chops on Gladiator and Kingdom of Heaven—knows how to deliver spectacle, if spectacle is what you came for. The pyramid & statue-studded cityscapes of the Egyptian capital of Memphis are as impressive in their above-ground scale as the slave quarry at Pithom is impressive in its below-ground scale; the opening battle between Egyptian forces and the Hittites manages some effectively controlled wartime chaos. The landslide along a mountain path that wipes out many of Rhamses' troops feels genuinely catastrophic, and the wave that returns the water to the parted Red Sea ... well, it's big. Really, really big.

What's odd about Exodus: Gods & Kings is that even as it's pulling out all the stops for visual grandeur, it's trying desperately to provide a humanized, naturalistic approach to the story's mythological characters and supernatural events. The Nile runs with blood, this version is careful to explain, merely as the result of a crocodile feeding frenzy gone haywire, and the flies come because, well, what do you expect with all those dead fish and frogs, and thence the diseased livestock, and so forth. Meanwhile, Rhamses alternates between vaguely petulant jealousy at the preference shown to his adopted brother Moses, and doting father to his infant son, with Edgerton seeming truly baffled as to how to play him. And Bale seems even more confused in his swings between nobleman, courtly wooer of his wife Séfora (María Valverde) and tormented leader who somehow develops the accent of an old Jewish man from Brooklyn during the film's second half. The narrow line between prophet and lunatic walked by Russell Crowe in Noah looks all the more impressive by comparison.

But Exodus' uneasy mix of the majestic and the mundane feels most uneasy in the scenes where Moses communicates with a Yahweh who has taken the form of a preternaturally serene young boy. It is here that we're supposed to get a sense of the meaning of "Israelite" clarified by Moses in an earlier scene as "one who wrestles with God," providing a sense of the Chosen People's personal relationship with awesome power. Yet every time Exodus tries to shrink anything down to a more human size, it just feels silly. These filmmakers don't seem to realize they've only really got awesomeness going for them. If they weren't going to go all-in on going big, they might as well have gone home.