Expanding on the Social 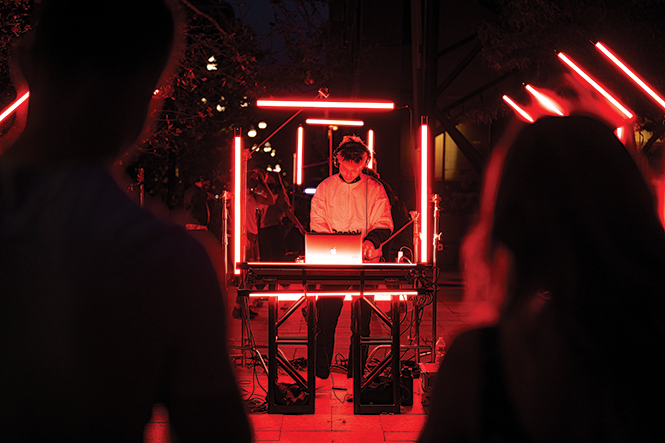 Ten months ago, in April 2020, Norbert Bueno was busy starting a brand-new musical endeavor in the face of the pandemic. "It will take some time before people feel comfortable going out to large gatherings," he said at the time. "New ideas and forms of entertainment will rise."

And rise they have. Social Antidote has, over the past year, grown a musical model that not only offers high-quality production opportunities to local artists, but expands on the very limits of visual production.

Bueno and his fellow Social Antidote collaborators—Vice President Brianna Ray, Secretary and Treasurer Mychael Johnson, and Fat Fish Media friends Molly Cook and Isaac Gonzales—wanted a way to still give a stage to their folks in the music scene, safely. And so what started out as well-lit, well-produced live stream sets of local artists put together by the budding Social Antidote has since become something much more expansive, transforming the group into a creative force all their own.

"I think one of the biggest things that I've learned from this is that it's a whole new way to experience things—everything, not just music," says Bueno about Social Antidote's developments in both live stream, pre-recorded and experimental pandemic live sets—which the production team is super, super COVID-conscious and guideline-conscious about producing. "As far as live streams and Social Antidote, what we're trying to do is to continue showcasing talented local creatives in cool hybrid ways," he says.

After Mychael Johnson approached The Blocks SLC and Downtown SLC Alliance as a potential funding stream for the then-unfunded project, he says, "It led to them wanting us to collaborate with events they were putting on, really giving us more creative production control with what was going on."

And it's led them closer to crafting what they call "experiences" that go beyond mere "events"—the product of which was on display at last summer's Downtown SLC Open Streets event series. "That was the first show we did outside of the live streams," says Bueno of the Open Streets event, which featured a performance by local Austin Payne.

In addition to The Blocks and Downtown SLC inviting Social Antidote back for another round of Open Streets events this spring, the group has been running with the inspiration they gained from the experience. What followed was a New Year's Eve "hybrid" event that had them displaying a pre-recorded performance on the big screen in the plaza at The Gateway. Following that, they collaborated again with The Blocks and Downtown SLC to put on more filmed performances, featuring Cherry Thomas at UMOCA, Evan Taylor at Rocket Skate Studio and the Provo band Brother. performing from "The Alley" next to local clothing shop Fice. Molly Cook also connected Social Antidote with Municipal Ballet for the filming of their annual performance of River of Rosewater. All this has contributed to yet another of Social Antidote's wholesome goals: a desire to collaborate with multiple players in SLC's local culture, beyond just music. It's also all made good practice for their next endeavor—"The Capsule," a collection of hybrid shows.

Johnson notes that people seem to have been yearning for live shows; at their Brother. shoot, "people started piling up at the end of the alleyway at Fice to watch what was going on, and it was like 'hey you guys gotta keep going on.'" But that experience with crowd-control and socially-distanced show-set ups (like putting members of the band on separate platforms, or making a tunnel for walking through at Open Streets) will ensure a safe arrangement at their first indoor Capsule event on Wednesday, Feb. 24.

Bueno says, "With The Capsule, we're doing online, pre-recorded content, but then people will also be able to attend this limited capacity event" at The Gateway in the old Urban Outfitters space. Isaac Gonzalez, who has experience in high-tech show production, says, "It's kind of like this cool new hybrid experience where it's like an art installation, but where we're showcasing music with light and high-end production," for an ultimately immersive effect. Since it's limited capacity, Cook also points out that the set-up will involve many stop-and-go points, plus seating pods throughout the space to keep attendees safely apart.

While it will be unusual, Bueno says that he thinks it will be novel for showgoers in more ways than one. "One of the takes for an attendee is being able to experience music in a different way, maybe watching musicians from a spot you normally wouldn't unless you were in the band and watching from backstage," he says.

They've also decided to keep the talent a secret. "Sometimes what happens is that people think of local music like, 'eh, no.' So we want to make you go in there and be like 'wow this is local?' We want you to attend the thing for the experience, and then when there, you'll find your favorite new artist."

Simply talking with Social Antidote about these creative ambitions is enough to make one forget about the pandemic—a blessing in itself. So why not give their next event a chance? Visit socialantidote.live for info on the Feb. 24 date, plus access to their past recorded sets, and follow them on Instagram at @socialantidote.live for more updates.