THE MANY SAINTS OF NEWARK
Michael Gandolfini
Alessandro Nivola
Jon Bernthal
Rated R
Available Oct. 1 in in theaters and via HBO Max 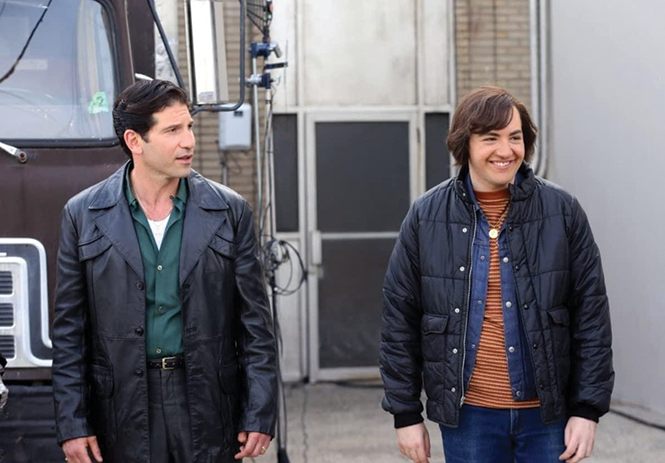 The title of The Many Saints of Newark is a great one: memorable, unusual and, most, of all ironic, because this is a movie about mob guys who are the furthest things from saints. But it's also just plain factual, since the movie isspecifically about Dickie Moltisanti, criminal mentor to Tony Soprano and father to Christopher Moltisanti, central figures in themuch-loved and highly praised 1999–2007 HBO TV series The Sopranos. "Moltisanti"? It's Italian for "manysaints."

Here's the thing, though: Did we need a Tony Soprano origin story? This fleshing out ofDickie—who was dead by the era the TV show is set in, yet whose spirit loomed over it in numerous ways—is meant to showhow he influenced young Tony. But wasn't The Sopranos itself pretty much all about Tony trying to unravel, through therapy, where he came from psychologically, and why he was the way he was?

So, alas, Many Saints feels redundant, and in more ways than one. Series creator David Chase wrotethe script with Lawrence Konner, and director Alan Taylor directed several Sopranos episodes, yet this feelsmore like GoodFellas-lite than The Sopranos. There's little of the introspection and intriguing self-awareness that made theseries such an unexpected joy, which is perhaps not surprising: a movie is not a TV show. But there's several TVseasons' worth of story crammed into Many Saints, to the point where the elisions needed to make it all fit into two hourssometimes become distractingly confusing or exasperating.

One big example: Is it Dickie's wife or his mistress who gives birth to baby Christopher? It's the sort of thing that knocks youright out of the story as you attempt to decode the clues the script has littered up to this point, but it's not intended to be amystery. It doesn't help that the actresses in the roles—respectively, Gabriella Piazza and Michela De Rossi—look very alike. Andit's indicative of the short shrift the female characters get, even when they're meant to be key to understanding the unexaminedhypocrisies and explosive violence of Dickie's personality. The women here are sacrificed to men's journeys, literally andfiguratively, in a way all too familiar onscreen, which was not the case with The Sopranos.

There are saving graces to this often-trying movie, mostly from the spectacular cast. Alessandro Nivola isriveting as Dickie, giving him more depth than the script does. Ray Liotta does some of his best work since perhapsGoodFellas itself as an elder Moltisanti who becomes an unlikely sounding board for Dickie. Vera Farmiga as Livia, Tony'smother, elbows her way into a bigger role than the movie wants to give her room for, letting quiet moments speak to Livia'sfrustrations and disappointments with her husband—mobster Johnny Boy (Jon Bernthal), who is often away in prison—andhow her unhappiness affects Tony.

And it is beyond poignant to see Michael Gandolfini, son of the late Sopranos star James,damn near bring the gone-too-soon actor back to life as teenaged Tony. Gandolfini not only looks like his father, embodyingTony in a way that avoids impersonation, but he manages the same roiling depth of feeling in his baleful, angry glare, whichdoes more to make Tony real that almost anything we see happen here.

The evocation of the period is striking, too, from the mid-1960s through the mid-1970s; a scene with a Mister Softee icecream truck slammed me right back to my 1970s suburban New York childhood, just for how right it gets the look andfeel. But the volatility of the era—there's a long sequence during the first half of the movie set during Newark's 1967 race riots—is a story in itself, and perhaps the most unforgivable shortcut the movie takes. Much of the conflict in Dickie's journeycomes from clashes with former criminal colleague Harold McBrayer (Leslie Odom Jr), who decides to go into rival feloniousbusiness on his own. Odom is mesmerizing, and Harold deserves his own movie, not least because white filmmakers using Blackpain as a backdrop and opportunity for the growth of white characters is yet another tired cinematic cliché that The ManySaints of Newark indulges in. Anyone who loves The Sopranos and appreciates how it continually upended stereotypes isexcused from expecting more from this film.