Plus: Game of Thrones, Countdown 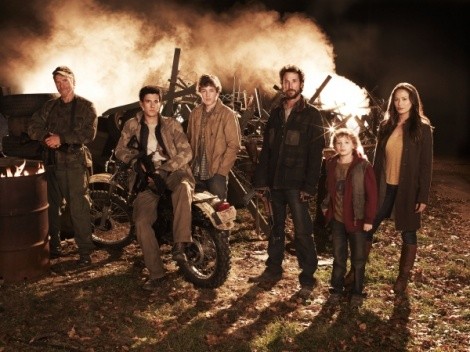 Two-Hour Series Debut: Forget recent alien-invasion flops like V and The Event—Falling Skies is the one that gets it right. While you’re at it, also forget Noah Wyle’s post-ER fluff like The Librarian, because he’s finally arrived as a real leading man. Here, he plays history professor Tom Mason, a civilian who, in the aftermath of a hostile alien occupation, becomes a default military co-leader thanks to his knowledge of classic war strategies, not to mention a grudge against the invaders who killed his wife and took his son (who, along with hundreds of other kids, has been turned into a zombie slave via a sinister slug attached to his spine). Falling Skies, at least initially, is more about the festering drama between the military and the small colony of survivors they’re protecting (“eaters,” as they call them) than the aliens—but when the eight-legged freaks and their robotic drones do show themselves, they’re scary as hell. Smart writing, great casting (including comic-relief Colin Cunningham as a sarcastic rogue: “Leading a post-apocalyptic band of outlaws is exhausting”) and blockbuster-quality special effects (Saturday-night Syfy, this ain’t): Falling Skies lives up to all of its ramp-up hype and then some—and I haven’t even mentioned exec-producer Steven Spielberg.

Season Finale: Sooo … this hasn’t exactly been a warm, fuzzy romp in the Hobbit woods, has it? HBO’s epic adaptation of the bloody, rape-y George R.R. Martin fantasy book series will be back for a second season next year, even if a few of the characters who newcomers might have considered to be indispensable “stars” won’t—gotta respect a show that’ll kill off anybody, at any time, to faithfully further the original story. Game of Thrones may be the least sentimental serial ever (previous grim HBO entries like Rome and Deadwood almost look like Hallmark miniseries in comparison), but there’s never a wasted moment. Traditional logic says that a little light would shine in the finale of such a dark first season … so I’m expecting more beheadings, bloodbaths and maybe even some bestiality for good measure.

Countdown With Keith Olbermann
Monday, June 20 (Current)
New Network Premiere: Fired mid-show by MSNBC in February of this year, Keith Olbermann surprised those who actually cared (we’re not exactly talking about Conan O’Brien here) by taking his Countdown to Current, a miniscule cable channel that makes MSNBC look like a ratings juggernaut. But, if you can find Current in your cable/satellite lineup (Comcast 107, DirecTV 358, Dish Network 196 or Current.com), look for a refreshed, unrestrained and (hopefully still) pissed-off Olbermann with plenty of new conservative-assclown targets to obliterate. And, yes, probably some Weiner.

Nurse Jackie, United States of Tara
Monday, June 20 (Showtime)
Season Finale, Series Finale: The Only TV Column That Matters™ still can’t understand why Nurse Jackie not only gets more critical attention than United States of Tara, but also a fourth season: Showtime canceled Tara a few weeks ago, leaving those of us who’ve seen the end of this season with a severe case of advance cliffhanger guilt. I’m tempted to say just skip the last episode of United States of Tara, because it’s not a clean or satisfying wrap-up for the series, just a promise of more great performances from star Toni Collette that you’ll never see. Nurse Jackie, on the other hand, is just more of the same acidic, one-note RN antics from Edie Falco—mildly entertaining, but essentially a rerun of Seasons 1 and 2. Lousy call, Showtime.