Some say it's a "hate group," but Gov. Herbert says, "Welcome to Utah" 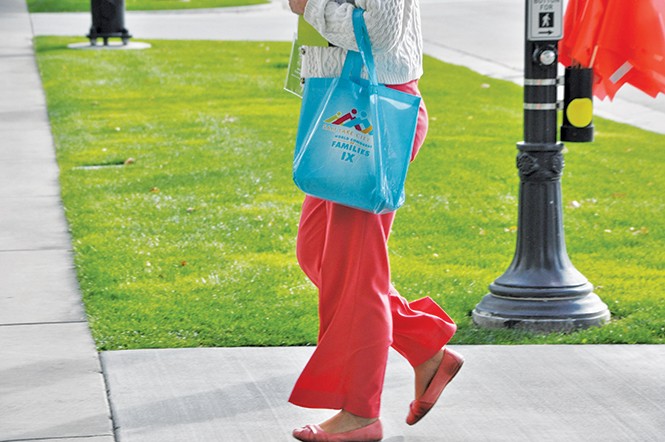 From stockpiles of multilevel-marketing firms like Doterra and LifeVantage to the semiannualOutdoor Retailer show, Salt Lake City is no stranger to conventions.

But this week, from Oct. 27-30, ballrooms at the Grand America Hotel are filled by delegates from a group that's never before held its convention on American soil: the World Congress of Families.

But the "family" the World Congress of Families (WCF) promotes is the so-called "natural family," consisting of a mom, dad and some number of children. This restricted view of the family, combined with the Illinois-based organization's support of numerous conservative groups—some of which advocate for anti-gay laws around the world—has earned it a spot on the Southern Poverty Law Center's list of hate groups.

WCF's leaders say its inclusion on the hate-group list is one of many "inaccuracies" being spread about the organization. They maintain they're simply promoting their beliefs that gay marriage, pornography and abortion aren't helpful to furthering the natural family.

Mark Lawrence, founder and director of Salt Lake City-based group Restore Our Humanity, says he began researching WCF nine months ago when the Utah conference was announced. Since then, he bought the website domain WorldCongressOfFamilies.org, which the WCF did not own, and has posted information there in an attempt to educate Utahns on the group.

That the WCF chose to have its conference in Utah—a decision due in no small part to the right-leaning Utah-based Sutherland Institute hosting the WCF—doesn't bother Lawrence so much as the warm greeting being shown by some of Utah's elected leaders.

"It's extremely inappropriate and wrong for him to be participating in that event," Lawrence says of Herbert. "They're welcome to come here and have their conference, but for our elected officials to participate ... is outrageous, and I think it's important that our governor understands that."

In his monthly news conference at KUED Channel 7, Herbert defended his decision to address the WCF, saying, "We have a lot of people here in our community. They have very diverse points of views and ideas. We don't agree on everything."

So Herbert feels comfortable rolling out the welcome mat: "It's appropriate for the governor to go to this organization and say, 'Welcome to the state of Utah. We hope you enjoy your stay here,'" he said.

When the WCF held its 2014 conference in Australia, it was met with fierce public opposition. Hotels declined to host the event. As public pressure mounted, right-wing politicians who were slated to speak withdrew.

This same level of outcry does not seem to have followed the group to Salt Lake City. However, Lawrence contacted officials at the Grand America Hotel to persuade them to cancel the reservation, but without success.

Security appeared tighter than normal, with a fleet of 11 police cars parked in the Grand America's south lot, four in the north lot and one posted out front. Beyond the heightened police presence, the general atmosphere resembled a Church of Jesus Christ of Latter-day Saints Relief Society meeting.

The week before the WCF conference came to Utah, the National LGBTQ Task Force—which promotes inclusion of the gay community in religious organizations—held its conference in Salt Lake City.

Several organizations and clergy held a news conference (organized by Massachusetts group Political Research Associates, where City Weekly freelancer Eric Ethington serves as communications director) to tell Utahns what the group is all about.

The Rev. Kapya Kaoma, a senior researcher with Political Research Associates, said what brings the WCF together with its partner organizations is their mutual "hatred against our fellow human beings."

Kaoma said WCF has helped push anti-gay laws in Uganda and Nigeria that criminalize homosexuality—contentions that WCF officials deny. In Salt Lake City, he says, America has the chance to take a stand against groups that advocate hate in the world.

"Their lies are killing people, and that cannot be done in the name of America," Kaoma said.

Restore our Humanity is hosting a protest at the Grand America on Oct. 29 at 6 p.m.

The protest, Lawrence says, will convey a more positive message than that espoused by the WCF. "We think all families deserve exactly the same recognition, the same respect and the same protection," Lawrence says. "We don't believe that any one person or any one organization has a right to stand in the public square and say which families are right for society. That's oppressive and that's demeaning to a lot of people."