Encanto's emotional message gets blunted by its familiarity 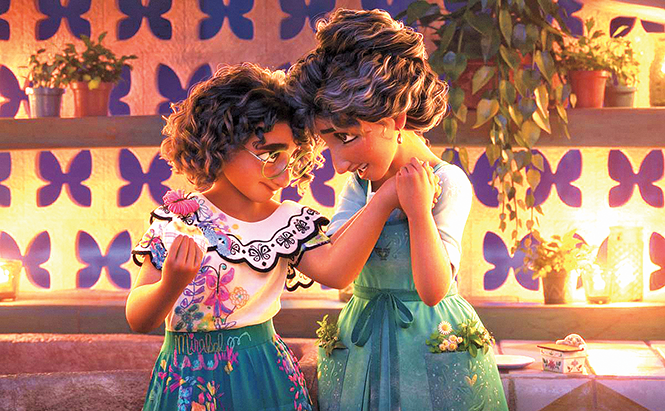 "My kingdom for a villain in a new animated movie," my friend, colleague and erstwhile podcast co-host Josh Spiegel tweeted recently, obliquely but clearly inspired by a recent viewing of Disney's new animated feature Encanto. And with respect to my pal, though I understand where he's coming from, I don't think the absence of villains is exactly the problem.

It is true, as Spiegel notes, that going back several years now, animated stories underwent a shift away from the classic Disney-style villains like Scar, Jafar and Cruella de Vil. In their place, those stories found their conflicts in relationship tensions, usually familial relationship tensions: Frozen, Moana, Onward, Coco, The Croods and many, many more. A lot of these stories have worked emotionally, and theoretically they allow for more nuance than a tale built around the machinations of a moustache-twirling bad guy. Yet as Walt Disney Animation's new Encanto shows, even when it's possible to find a slight variation on the theme, it's starting to wear thin enough that the emotional payoff falls a bit short.

The premise involves a hidden village in Colombia, where the refugee matriarch of the Madrigal family, Abuela Alma (María Cecilia Botero) has built a kind of utopia thanks to a magical candle. Subsequent generations in the family have manifested various special abilities—super-strength, shape-shifting, etc.—with the notable exception of young Mirabel (Stephanie Beatriz). Trying to find her place in the family despite being "normal," Mirabel instead discovers that she might actually be actively threatening to the family, based on a prophecy that links her to the magic candle's potential destruction.

Like most recent Disney animated features, Encanto gets off to a lively start with the scene-setting opening production number, in this case Mirabel's "The Family Madrigal." It's just the first of the many Lin-Manuel Miranda-penned tunes, full of the composer's trademark catchy tunes and rapid-fire lyrics. Directors Jared Bush and Byron Howard create a visual landscape in the sentient Madrigal home that they call "Casita" almost as boldly colorful as their Zootopia, with the characters' various "gifts" providing plenty of opportunities for entertaining character animation as well. All the artistic pieces are in place, just waiting for the story to deliver.

And it certainly does, at times. There's still potent material to be found in the idea of feeling out-of-place in your own family, perhaps even more so in the U.S. after a few years of relations strained by ideological schisms. Encanto delivers a few heartbreaking scenes emphasizing how painful it is to be estranged from those who are supposed to love you most, including the fate of Mirabel's outcast uncle Bruno (John Leguizamo).

The problem is that so much of this material feels like the stuff of a hundred other animated features. In a way, many of the stories like Encanto are merely evolutions of the "Rudolph the Red-Nosed Reindeer" plot, centered around black-sheep outcasts who eventually come to understand that the thing that makes them weird is also the thing that makes them special, or necessary, or maybe just not as weird as they initially believed. Beatriz's vocal performance is solid, conveying the tension of someone trying desperately to be the person they know their family wants them to be, yet there's never any doubt that everything will ultimately be resolved in a hug and a sense of mutual understanding—reassuring, perhaps, to youngsters in the audience, but also way too optimistic given the way such conflicts often linger.

It's true that Encanto gives this narrative a unique spin by focusing on the immigrant experience, and the pressure felt by second- and third-generation immigrants to earn the blessings available to them through the sacrifices of their parents and grandparents. There's a welcome twist to the formula in the songs given to Mirabel's two sisters, in which they reveal how they too have been affected by familial expectations, despite having the kind of magical abilities that Mirabel longs for; even the "good kids" in such a family can't escape the sense of obligation. Giving more diverse voices a place in feature animation is a good thing. All we can hope for at this point is that those voices, no matter where they come from, don't keep telling variations on the same story.