The idea of action without the execution 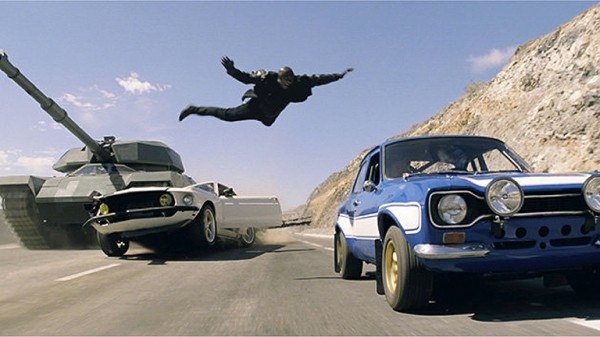 We couldn’t have seen this franchise coming—not this way, not the thing it has become. A dozen years ago, The Fast & the Furious was just a throwaway little actionsploitation pic about L.A. street racing, full of testosterone and gimmickry, built around two lead actors in Vin Diesel and Paul Walker who could headline cinema’s most epic ability-to-read-a-line-phonetically contest. But when Diesel opted out for the next couple of sequels, and a bunch of completely different characters had taken over for 2006’s Fast & the Furious: Tokyo Drift, it seemed dead.


Then director Justin Lin flipped the NOS switch, bringing back the old gang for Fast & Furious. And by the time an all-star team from all of the films was assembled for 2011’s Fast Five, the series was suddenly like the American equivalent of late-’70s James Bond: preposterous collections of stunt-filled set pieces, perhaps even more popular because of their preposterousness.


So, no, there’s really no point nit-picking the script of Furious 6—yes, that’s the way the title appears onscreen—as it gets the band back together after the big heist in Brazil that turned them all into fugitives. But law-enforcement tough guy Hobbs (Dwayne Johnson) wants Dom (Diesel), Brian (Walker) and company to help take down an international terrorist (Luke Evans), and Hobbs has got just the bait to convince them: a recent photo of Dom’s beloved, supposedly dead Letty (Michelle Rodriguez). And since they’re all family—a word shared so many times you half-expect a Sister Sledge reunion to break out—everyone’s back in.


In a way, the unrepentant melodrama of Furious 6 turns into a weird sort of charm. Brian has a new baby to worry about. Dom gets a sensitive reunion with Letty, who is suffering from—now we know we’re in a soap opera—amnesia. Characters have conversations about where they’re gonna go when this job is done, like doomed grunts in a World War II movie. It’s not just vroom vroom and kaboom. It’s personal.


Yet, everyone understands we are really here for the vroom vroom and the kaboom, and occasionally Furious 6 even delivers. New to the cast is Gina Carano as the rookie partner of Johnson’s Hobbs, and the Haywire star/ex-MMA badass rocks a terrific one-on-one battle with Rodriguez that could only be called a “catfight” if both of the cats involved were lions. One of the big centerpiece sequences, involving our anti-heroes chasing the villain and his tank down a freeway, gets maximum mileage out of its over-the-top scenario. Lin understands his audience, and he understands the kind of crazy junk they want to see happen.


What he doesn’t understand, unfortunately, is how not to make it look terrible. Because, like Lin’s previous three F&F franchise entries, this one is more about the abstract idea of the action sequences he’s putting together than his ability to put them together in a way that makes any sense. Too much of Furious 6 is a textbook example of inept action editing, most notably in the climactic pursuit involving a massive cargo plane and (apparently) the longest runway ever imagined by humans. Lin’s got stuff going on in four or five different places at once, and can’t focus on any one of those places long enough for it to be clear what’s going on. It all becomes a pudding of two-second shots that we’re expected to find exciting simply because it all ends with a car driving out of burning wreckage. This is a movie predicated on the presumed awesomeness of its action beats, yet those sequences are built like a 4-year-old stacking Legos at random based on whatever he happens to have in his hand at the moment.


Furious 6 ends with a teaser for the already-in-the-works part seven, and admittedly, it’s the kind of kicker that will bring the house down. Maybe there’s even reason to be optimistic, as Lin has announced he’s bowing out of the series. Folks are often willing to overlook the flaws in genre films because of the giddy adrenaline rush they promise. Here, there’s nothing but adrenaline, and a misunderstanding of whether a collection of stunts is actually any good beyond the idea that those stunts are getting faster and furiouser.