An affectionate reminder of the places-within-places we've missed 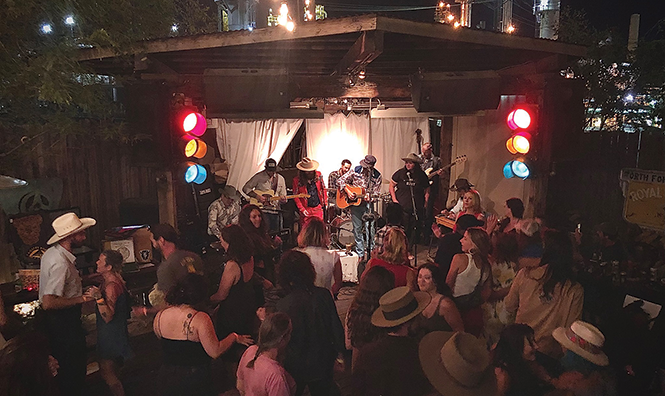 These four spots-within-spots are among the first places I returned to during this summer's slightly-less scary version of what is still a global pandemic. Like many things I took for granted pre-2020, I didn't expect these little passages and pockets of space to have been so important to me, but in retrospect, public spaces are constructed and made important through our particular use of them.

Recently finding myself slipping into old grooves in the venues listed below made them feel suddenly alive with old energy, like one car jump-starting another. Coming back is scary, but here's my tip for those feeling numb to the city: Find your grooves and move through them. Soon you'll be creating new ones. Feeling may return more quickly than you think. And while some old haunts are gone, the many that remain carry the old rhythms I thought I might never feel again.

The Urban Lounge. Every time I go to The Urban Lounge, I move along a predictable path: head to the bar, order a shot and a beer, then beeline back to the booth immediately to the left of the entrance to stake out my desire to be in a crowd. I know it'll show up eventually; I'm just never sure when. This is especially the case these days, where a year without normal socialization has left me a shriveled husk of a conversationalist. Socializing is scary now, and a completely benign situation can carry all the nervous energy of a middle school dance—everyone is aware of everyone else. But from my booth, it feels like no one is really paying attention. It's easy to spot, so you're not hiding, but you are sending out the appropriate signal: "I'm here, but I'm not quite ready."

So, you've reached for a social stimulant, and you're waiting for it to do its thing—to make the crowd feel unthreatening—and your limbs are prepared to sublimate all your nervous energy into something that looks like dancing. Some nights, this is where you'll stay all night long, because the feeling just doesn't go away. Some nights, you try to do the thing and you don't, but you tried. As it turns out, a booth and beer to yourself aren't so lonely in light of an earnest attempt to be a person again.

Garage on Beck. When I go to Garage on Beck and sit outdoors on the red dirt landscaping, I feel like I'm in southern Utah. As you enter and head right towards the outside seating area, passing through the cooling misters hung overhead, the smokestacks of the Marathon refinery peer and billow over the wooden fences like a St. George Windmill palm, gouging and churning the planet while you enjoy a drink and a show.

Head toward the outdoor stage (one of the two, the other being inside) and hang a right, to the north of the planter box. Here is the ideal spot. From here you can fence-sit, metaphorically keeping one foot in the show and one foot out. You can hear and see the music, but also comfortably carry on a conversation, even when it's busy. The ambient sounds of the kitchen, Beck Street, the refinery or just other people all bubble up and away without piercing your own space. Even when a show is playing, you can still hear pretty well, and as someone with auditory processing issues, this can save a night. I've ended up having many important conversations with people that were facilitated by this unique space.

Willies. Willies will always hold a place in my heart for being a weird place to dance and play Jenga. As you enter, head across the room to the door leading outside and go right into a small shed—time to post up. In my experience, people tend to gravitate here only briefly to play with the large-scale Jenga pieces, and then move on. You can still hear the music inside, so you'll never miss your song, but you can still hang out, people-watch and maybe make a new friend. On a particularly busy night, this strategy can implode, as the shed can quickly become overcrowded. But on a cool weeknight? It's cozy and calm, and the music will keep you company.

The Beehive / Mark of the Beastro. Thank God Beehive is still here. Thanks to a community-funded Patreon, the scrappy DIY venue that daylights as a vegan cafe has been able to hold online shows and livestreams over the past year, but of course that's no match for Beehive's actual show space. This is the kind of venue where the only acceptable spot for a show is at the front––in the center or on the sides, it doesn't matter. Prepping for a show at Beehive means mentally preparing for maximum presence of mind, in order to take in the show at full volume and close to the performer—even for the smaller shows. There's no place to sit or stand besides the floor, so embrace it. Be the teacup with a firehose aimed at it, and if you shatter, congratulations! You did it right.