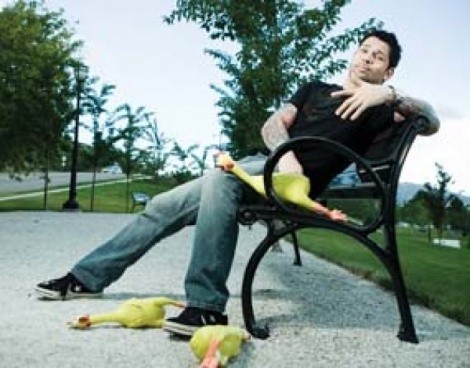 On May 22, 2008, the sixth season of NBC’s Last Comic Standing—sort of an American Idol for comedians, only less harmful to the nation’s youth and ears—opened with a mild Thursday-night bang and thousands of auditioning yucksters from more than 20 countries.

And one from the least funny country of all: Utah. 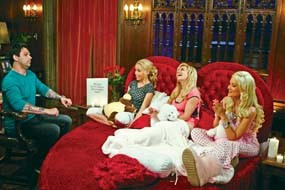 West Jordan comic Marcus (formerly known as “The Man of 1,000 Voices” and, less grandiosely, Mark Hardy) made the first cut on Last Comic Standing’s season premiere and has ridden it all the way to the Final Five in the season finale (Thursday, Aug. 7; broadcast live from Las Vegas on NBC), thanks in part to winning an immunity challenge with Hugh Hefner’s girlfriends (right) at the Playboy Mansion (yeah, rough gig), but mostly by being funnier than the rest of the pack. America may very well vote him the Last Comic Standing.

Too bad about the local-media blackout conspiracy against Marcus, huh?

OK, that might be an overstatement—but compared to the months-long (and still going!) Utah media orgasm over American Idol’s David Archuleta, the cute Mormon teen from Murray who eventually took the silver, Marcus might as well be competing on the Food Network. No, wait: Kelsey Nixon got more coverage, too. Aside from some radio and City Weekly’s print and blog reports about Marcus’ progress on a major network reality show, the Salt Lake City media has virtually ignored one of its own.

Strange, because apart from his gritty look and full sleeves of tattoos, Marcus embodies the Utah ethic: Work, work and more work—for damned little money. Since quitting his rock band (Showdown to SXSW ’04 finalists Rune) just a few years ago, he’s mastered hundreds of voice impressions, toured relentlessly, released two live DVDs, won numerous comedy competitions, landed several local TV gigs (including a semi-regular stint with Fox 13, whose reporters have been dead silent about their former colleague) and reset the bar for tireless self-promotion. He’s only a million or so Friends shy of Dane Cook’s MySpace army, after all.

Win or lose on NBC, Marcus will be part of the marathon Last Comic Standing Tour that stretches from Aug. 29 into next year. Naturally, it’s not coming to Utah, but Marcus will be performing a pair of Wiseguys Comedy Cafe shows at the Ogden (Saturday, Aug. 9) and West Valley City (Sunday, Aug. 10) locations before he hits the road with the other LCS finalists.

Of course, it would be sweeter if he won. Vote for the local boy on NBC, if only because Utah is sorely lacking in reality-TV winners thus far in 2008 (last David Archuleta burn … maybe).