Feature | Gloves Come Off: Round One begins at the Legislature to end prejudice against the transgendered


Natural Transsexual
“You are what we call a ‘natural’ transsexual,” explained the Navy physician to young Navy cadet Losco. Still David, and still a man at the time, but very much in search of herself, Losco (who wasn’t using that name yet) had wound up in the Navy at her mother’s request and spent more than seven months in a San Diego boot camp and the Naval School of Health Sciences. Only a week away from completing training with certification as a Navy hospital corpsman, Losco found herself blacking out during runs.

It was then that Navy endocrinologist told Losco her hormone levels were completely out of balance and that she would need testosterone injections to remedy the problem. 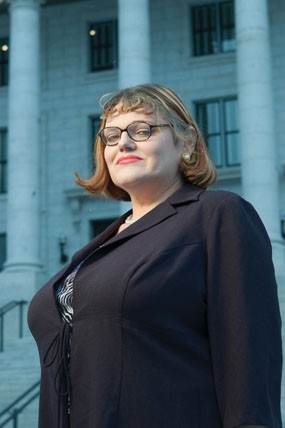 “When I asked him what would happen if I got more estrogen, he said, ‘Well, you’ll become more … female,’ ” Losco says. “When I told him I wanted that, he said, ‘You’re going to have to get that on your own; the Navy’s not going to cover that.’” A week later, Losco left the Navy, returned home to Florida, changed her name and started on estrogen hormone therapy. “That’s when I started down the path,” she says.

Once she left the Navy, Losco accepted an identity that was not only written into her biology but also matched up with the way she was raised. The youngest of eight, Losco says she was raised mostly by her five sisters who took care of her while her mother was at work. They treated their young “brother” like another sister.

As soon as Losco started school and until she graduated, the effeminate voice she knew as hers drew mockery from schoolmates. “I like to think of my high school days as legalized public torture,” she recalls, with a nervous chuckle.

Growing up in the small rural town of Kissimee, Fla., a “cow town” as Losco calls it, the treatment she received was endlessly cruel. The usual vignettes of happy high school memories were, for Losco, marred by terror. The night of the homecoming football game, she says, a pack of kids bent on lynching her for being a “fag” carried her off school grounds. She escaped that night, but it didn’t end there.

One day while walking home from school, a car swerved intentionally from the side of the road onto the sidewalk and slammed into Losco from behind, the shove of the bumper throwing her over a neighbor’s hedge. The car peeled off, leaving her in a heap on the ground. While not seriously injured, Losco remains scarred by the memory.

But those were the scars of David—the birth name of the man who desperately wanted to be a woman. In 2007, after having lived a decade as a fully transitioned woman and happily married for the past 15 years, Losco was startled to find her nursing supervisor at the care facility where she worked allegedly treating her with the malice she thought she had left behind decades ago.

As a nursing assistant, Losco had been making a living in Utah, where she had moved to help care for her ailing mother in 2002. When her mother died of kidney cancer, Losco decided to stay and make a career in elder care.

Losco alleges her supervisor began harassing her for her transgenderism, and her new life in Utah became an ordeal. “She would call me a ‘freak’ every time I passed by and once [after I complained], she said, ‘You’re just insecure because you have breasts and a penis.’”

Losco says her supervisor one day pinned her by her wrist in her chair. She told Losco she couldn’t leave the premises. Her shift had ended but the supervisor demanded she take care of another work errand. Losco immediately filed a complaint against the supervisor with her employer, who informed her they would be handling the case “in house.” Management put Losco and her supervisor on different shifts. They also urged Losco “to develop a thick skin.”

Losco was fired from her assistant nursing job on Jan. 10, 2008. A spokesman for her former Tooele County employer would not address Losco’s specific complaints. He says the reason for her termination was not because she is a transgender person, but because she had disparaged the company in a recent Associated Press story.