Feature | On Display: Powerful 337 sequel should wake up everyone who loves art 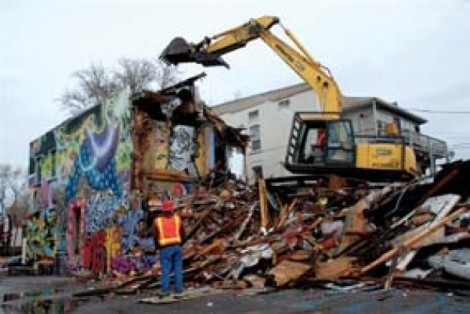 When Salt Lake City filmmakers Davey Davis and Alex Haworth invited artists, friends and family to a sneak preview of their 337 documentary early this spring, even they couldn’t predict audience reaction to footage of last year’s groundbreaking art project. The 337 project demonstrated to Salt Lake City—and quite possibly beyond—visual art’s potential to transform, unite and inspire. It also encouraged artists to embrace the temporal. From the start, artists took part knowing the building that was their canvas would eventually be demolished. They met the challenge and walked away.

No one protested when 337 tumbled to the ground on April 5, 2008, and later in the Fort Douglas Post Theatre, no one outwardly cringed as archived footage revealed a giant bulldozer gnawing on 337 again and again, its steel teeth chewing up fragments of the two-story building in downtown Salt Lake City and spitting them out like chunks of colorful cake. No one screamed it outright, but the collective hoots and hollers spoke volumes: “Burn, baby, burn!”

Casual observers still may not understand why anyone involved in 337 could enjoy watching its demise. The building united not only professional and amateur artists, but art lovers from all over who turned out in droves to get a piece of the action. Their hunger: insatiable—a strong indicator that, given the right circumstances, Salt Lake City would respond to exploratory art.

“There’s clearly a demand out there for certain kinds of artistic experiences that isn’t being met,” says Salt Lake City lawyer Adam Price. Planning to live downtown, he and his wife/artist, Dessi Price, originally purchased the 19th century bungalow-turned-Plain Jane office space on 337 S. 400 East. Upon learning the building was structurally unsound and should come down, they invited local artists to participate in an experimental endeavor loosely modeled after New York City’s 11 Spring Street—a legendary destination for graffiti artists who had their way with it in 2004 before a developer swept in and transformed the five-story New York landmark into high-end condos.

Back at home, 10,000 people walked through 337 during its three-day run; many more were turned away at the door. Media outlets, including City Weekly, went nuts with coverage—even television news that rarely, if ever, graces downtown gallery strolls showed up, cameras blazing. The curious drove in from Tooele, Park City, Ogden, Provo—you name it—to see what all of the fuss was about. Filmmakers Davis and Haworth recall a kid who rode his BMX bike from West Valley City—not the easiest trek, to be sure. As artist Ben Wiemeyer commented weeks after the documentary screening, “If it’s good enough, they will come.”

“Good enough,” however, is an understatement. Artists in the film frequently toss out terms like “elation,” “freedom,” and “complete joy,” when reflecting upon the 337 experience. Where else, they ask, are you given a space and told to just run with it?

Artists selected to participate in Present Tense: A Post-337 Project, which opens June 20 at the Salt Lake Art Center, definitely weren’t encouraged to “just run with it.” Unlike the original project, this juried exhibition provided rigid guidelines for the more than 75 applicants, 25 of whom were selected based on how successfully their submissions reflected a critical examination of the change in space, how well they played off each other and how effectively they tied together two seemingly disparate platforms. Some artists considered the application process to be “restrictive,” while others accepted the guidelines as perfectly reasonable and affording them the chance to show their work in the prestigious art center which typically features exhibits of national and international acclaim.

The contrast between 337 and Present Tense provides an opportunity for Salt Lake City to revisit the age-old question: “What is art?” And, perhaps more importantly, “Why should we care?"

It might seem like a lot of esoteric nonsense, but consider the implications: certainly, we call it “art” when it’s framed and hanging in a gallery or museum. But art comes alive when it’s splattered across cinderblock—or on a set of garage doors on the west side. Adam Price, who recently incorporated 337 as a nonprofit and now sits on the Salt Lake Art Center’s board of directors, sees the whole community as a canvas. He and other art enthusiasts are collaborating on projects to bridge historically wide gaps: east side, west side; fine art, urban art; class divides; tension between artists and the institutions that show their work. If everyone could come together, the collective force might help convince the public to buy into this thing they call art.