A Cheap Act of Revolution
One reason for skating’s barrier-breaking inclusiveness is that, compared to sports like skiing, golf and tennis, it’s a fairly inexpensive pasttime. A good board can be had for $150, a decent one for even less. And London professor Borden notes most of the ongoing costs of the sport involve replacing shirts and shoes.

Meanwhile, the opportunities to skate are many and varied. Beyond skate parks and certain spots where skaters gather to practice tricks, the somewhat recent advent of longboarding has expanded the borders as to who can be a boarder. A whole new group of people have taken the sport—quite literally—to the streets. Skate parks have also grown in number, or if that’s not available, “Downtown becomes a skate park when you look at it differently,” says Mark Stosberg, a Website developer in Richmond, Ind. He founded the site SkatePark.org, which is now run by the nonprofit Skaters for Public Parks.

Others may not share that view, especially if they have to put up with skaters hanging out by their store or parking lot. Borden suggests taking another look. Skaters, he says, are engaging in activities that cut to the very core of what it means to live in modern society. He goes so far as to declare that skaters are doing what French philosopher Henri LeFevbre of the Situationist International (portrayed as ideological forerunners of punk rock in Greil Marcus’s 1989 book, Lipstick Traces) spoke of in his book The Production of Space. The book came out in 1974, about the same time the first wave of skateboarding hit in Southern California. It theorized that people engage in small acts of revolution when they use commercial spaces for noncommercial purposes.

“It’s going out into the streets and using places in ways they weren’t intended to be used,” Borden says. Rather than focusing on the nuisance skaters sometimes create, Borden maintains the sport “teaches kids to be urban citizens.”

Whatever they’re learning, those who start skating are taking up a sport that draws a wide variety of people because, as local skateboarder Adam Orsini says, “The thing about skating is there are no set standards. … There are no weight or height requirements. You don’t have to be able to run the 40 [yard dash] in a certain amount of time. Skating is a completely nonbiased sport. All it requires is a little dedication.”

It’s also an activity that encourages individuality, which in turn helps create an atmosphere of acceptance, particularly when there is no coach for the athelete to play up to or teammates to impress. There are only other skateboarders to learn from.

“You don’t have to have an authority figure or coach,” Stosberg says. “Look at what schools provide for sports. It’s almost always something with a hierarchy, or us vs. you. Skating is a freestyle activity. It’s noncompetitive. You do your own thing.”

Ironically, it’s while doing their own thing that skaters learn the customs of the skate culture while also building relationships. 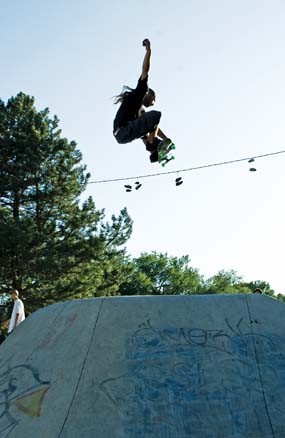 “Usually people that skate have a certain level of respect for other people that skate,” Orsini says. “There is somewhat of an unspoken code of conduct for the skate park. Everyone gets a turn to go, and everyone gets a turn to wait. … The way I look at it, once people enter into the skate park to skate, they are a skater. It doesn’t matter what language they speak or what color their skin is or what group they belong to.”

The blending of people and cultures in skating makes it difficult to tell where different influences begin and end. Social commentators have pointed out the similarities between hip-hop culture and skate culture. Stosberg noted in a presentation he gave in 2000 that, “Both skateboarding and hip-hop are street cultures. … The cultures share similar attitudes towards authority … with an ethos of ‘do what you want, when you want’.”

In 2006, rappers Lupe Fiasco and Pharell Williams had a hit with “Kick Push,” a song with lyrics paying tribute to skateboarders. Similar songs by other artists have led to the creation of "skate rap.”

“Hip-hop and skating seem to have a lot of the same music and clothing,” Stosberg says. “Sometimes it’s hard to tell where things started.” Take, for example, the whole tradition of wearing baggy and sagging pants. “It seemed to run parallel in both cultures.”

Whoever gets the credit, Stosberg sees skating, hip-hop and whatever else gets thrown in the mix as part of one unifying culture.

“I would frame skating as an urban culture.”

Whatever it’s called, it’s a culture with deep value, Borden says. “What else would you rather have your child be doing?” he asks. “I can’t think of a better thing for a 14- or 15-year-old boy to do.”

That teenager could hardly find a group of people more open to accepting others.

“Your background becomes invisible,” Steimle says. “…skaters don’t care about race, what your family situation is like, whether you’re a Mormon or pothead, or whether you live on the east side or the west side. If you can skate well, then, that’s all that matters.” tttt