DON’T FENCE ME IN
As a child in Provo, Bartlett remembers the family car passing under a highway bridge. He’d touch the car ceiling, his father would honk the horn, and the boy would make a wish for a horse.

Raised a Mormon, by the time Bartlett attended high school, he was nevertheless smoking and drinking. For four years, he had what he calls a “society says” job in neighboring Mapleton, running a backhoe. His drinking and staying out all night killed his first two marriages. “I was going to be dead or incarcerated for the actions I was taking,” he says. On Oct. 1, 1989, he quit alcohol. It’s been day-to-day ever since. “Hold your breath for five minutes,” he instructs. “You want to take a breath as badly as I want a drink.”

All his life he yearned for the Hobble Creek riding job. In 1995, the roughrider at the time, Jim Diamond, was set to retire. The board offered Bartlett the job. The livestock owners back then, argues roughrider Burdel Olsen, “really appreciated him,” because Bartlett knew every square foot of the country. He wasn’t like the cowboy of today, who puts on a show “of flash and flair,” Olsen adds. Many of the 1995 board members made a living off their cattle, unlike the current ones, who have other jobs and view the stock as an investment. “Flair means something to them,” Olsen says.

So the new generation of boutique cattle owners would come up for scheduled cattle moves, and, as Bartlett puts it, “John Wayne the hell out of things for a few days.”

For some permittees like Hutchings, whose blue eyes blaze out of his swarthy, trail-dusted face following a long afternoon moving cattle, the association is far more than a chance to play cowboy. “I have boys, and I wanted to raise them doing something like this.” That’s a refrain Bartlett understands, having raised most of his children up in the canyons, helping out with the herds. 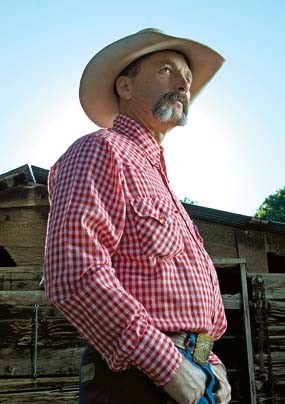 Hutchings’ great-grandfather was association president in the 1940s. That was shortly after the Taylor Grazing Law came into effect in the 1930s. This allowed cattle owners to lease federal land for a yearly fee for grazing rights. To secure a Springville Association permit, cattle owners currently pay a one-time fee of $500 per cow for the right to use Hobble Creek until they sell it. Former president Kent Murdoch sold his permits two years ago in an unsuccessful attempt to get out of debt from his years of cattle ownership. “I had some bad luck along the way,” he says. A train hit eight head of cattle. Others got into a hay field, ate some green alfalfa, tipped over, “and were dying just as we were watching,” Murdoch says.

Diamond worked with Bartlett his first few months, showing him the ropes. Bartlett learned what each owner’s herd needed in the way of pasture and care. “It don’t work worth shit if you don’t know your cattle,” Bartlett says.

He thought he had a job for life, though it paid only $9,500 a season when he started in 1995, and $15,000 when he quit. Out of that, he had to cover ever-rising fuel costs and horse feed. He was contracted labor—no workers comp or health insurance for a job that once saw his horse fall on him in terror at a charging bull, half-crushing Bartlett in a freezing river against boulders. He broke several ribs.

“Change of any kind was hard to put into Mike’s head,” permittee Hutchings says. Bartlett, however, says the association wanted more and more from him, removing him from essential care of the cattle. Bartlett refused in May 2007 to put up fences with the permittees or install the rodent escapes in the troughs the Forest Service insisted be put in, unless he was putting out salt at the same time. The contractors weren’t happy.

“It was the tail wagging the dog,” ex-president and former permittee Kent Murdoch says. “Good grief—if there’s a job to be done, it’s got to get done.” The association stood its ground and Bartlett quit. So the cattlemen hired young Gustavo Gomez, who, Murdoch says, does as he told. “He was tickled to death to do fencing,” Hutchings says. Hutchings and some of the other permittees did Bartlett’s job for wages of $65 a day.

If the problems between Bartlett and the association came down to money, Bartlett demands, then why did it rack up $3,000 more in operating expenses in 2007 than it did in 2006? Hutchings, who during the day is a power lineman for Provo City, says the day wages he and other permittees earned would have amounted to the same whether working on the seven miles of fences or putting out salt. The $3,000 expense increase over the previous year, he adds, was money well spent. They hired a helicopter pilot who specializes in herding wild mustangs with his chopper. The pilot brought down to the mouth of the canyon a number of strays they had been unable to find last October.

Bartlett spent most of the 2007 summer, he says, in a lawn chair, sitting under a tree. His credo had been if you live your life “by the purest form of the truth, your life will work.” After he quit Hobble Creek, his life stopped working. For a year until the following spring, he had to live with a terrifying possibility: He might never be paid to ride herd again. Prone to depression over seasonal changes as the months inch through winter, Bartlett says, “It was a daily struggle just to keep from hanging myself, or shooting myself.”

One night, he says, he stood outside his barn, about to feed his horses. He knew if he went in, he would throw a lariat over a rafter with a noose at the end. He called one of his sons to feed the animals instead.

TALK TO ME
Come spring this year, several permittees wanted Bartlett back.

“Some of the guys would stop by when Mike was working on a horse,” says Kim Bartlett, his third wife. “They were talking about it, getting his hopes up.”

Which left Bartlett waiting for May 15 once again.

After urging from Bartlett’s advocates at the association, Hutchings went to talk to the cowboy. A two-hour conversation left Hutchings unenthused. “I felt like I’d heard everything I’d done wrong and I thought, ‘Do I really want to hire this?’” Hutchings says money was an issue for Bartlett. “He told me ‘I can’t even work for $20,000 with the price of diesel and hay.’ That kind of wages ain’t there.”

Bartlett disputes that a specific figure was discussed. “I told him, ‘What about the money? As bad as I want to go back to work for you, I still can’t do it for nothing.’”

At the association’s annual meeting in April, Hutchings told the permittees that he and two other members had talked to Bartlett and “it looked good.” One permittee, whom Hutchings won’t name, stood up. He said, “I’ve run a business for 40 years and my business would never tolerate somebody running it without me telling them what to do and how to do it.”

Hutchings said to the permittees, “So I take it we’re gonna find another herder besides Mike?”

They agreed. That was the end of Bartlett roughriding for Hobble Creek for another year.

Hutchings says Bartlett’s two advocates at the association called him with the bad news. Bartlett and his wife say they heard nothing for a month.

“I don’t think any of them want to take responsibility,” Bartlett says.