BRIEF ENCOUNTER
Unfounded rumors around Springville and Spanish Fork that Bartlett had been offered the Hobble Creek job and turned it down didn’t make it any easier for him to let go of the canyon. It took a ride up the trail to do that.

He took his dogs Louise and Skipper and meandered up through the canyon, passing places he’d once left salt. Under the clear blue sky, as he rode trails he knows so well, clouds of grasshoppers erupted with the clop of his horse’s hooves. The silence of the canyon settled around him. No interference, no static from the outside world. Out there, he could get things sorted out in his head, at least for a while.

Bartlett stopped to look across the canyons at a lush spot of grass on the lower Clark benches. He’d taken a nap there once, the breeze rustling the tall, uncut grass. One day, he says, when he isn’t of use anymore, he wants to come here and get kicked in the back of the head by a horse, then just fall to the ground and return to his maker. 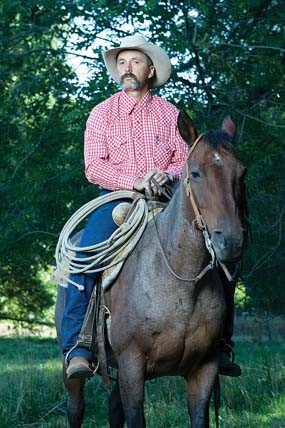 Bartlett followed the trail he would have used to take the cattle to the next allotment. No sign of the reddish-brown salt blocks. The other day he had found 30 head of cattle fruitlessly looking for salt on a bushed ridge he had always used.

He stopped to look over the canyon from another vantage point. Not a house, a trail of dust, the sound of a car or a human voice. It was a miracle that with all the country he was in charge of—still his, always his—he had got back home with one cow.

Two riders approached up the hill. Bartlett waited by the side of the trail. Up they came, inexorable in their slow, steady advance, unintelligible voices floating up before them.

The young men wore ironed shirts, elegant Stetsons and white leather gloves. They rode straight-backed and spoke Spanish. Bartlett doesn’t speak Spanish. He sat there in silence while the accompanying bilingual reporter asked the riders who they were. One rider introduced himself as Gustavo Gomez. His 18-year-old cousin, who had arrived in the United States three days before, kept his distance. Hutchings says Gomez has a two-year work visa.

Both sheepherders from Mexico, only Gomez worked for the association. “It is a lonely life,” Gomez said. “These are the things you do when you come to this country.” The association’s permittees, whom Gomez described as “vaqueros” or cowboys, were teaching him, he said. After the cows returned to their owners in October, Gomez said, he was going to work for association president Craig Sumsion. His unemployed cousin would work for Hutchings, something Hutchings says he was unaware of.

While Hutchings said a few days later he wanted Gomez to look after his cattle in the winter, it appeared, the permittee explained, that Sumsion also had his eye on the young herder to work full time for him. Instead of Gomez resolving the association’s labor problems, he apparently had unwittingly sparked an internal struggle over who would employ him. This left Hutchings and other permittees exasperated at the thought of having to start training a new hand to replace Gomez.

Bartlett leaned over and touched Gomez’s horse. “You like the horse, es bueno?” he said. It was a horse Bartlett traded years before, in the days when horses were worth far more than their current value of a nickel a pound with the head off.

“Ya, very good, the horse,” Gomez replied. Then the cousins rode on.

As Bartlett descended the canyon, swaying in his saddle, Gomez’s translated comments angered him. While he said nothing, his rigid back spoke volumes. He had long suspected the association had pressured him with their demands, hoping he would quit. Now he learned that men he regarded as friends might have hired Gomez not only to save money while tending Hobble Creek, but also to meet some of the needs of individual permitees for winter cattle care.

Finally Bartlett found a salt block, with two deep long grooves left by cows’ tongues. It was halfway down a trail, in a clearing, as if discarded as an after-thought.

CHILL IN THE AIR
Former association president Kent Murdoch and Hutchings both wonder if, when Gomez’s command of English improves, as Hutchings puts it, he’ll “be hanging sheet rock and pounding nails, because it pays more money.” Which takes them back to Bartlett. “Somebody’s going to be up there because they really want to be up there, not because the wages are that good,” Murdoch says.

If Bartlett wants his job back at Hobble Creek, he could have it for the asking. All he has to do is bow down. “If Mike wants to be up here, he’ll come to me or Justin Diamond and say, ‘Listen, whatever it takes, I want to come to work,’” Hutchings says. “And, until he does, I don’t see it.”

For now, Bartlett shoes horses for $60 a head and breaks horses for ranchers like Oregon-based Chris Meyers. Meyers drove 900 miles to bring Bartlett several quarter horses to break and, in one case, castrate. Meyers praises Bartlett’s intuition, his ability to get into a horse’s mind. “He’s an unbelievable horse trainer,” he says.

Bartlett takes the time to study a horse. That, however, is his undoing when it comes to making a living. His friend, Burdel Olsen says, “There’s no money,” in horse breaking unless you can break 10 at a time. “No way in God’s creation a guy can ride 10 horses and do them justice.”

For cattlemen, fall is a time for optimism, for profit. Their cattle come off the pastures and they can sell their calves.

Mike Bartlett doesn’t like the fall. Every October, when the leaves start changing and frost appears, his insides ache. When he was drinking, each fall he’d go on a bad running drunk. Sober, the drop in temperature isn’t any easier to endure.

One late August morning at 2 a.m., a fall breeze came through the window, waking him up. It made his soul sad. All he wanted was to be up doing his job, that job.

But, after meeting Gomez, something fell into place. Bartlett chose a new perspective—everything’s going to work out. And he has that deep, unfathomable connection with mother earth, with his god to draw on.

So he lay there in bed, watching the breeze rustle the moonlit curtain as it announced the changing seasons, and thought, “Things will be all right.”