Feature | Wikipediots: Who are these devoted, even obsessive contributors to Wikipedia? 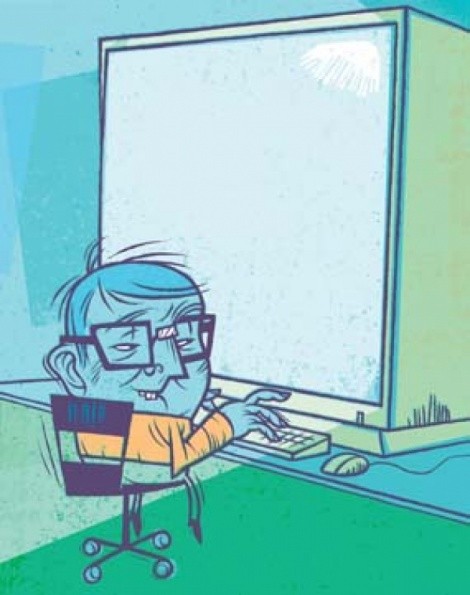 The ancient Library at Alexandria, once the largest on Earth, housed perhaps 500,000 volumes. Most were procured when Egypt’s Ptolemy III decreed that each visitor to the city had to hand over every book and scroll in his or her possession, regardless of subject matter or language. These texts were then copied by scribes, the facsimiles shelved in the library, and the originals returned to their owners. At least that’s what Wikipedia says, so take it with the proverbial grain of salt.

This summer, the modern Bibliotheca Alexandrina will host Wikimania 2008, the annual confab for producers and proponents of one of the largest repositories of information in the modern world—one whose legions of articles, spanning hundreds of languages and seemingly countless disciplines, also come from popular contributions.

The English-language Wikipedia site reached the million-article milestone on March 1, 2006, after five years in existence. Astonishingly, just a year and a half later, this past September, that number had doubled to 2 million. In all, there are some 9.1 million entries on the whole of Wikipedia. The entries span 253 tongues—including Choctaw, Võro and, yes, Klingon—and comprise more than 1.41 billion words. Wikipedia is the eighth-most-visited site on the Web and has become an invaluable resource for millions. It’s far from perfect—even farther from infallible. Yet, for all its ballyhooed flaws, it has fundamentally reshaped the way knowledge is disseminated and consumed. With just a few keystrokes, anyone can access a nutshell summary of almost any subject in world history, large or small, canonical or arcane, from the Brown Dog affair to the Destruction in Art Symposium to the Haines Index. Sometimes it’s hard to imagine life without such a resource.

But Wikipedia didn’t just spring up fully formed in our browsers. Since it was founded, by online entrepreneur Jimmy Wales and academic Larry Sanger on Jan. 15, 2001, Wikipedia has grown—immensely—with the steady accretion of contributions from volunteers the world over.

Who are they? And why do they do it?

Everybody’s an expert
The fact that anyone can edit the thing, of course, is its blessing and its curse. Only a vast-scale collaboration could create such a sprawling and ever-growing store of knowledge in such a remarkably short time.

But also, as has been well-documented, it has left the site vulnerable to vandals, propagandists and propagators (conscious or not) of Stephen Colbert’s infamous “Wikiality” of false consensus (wherein “any user can change any entry, and if enough other users agree with them, it becomes true”).

So, while most hail Wikipedia as a revolutionary model of co-operation, a free and open ideal that strives for accuracy and truth through constant review by its millions of contributors, others cavil that it’s unreliable and inaccurate, the kind of junky encyclopedia where the entry for Britney Spears (4,219 words) is longer than the entry for Brittany (2,512).

Ignore it, make use of it, or become addicted to it as you see fit. With or without your approval, Wikipedia is a fact of life. And if its recent past is any indication, it’s only going to get bigger—especially as related projects such as Wiktionary, Wikiquote, WikiBooks, Wikisource, Wikimedia Commons, Wikispecies, Wikinews, and Wikiversity continue to come into their own.

One thing that’s impossible to deny is Wikipedia’s sheer scope. There are 5,986,389 registered users on the English site alone. It’s a given that the vast majority of those (your humble correspondent included) have never done much more than add a link or fix a fact or correct a misspelling. But that’s just the point: Small contributions such as those, taken together with more substantial writing from thousands of others, have helped to make something great.

David Weinberger, a fellow at Harvard’s Berkman Center for Internet and Society, says that Wikipedia is “epically important. It’s not just that it’s generally a good encyclopedia. We’ve really proved something to ourselves: We now know without a doubt that some immense and immensely complex works of humans can be created by removing most of the elements of control.”

Online janitors
Serious, regular contributors, or Wikipedians, usually register with the site and set up a “user page.” That makes their entries more credible because they’re accountable, by name (or at least pseudonym), for what they write. You can learn a lot about the sources of your information by looking up contributor’s profiles (in the search window, type “user:[screen name]”).

Wikipedians are a diverse group. Poke around their user pages and you’ll see arrays of multicolored “user boxes” proudly announcing that the contributor is nearsighted, or an atheist, or Catholic, or gay, or Swedish, or a teenager, or a backgammon player, or a golden retriever lover, or a pilot, or a Zen Buddhist, or a Jedi, or a Red Sox fan, or an advanced C++ programmer.

For his part, Alex Sawczynec (username: GlassCobra), 20, a Northeastern University third-year, is a Gryffindor, likes to watch Adult Swim and prefers New York–style pizza. He’s also a tireless reverter of vandalism and corrector of misinformation on thousands of Wikipedia’s pages.

Although he’d been using the site since high school, Sawczynec confesses that the “stigma of being a nerd” prevented him from getting too involved, at first. Finally, in April 2007, he registered an account and started editing. In just eight months, he’s already logged more than 7,000 edits across a wide spectrum of articles, from Cam’ron to César Chávez to Insane Clown Posse.

Sawczynec’s written some from scratch, as well—such as the entry on the Philippines’ Manila Hotel. He’s also gotten heavily involved in Wikipedia policy discussions. And, this past month, his diligence and tenacity helped him ascend to the rank of a site administrator, which allows him to block harmful users, delete pages and send some of the more contentious entries into temporary lock-down. Administrator is an elite title: There are only 1427 administrators on the English-language site.

But “we try not to act like it’s a status symbol,” says Sawczynec. “We see ourselves as janitors, mainly. The symbol of the administrator is a mop. We are humble servants, just doing our best to clean up.” (So it’s not something he uses to impress the ladies at college keggers? “Oh, dear God, no.”)