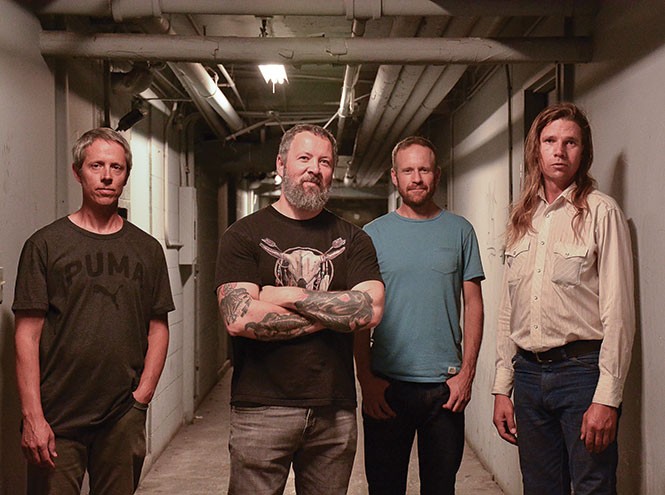 The esteemed '90s-era local hardcore quartet Iceburn was about mythic, elemental forces: fire and ice. They traversed those extremes over a decade, forging connections to numerous other local and national bands in a variety of genres, and the band is reuniting—with plans to issue its first new album in almost 17 years.

Speaking with City Weekly at the downtown dive Duffy's Tavern, singer/guitarist Gentry Densley reflects on Iceburn's career, beginning with its genesis in 1991, when Densley was studying music composition at the University of Utah. He had played in bands in high school with drummer Joseph "Chubba" Smith, and combined with Cache Tolman on bass and guitarist James Holder to form what Densley jokes was a "supergroup" of local musicians.

Steeped in music theory in his college studies, at first Densley wrote out sheet music for his dense yet sprawling compositions, fusing elements of hardcore, metal, experimental, classical and jazz. The band's influences are as wide-ranging as the Melvins, Helmet, Rage Against the Machine, the free jazz of Ornette Coleman and Miles Davis' Kind of Blue, alchemized in "a hardcore-metal, jazzy way," as Densley puts it. The band's name was inspired in part by the extremes of local weather, as well as the extremes of their sound, from visceral, grinding guitar noise to cerebral sax solos. "It's kind of our environment, our bipolar life," he says.

Iceburn's friends, local hardcore band Insight, were signed to Chicago-based Victory Records, which led to the label putting out Iceburn's first release, Firon (1992). (Insight's bassist Jeremy Chatelain would eventually join Iceburn on guitar for several years, and go on to co-found the revered indie-rock band Jets to Brazil, play bass in Helmet and, later, front the alt-country band Cub Country.) Similar attention led to a deal with another notable hardcore punk label, Revelation Records, to put out their next five albums, including what is perhaps Iceburn's most ambitious work, a kind of musical palindrome called Meditavolutions (1996). By that time, the band had evolved into the Iceburn Collective, staffed by Densley and "whoever I could get to play with."

Two of those five albums (1997's Polar Bear Suite and 1998's Power of the Lion), came out as joint ventures between Revelation and the band's own Iceburn Records. They all evinced Iceburn's evolution from written music to almost total improvisation in the free-jazz style. After 2000's Land of Wind and Ghosts (released on the New York experimental nonprofit label Mountain Collective), Iceburn seemed to melt away, reappearing rarely.

Over that time, Iceburn's members have busied themselves with other projects. Most notably, Tolman played with hardcore punk legend Walter Schreifels in the hardcore punk bands CIV and Rival Schools, and later with Bush's Gavin Rossdale in the alt-rock band Institute. Densley formed polyrhythmic punk band Smashy Smashy, and played guitar and sang with math-prog-noise outfit Form of Rocket, leading to he and FoR drummer Tyler Smith forming jazz- and prog-influenced doom/sludge band Eagle Twin. The duo has released two albums on the Southern Lord label and toured extensively. Southern Lord also took an interest in Iceburn, reissuing Power of the Lion in 2009—the same year as Eagle Twin's debut The Unkindness of Crows.

Iceburn seems fulfilling for them in a different way than their other projects. Densley says, "It's like who you are, at the core." This reunion was fertile for writing, and practices spawned new songs.

Pondering their second reunion—the first was for SLUG Magazine's 18th anniversary in 2007—Densley feels that Iceburn has come full-circle to the explosive sound of Hephaestus and Poetry of Fire (Revelation, 1993 and 1994). The title of the upcoming album, due in 2017, is The Heart of the Mountain is a Fiery Phoenix. It's fitting enough, since Iceburn playing again is like a long-dormant volcano about to erupt. "The new stuff feels like it fits [with the early material], without feeling forced," Densley notes. "It feels like we're naturally back to that same place, somehow."