Girl Child explores the trialsand treasures of being a woman. 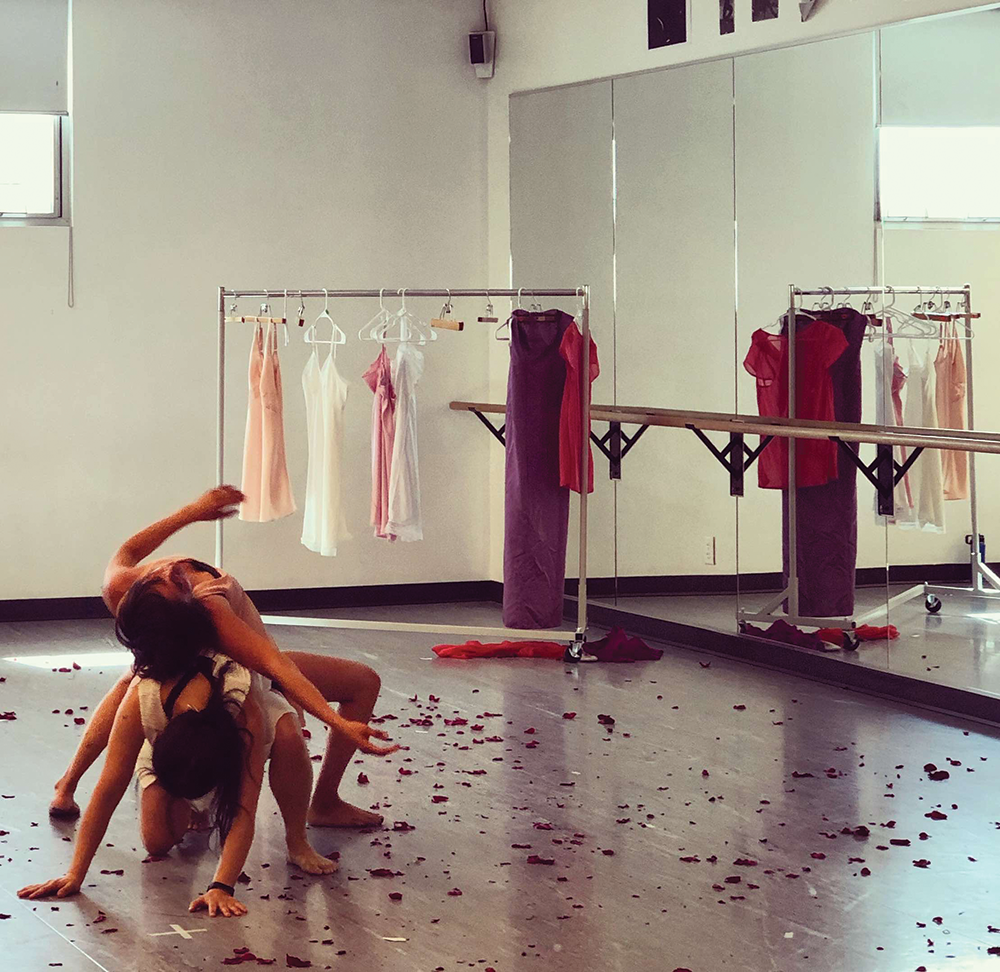 In a small, second-story dance studio on a recent Saturday morning, two women are flipping their hair, throwing their hips and eyeing each other like first-class rivals at a junior high school dance. The tension builds in step with the rising techno beat. Suddenly, hands slapping, they close the small gap between them. One woman jumps on the other's back.

"It's got to be sharp. It could even go faster," choreographer Karin Fenn says, watching from the edge of the room.

This duet—part of Fenn's new evening-length work Girl Child—is playful. But it's also violent. Fenn explains that it comes out of her own junior high school days. The Susie Hard Chicks, the mean girls, the bullies, were always looking for fresh fodder, Fenn says. She still remembers what it felt like to be picked on.

Mining her own physical and emotional hardships for creative content isn't something new for Fenn. In 2010, she contributed a tension-filled work about relationships for Ririe-Woodbury Dance Co.'s alumni performance Momentum. And her 2017 independent evening-length work Under Your Skin dealt with similar themes.

In beginning to think about Girl Child, Fenn says she found herself reflecting on her life as a single parent. "I realized that I was the third generation of women in my family raising children alone and outside of marriage," she says. "I didn't have a network. I had to do all my own. And then I started to think about how I am the glue that holds everything together."

Fenn says she is still surprised by how hard most women have to work in their lives. They are the mother, the housekeeper and the professional. They are expected to excel in every area.And on top of that, women have to confront sexual assault, which Fenn fears is still normalized and largely ignored; just look at the last round of Supreme Court justice nomination hearings, she says. In a time when women should be finding equality, it feels to Fenn like we are losing ground.

Discussing these issues can be challenging. It can be uncomfortable to face society's lack of progress. That is where art comes in to help. For Fenn, movement, theater and dance are powerful and useful ways to look at these human challenges.

Fenn has been a vital part of Salt Lake's dance scene for the past three decades. Her professional career began in 1985 with Ririe-Woodbury, and she remained with the company for six years before moving on to teach in Utah, Washington state and abroad in American Samoa. She returned in the early 2000s to enter the MFA program for Modern Dance at the University of Utah. Since then, she has performed locally with RawMoves Dance, as a guest for RDT and Ririe-Woodbury, and with dance theater company My Turkey Sandwich. Although most of her work during the past decade has been as the dance specialist at the Salt Lake Arts Academy, she has tried to keep her choreographic skills sharpened with occasional pieces of work submitted to the local Mudson works-in-progress series and with her own independent works.

Working with her dancers, whom Fenn praises constantly—"They have so much to say and are such mature artists"—the process dug deep into the emotional experience of being a woman. "It was very visceral," Fenn says, "almost like method acting. I worked a lot by [asking] questions. When was the first time you were cognizant of being a girl? What was that like? A lot of this work's story or narrative is generated by the dancers because I wanted to get as many perspectives as possible."

After the two animated dancers find their last pose—the question remains, who won the mean girl contest—the rehearsal dancers come in for notes. Penka joins Fenn at the side of the room. Girl Child, Penka says, connects deeply with her own experiences. "For me," she says, "this duet is about the chaos of being a young woman.I remember feeling like everything was the end of the world. It's so humorous. You want to look at your teen self and say, 'baby girl, you should relax.'"