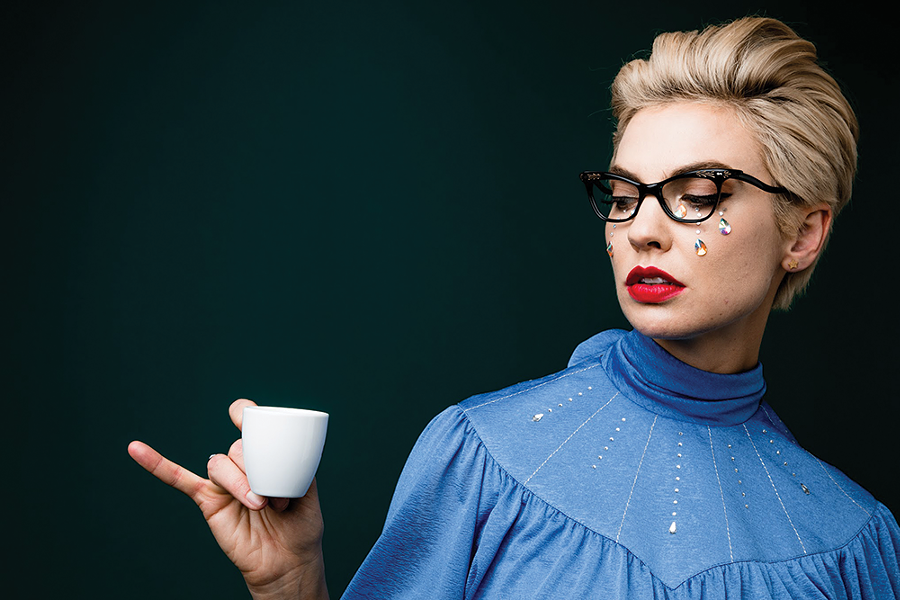 Mindy Gledhill's music has always been moving. Over the course of five full-length albums, her piano-and-guitar-driven pop-rock has spread to all corners of the globe, appearing in Super Bowl and Olympics commercials, scoring scenes on shows like Dancing with the Stars and The Good Wife, and contributing to the success of electronica star Kaskade's Grammy-nominated album Fire & Ice.

But this Provo resident's forthcoming full-length, Rabbit Hole, explodes in awe-inspiring new directions. In addition to its technical and artistic excellence, Rabbit Hole tracks Gledhill's religious transformation, which found her going from poster child for The Church of Jesus Christ of Latter-day Saints to loud and proud exiled Mormon. "Making this album and creating these songs was my therapy while going through that faith transition," Gledhill says. "Every record I've ever made is a chronicle of what I've been going through at that point in my life. Music is just how I process my life experiences."

On Rabbit Hole, those firsthand experiences skew from the terrifyingly philosophical—second-guessing her own existence, disappointing her loved ones and wearing pants to church in silent protest of Mormonism's sexism and patriarchal structure—to the humorous. Gledhill sneaks into her dark garage to make coffee, curious about the difference between an acceptable caffeinated beverage made from artificial ingredients and a natural one barred by church teaching. She finds devastating humor in the sadness of an adult woman baring her shoulders, wearing shorts and transitioning away from symbolic undergarments to regular old underwear for the first time in her life.

Gledhill admits that no one gets away easy from such strictures. Raised in California by devout parents, she spent two high school years in Spain while her family was on a mission before moving to Utah and attending BYU's School of Music. After graduating, she signed to a label owned by Deseret Books and became a Mormon superstar with 2004 debut record The Sum of All Grace, all of which made her eventual departure from the church even harder.

"I really stepped into that role of representing the church," Gledhill says. "So it was very difficult for me to come to the conclusions I was coming to in my mind while being a public persona to so many LDS people." That began to happen in 2013, when she was in the middle of writing and recording her last solo album, Pocketful of Poetry. "I was terrified of letting down my fans, my parents, my spouse and my children. But I would not trade this experience for anything. It has really transformed me as a person. It helped me grow up and realize it's totally OK to think about life on my own and make decisions without having to consult my religion. It's been beautiful."

That beauty is immediately evident on Rabbit Hole. "Bluebird" and "One" are tender acoustic numbers that delve into Gledhill's emotional center; "Boo Hoo!" and "Wild Card" are jaunty pop bangers that, with their narratives of outsiders shocking the squares, would fit right in on modern radio. The piano-led "Icarus" borders on Adele territory, while "Lines" is pure wordplay joy, Gledhill's vocalization of the title word blurring throughout the song from "lines" to "lies." In fact, what's most impressive about Rabbit Hole is how it universalizes Gledhill's struggle.

"I thought about how to toe that line a lot," she says. "I didn't want this to be an album only for people going through this specific experience within the context of The Church of Jesus Christ of Latter-day Saints—that's a very small percentage of people in the big scheme of things." Instead, Gledhill wrote Rabbit Hole so that anybody could relate to it. "Whoever you are, you're going to go down some kind of rabbit hole where your paradigm is turned upside-down and you're forced to look at life from different angles," she says. "Divorce, the loss of a loved one, really any kind of disorienting experience."

The hard part for Gledhill is facing all of that pain again. With a nationwide tour following her Jan. 25 album release show at Velour Live Music Gallery in Provo, she'll be performing for the first time ever in major markets like Boston and San Francisco, along with appearances at esteemed songwriter venues like City Winery in New York. "I feel like I've processed a lot of these things and I'm on the other side of it," Gledhill says. "I'm ready to move on to new conversations, but I'm facing a road ahead of revisiting old feelings. A lot of people are in the middle of experiences like this, though, and when you are, it's the most isolating, disorienting thing. So I'm excited for Rabbit Hole to get out there and connect with those people."

Gledhill takes those connections seriously. She's a regular guest on progressive Mormon podcasts, an activist and ally in LGTBQ circles and even a supporter of emerging Middle Eastern feminist fashion brand Agent GirlPower. She's vocal about finding the balance between being a parent and an artist, and she's still a prominent presence in Provo, where she's been performing since high school. Describing Velour as a special venue whose decades-long aura is hard to explain, she speaks lovingly of Happy Valley's music scene. "People are more prone to champion each other than compete with one another, which I love," she says. "That's really fostered the growth of the music community here."

No doubt Rabbit Hole will serve the same purpose for those struggling with religious and cultural impediments. Gledhill says she wants to achieve three goals with the album: to find the humor in sadness, to build bridges of love and respect in her Mormon community and to encourage the healing of others who leave their fold. She hopes to work as a producer for more artists moving forward but isn't sure what she'll write next. "My creative process happens when I'm ready to process my life experiences," she says. "I write when my body and mind feel the need to write. I don't know when and where that will happen next."