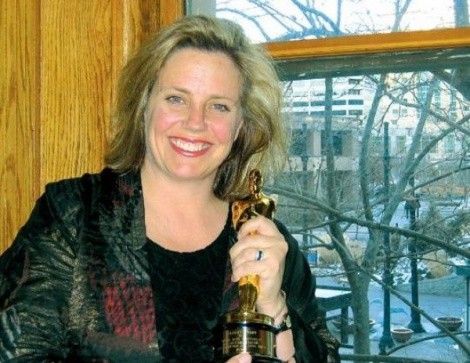 Filmmaker and philanthropic consultant Geralyn Dreyfous founded The Salt Lake City Film Center in 2002 and serves as its executive and artistic director. She was executive producer of the 2004 Academy Award winning documentary Born Into Brothels.

So, as a former academy award winner, have any one of the oscar nominees knocked your socks off?

Definitely Slumdog Millionaire and Milk. Slumdog did a really great job of breaking form with its combination of cinematography and adaptation. It has a special place in my heart, because I spent a lot of time in India. The film did an amazing job showing the violence and cruelty that happens to young children born into poverty.

I loved the form of answering the questions based on the peculiar life lessons that he accumulated through circumstance. And I thought Sean Penn was absolutely stunning as Harvey Milk. The screenplay was really well done. The use of archival footage was particularly innovative.

Who are you rooting for in the Best documentary Feature?

That’s a hard one for me. I have a film in that competition. I have a new film fund called Impact Partners, and we invested in the film called The Garden, which is nominated. It is sort of a David & Goliath story about community gardeners who try to stop a developer from taking over their property. We’re very proud it got nominated.

But I have to say my favorite documentary last year was Man on Wire. That was a spectacular film that again broke form and genre.

Residents enjoy the bounty of SLC Film Center’s many free screenings and discussions, complete with visits by world-class filmmakers. How do we rate?

Yes, the idea of using film as a tool for community and democracy building is unique. But the community is also unique. We have to pay homage to Sundance for 25 years of developing an audience that will follow the leadership of highly curated programming. People take risks coming to see things, if they trust the curator, that maybe wouldn’t happen in another marketplace. And thirdly, we have a nonprofit theater operator in the Salt Lake Film Society that operates the Tower and the Broadway. It is unprecedented with the number of its art-house screens. So what we do is unique, but the bigger story is the combination of these three organizations working together that could create a standard for what the future 21st century art house will look like.

So will you attend the academy awards on Feb. 22?

I will not. I will be at a yoga retreat in Mexico.