Democracy in Crisis project comes to an end. 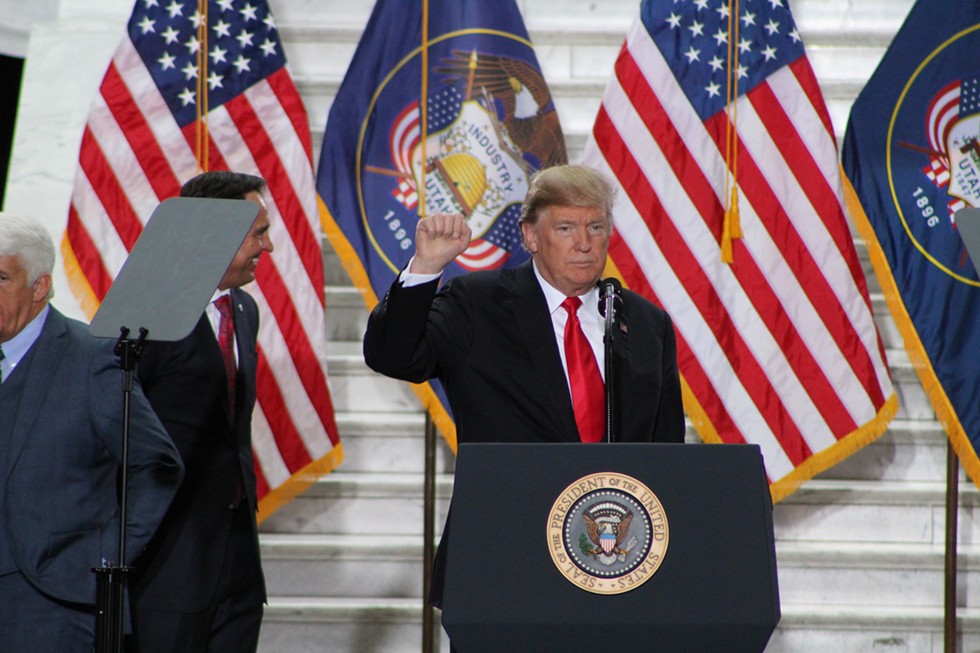 Editor's note: Democracy in Crisis was a column run regularly across several alt-weeklies and sporadically in ours.

This is the final Democracy in Crisis column that I'll be writing. I remember the urgency with which it started—I was super stoned in a Denver hotel room just days after Donald Trump was elected. Editors at various alt-weeklies had been wringing their hands about how to deal with him. Many of these papers had been militantly local during the Obama era—when I was managing editor at Baltimore City Paper, my unofficial motto was "militantly Baltimorean." But now it seemed that whenever someone picked up their local paper, they'd want to see some news from the alt angle—not that of the Nazi alt-right—but the independent, insouciant and fiercely opinionated voice of the alternative press.

More than 70 columns later, either that has changed, or I was wrong-headed from the start. The Trump regime has sucked up so much air from every other story that, while it is wildly important and has implications everywhere, I believe that each of these papers is better served following up on the way Trump's policies affect their local communities.

If it were like the old days and papers were fat and had money, a national column like this would be great. But this is a time of crisis for the press as much as it is for democracy. David Simon, creator of HBO crime drama The Wire, has said that the potential death of newspapers will usher in—or has already ushered—a golden age of corruption because there's no one left to watch City Hall. Except, of course, for the wretches who work for the paper you're holding in your hands.

A word of advice: Support them now or you'll forever miss them when they are gone. Since the beginning of this column in January 2017, my own home weekly, the Baltimore City Paper shut down. Former staffers immediately responded with an attempt to start a new venture. We partnered with the non-profit Real News Network and the Washington Blade and founded Baltimore Beat. Four months later, the people with the money pulled out.

Now, in a city that'll tally some 300 murders again this year, where we had a major police corruption scandal that will overturn nearly 2,000 cases, where the police commissioner was federally charged and resigned after only 116 days in office, we have no outlet like the paper you are holding. There's no single place where you can mourn for those murdered, mock the bullshit politicians and celebrate some artistic or culinary innovation or creature comfort quite like a weekly, and our storied city sorely misses it.

Art and music scenes everywhere are less cohesive, it seems—hardly scenes at all anymore. New writers aren't following their passions and learning their chops. People aren't doing insane experiments like I once did of listening to only local music for an entire year (music editors, take note).

The Washington City Paper, an early backer of this column, came dangerously close to death last year; an execution stayed only by the intervention of a rich local dude. The Bezos model seems to work in the nation's capital, but all markets can't count on that.

Throughout this endeavor, I've gotten countless emails from editors saying things like, "Hey man, we love the column, but can't afford it anymore." I've been on that side of the desk and know what it's like to come to a similar realization. It's brutal.

Between the first draft of this column and its final version, five fellow journalists were murdered in their own newsroom, an hour away from mine. Almost every reporter I have ever known has been threatened or maligned at some point, but this has seemingly gotten so much worse under Trump. We don't need the CNNs and MSNBCs. We need the Annapolis Capital Gazettes and all the small struggling papers that carried this column. And while we're at it, fuck you, Milo; fuck you, Trump.

I learned early thanks to Spy magazine that every good column has heroes and villains. Trump was one of Spy's main evildoers back in the 1980s, and he was the overarching villain of this column. But there were also all of those who enabled him and who he enabled, especially Michael Flynn, the alt-right goons of Charlottesville and the dark corners of the web, Project Veritas, and the ever-so-silly and sad "western chauvinist"™ frat of the Proud Boys, whose litigious western chauvinist™ lawyer once threatened legal action against papers carrying this column.

Foremost, among the heroes of this time are the 230 people arrested during the inauguration protests. My very first column detailed those protests, after I was gassed, pepper-sprayed and almost arrested by a mob of cops with covered faces who ultimately kettled a large group of protesters.

Those arrested broke a few windows. But because they wore black and were perceived to be part of a "black bloc" protest, they were charged with conspiracy to damage property. They each faced more than 60 years.

After a year and a half of paying two U.S. Attorneys to prosecute the case and full-time detective and part-time Trump-lover Gregg Pemberton to work it, several defendants have been acquitted on all counts, and the charges against many others have been dropped. This includes those against Elizabeth Lagesse, who taught herself everything possible about the case and went to nearly every proceeding, and filed suit with the ACLU against Washington, D.C.'s, police department.

But the real heroes of the column are the alt-weekly papers that ran it and the readers who went along for the ride. I am so grateful to have been able to have a home in each of your cities and towns. And I learned so much from having editors in Colorado Springs or Jackson Hole, Wyo., and so many others.

Fellow cohort Mary Finn spent countless hours filing FOIA requests—some of which we are still waiting on (fingers crossed) and editing the column. Brandon Soderberg was a tireless editor and a great friend and collaborator through all this. He and I will be writing a book over the next year, so if you enjoyed the column at all, keep an eye out for it.

Till then, much love and grim solidarity.