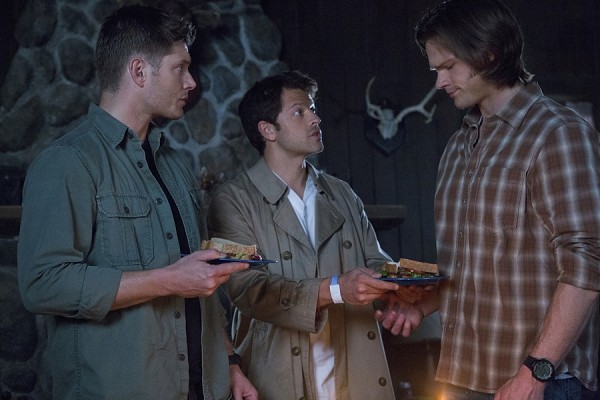 
Missing (ABC) Becca (Ashley Judd) finally saves her idiot teen son from kidnappers, because (as will be referenced several times) she’s a badass ex-CIA agent. This show seems to be “missing” from ABC’s fall schedule—ha!


Grey’s Anatomy (ABC) In a twist that’s only happened seven times before, the Season 8 finale of Grey’s Anatomy will be “heart-wrenching” and “the doctors’ lives will be in jeopardy.” Slow clap for Shonda Rhimes, everyone.


Scandal (ABC) A shocking announcement rocks the presidency, and only Olivia and her pretty PR team can save ’Merica. Let’s keep that clap for Shonda going …


Rules of Engagement (CBS) That long-forgotten surrogate baby being carried for Jeff and Audrey may or may not finally show up, Russell gives up perving on women, and this sitcom will live for 30 more years.


Person of Interest (CBS) Reese must save an apparently lousy psychologist (Amy Acker) from being murdered by a crazy patient. In case you forgot, this is the show about Jesus (Jim Caviezel) fighting crime with science.


The Mentalist (CBS) Patrick Jane is foiled by Red John yet again, so he drowns his sorrows in booze and a cocktail waitress (Emmanuelle Chriqui—score!) and guns down one of his own team (d’oh!). Your mom and her cats will be quite upset.


Who Do You Think You Are? (NBC) Paula Deen digs up 150 years of artery-clogged ancestors.


Grimm (NBC) A string of bloody supernatural murders terrorize Portland, Ore., but Nick has a bigger problem: His wife may finally learn that he’s a monster hunter and, even worse, that he’s not even getting paid extra.


Nikita (The CW) It’s the final showdown between Nikita and the lamely named Percy at Division—but can she take him out before the president and/or The CW blow the joint up?


Supernatural (The CW) It’s the final showdown between the Winchesters and the awesomely named Dick Roman at SucroCorp—can they take him out before he enslaves the world with Turducken sandwiches? This is serious, people!


Harry’s Law (NBC) Cases in the legal drama’s series finale include murder, discrimination and a geezer fired for popping out his false teeth at work. Git ’em, Matlock!


The Apprentice (NBC) Finalists Arsenio Hall, Clay Aiken and Aubrey O’Day vie to either get “hired” by Donald Trump or form the world’s most frightening Black Eyed Peas tribute band.


The Cleveland Show (Fox) Cleveland Jr. and weird girl Daisy (voiced by Rashida Jones) attend the prom as a lesbian couple. Glee is just ruining everything.


The Simpsons (Fox) Lady Gaga (Lady Gaga) shows up to teach Lisa and the whole town of Springfield that it’s OK to be different. Glee is just ruining everything.


Bob’s Burgers (Fox) Bob’s big break on a local TV news-cooking segment is ruined not by Glee, but Gene in a Sasquatch mask. Whew …


Sherlock (PBS) Moriarty drops the “final problem,” and a tabloid reporter reveals some kind of “shocking truth” about Sherlock. Oh, like anybody believes tabloids.


House (Fox) Following a one-hour series retrospective/navel-gaze about eight seasons, the series finale of House finds Dr. Cranky treating a drug addict who—wait for it—forces him to face his own demons (no, Cuddy ain’t among them).


Glee (Fox) McKinley High’s Class of 2012 prepares to graduate and move on to their bright futures as office temps, amusement-park workers and dayshift strippers—but not before euthanizing a classic pop tune or five.


The Middle (ABC) Mike’s brother Rusty (Norm MacDonald) is getting married—soon and, according to the invitations, at the Heck house. You-know-what ensues.


Law & Order: Special Victims Unit (NBC) The SVU team investigates the death of a hooker at a bachelor party. Slow clap for Dick Wolf, everyone.


American Idol (Fox) Music is dealt a double blow as the nation crowns its next Billboard footnote … and Aerosmith performs. Steven Tyler is just ruining everything.