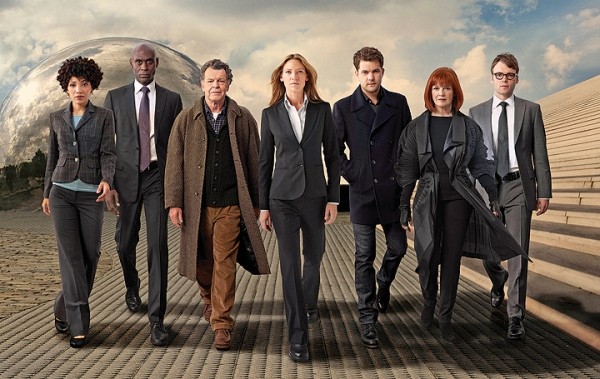 
The Office (NBC) Andy stages an office takeover to get his job back; Robert California and Nellie exit for good; the documentary crew still doesn’t have enough footage.


The Vampire Diaries (The CW) The pretty vampires and werewolves of Mystic Falls exchange meaningful gazes and fluids, and prepare for Season 4 in the fall.


The Secret Circle (The CW) The pretty witches and hunters of Chance Harbor exchange meaningful gazes and fluids, and probably shouldn’t prepare for Season 2.


Undercover Boss (CBS) The CEO of MasTec dons a ridiculous disguise and goes unnoticed by his dense, whiney employees. This is an Emmy-nominated series.


CSI:NY (CBS) The team works to track down the perp who shot Mac, who hangs between cliffhanger-y life and death—like the series and the future of Who theme songs.


The Finder (Fox) In his most important case ever, Walter must find his dying father’s long-lost first love. Related, the Finder cast will have to find new jobs now.


Fringe (Fox) The Fringe team races against time to save the world (this one, not that lame Other world), but still makes time for a weekly, revelatory moment or five.


Once Upon a Time (ABC) Emma’s quest to save the fairytale people of Storybrooke concludes and … Wha? This has been picked up for another season? Really?


Desperate Housewives (ABC) In the two-hour series finale, the women of Wisteria Lane come together for a heartwarming farewell … to that bitch Teri Hatcher.


Survivor: One World (CBS) No Tarzan, no peace.


American Dad (Fox) Stan takes Steve to Mexico to make a man out of him and they’re kidnapped by a drug kingpin, thus setting up Season 5 of Weeds.


How I Met Your Mother (CBS) At Barney’s wedding in the future, the gang reminisces about the time they still didn’t reveal the identity of the damned Mother again.


Two & a Half Men (CBS) Jake makes a decision about joining the military; Alan does something pathetic; Walden occupies space; CBS pre-sells 20 more seasons of reruns.


Mike & Molly (CBS) The big-boned couple finally gets married, show over! No? Renewed for another season of lazy fat jokes and canned hilarity? Huh.


Bones (Fox) In a twist only viewers of the past six seasons saw coming, Bones becomes a murder suspect and only Booth can exonerate her. Oh, and that baby is still around.


Gossip Girl (The CW) Will Blair and Serena’s friendship survive the tumultuous season finale? Whose man will end up with whom? What’s that Cobra Starship guy doing here?


Hart of Dixie (The CW) A storm hits Bluebell and kills Dr. Zoe and every idiotic Southern stereotype in town, fade out, series finale. Or not. Just thinkin’ out loud.


Private Practice (ABC) Amelia goes into labor, Violet and Pete realize what they mean to each other, Addison makes a difficult choice, and I pretend to know any of these people.


NCIS (CBS) The NCIS team engages in a game of deadly cat-and-mouse with a charismatic terrorist who’s threatening to blow up the east coast.


NCIS: Los Angeles (CBS) The NCIS: Los Angeles team engages in a game of deadly cat-and-mouse with a charismatic terrorist who’s threatening to blow up the west coast … hey, wait a minute …


90210 (The CW) The blonde one suddenly gets a job in New York and leaves, the brunette one makes a difficult choice, and I again pretend to know any of these people.


Suburgatory (ABC) The ‘burb of Chatswin celebrates Mother’s Day—except for Tessa, who has no mom, and Dalia, who has no discernable human traits. Also, Lisa may be adopted. All this, and James Ingram! “Ya Mo Be There”!


Criminal Minds (CBS) In the two-hour season finale, the BAU team deals with a pair of bank-robbing serial killers (Tricia Helfer and Evan Jones) who’ve taken one of their own agent as a hostage (money’s on Reid—it’s always Reid). There’s also a wedding (probably JJ and Will), yet another dramatic exit (definitely Prentiss) and many a squinty, ponderous grimace from Hotch (best furrowed brow in the business).